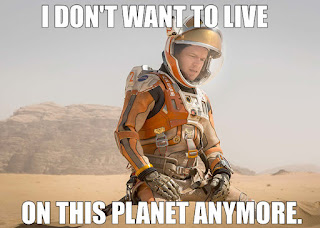 In space, no one can hear you grow potatoes. That’s your only warning that there’s going to be spoilers for the Martian in this post.

When I first saw the trailer for the most recent entry into the genre “Hey, Let’s Save Matt Damon From Somewhere Expensive” called The Martian, I had many different emotions. One of them was hungry, because I had just gotten popcorn and I wanted to start eating it but I also wanted to save it for the movie. The other was, “haven’t I seen this somewhere before?”

No, I don’t mean the whole “Let’s Save Matt Damon From Somewhere Expensive” Genre. That’ s an entire genre, like people getting stuck in buildings and needing to save it from terrorists or burglars. The “Die Hard in a… “Genre. No, I’m talking about the Sandra Bullock scream fest Gravity.

The situations are similar: one person, stranded alone against the elements. The focus is the same, will this person get rescued, or will they end up in space, with on one hearing them scream. Both are beautifully filmed. And both star people that have more Oscars than Leonardo DiCaprio. (One day… one day he’s going to win one, and these jokes won’t be as funny. Just kidding. They always will be. Nicolas Cage has more than him.)

I’ve got to say, the Martian handles it a lot better. By “it” I mean an astronaut that’s been trained for terrible things to happen being stranded in the middle of nowhere.

The Martian, far from being a sequel to John Carter of Mars, is about a group of scientists who are exploring the red planet, having set up a temporary habitat called a “Hab” on the planet. One day, towards the end of the planned 30 day mission, disaster strikes, because somehow a mission exploring another planet isn’t exciting enough, and Commander Melissa Lewis (Jessica Chastain, in one of the many movies starring Jessica Chastain this Fall) must decide whether to leave the planet or stay. While the crew is working their way to the escape ship, Mark Watney  (Matt Damon) is hit by a piece of debris, and the crew thinks he’s dead.

Since this is called The Martian and it’s about Matt Damon surviving on a planet by himself, you can guess he’s probably not dead.

It turns out, yes, spoilers everyone, he wasn’t killed, just hurt really badly. He awakens to find that he has no way to communicate, diminishing food and resources, and even if someone knew he was alive they wouldn’t be able to get any supplies to him for about 400 days. He then spends the next hour and a half slowly giving up while screaming and dealing with all the problems he left back on Earth.

No. I said it was different than Gravity. (Some might call it… Anti-Gravity if they were just making cheap jokes. I’m here to make cheap jokes. You’re welcome.) Mark actually, because he’s a scientist trained for situations like these, “Sciences the shit out this”. Because throwing in casual profanity when you’re on a planet by yourself is allowed. Mark sets up a livable habitat, grows vegetables, and tries to survive long enough to get off the planet successfully.

Over the summer I gave a positive review to Tomorrowland with the disclaimer that I was fully aware that it wasn’t a good movie, it was just really hopeful and I liked it. The truth is, as much as people complain about things like “Dark Superman” in the Man of Steel or “PTSD Iron Man” in Iron Man 3, we keep going to see those movies. What separates out The Martian from all of that is how upbeat it is.

The NASA officials attempting to spin Mark’s Death is viewed as evil. And they make it very clear in every scene that Mark knows that his crew had to leave him, there was no way in that world they could have thought he was alive. Yes, the commander has a few moments of being sad, but ultimately there’s not a lot of angst where Mark sulks around the planet, deciding that it’s just his time to die.

The upbeat message is what really gets to me about this film. Here we have a man who’s literally in the worst case scenario.  He is by himself, and no one is coming for him. They don’t even want to aim their satellites at the location of the Hab for fear of broadcasting a dead astronaut to the world. But what wins out every single time is this idea that things are going to be ok if they just keep working toward the goal of being saved.

And here’s the thing, Mark doesn’t always think that things are going to be ok. That’s abundantly clear. He thinks that if he just keeps working, maybe it will take his mind off his impending death. Maybe if he keeps working, eventually things will be ok, because why not: they should be ok. Even as he runs out of food, he still manages to work towards his ultimate goal of being rescued or at least leaving a corpse that was working hard while trying to be rescued. That’s what I really like about the film. It’s essentially a long piece of work dedicated to the idea that if things suck, keep moving forward. Even if you die alone on a barren planet, you’ll at least leave a corpse that looked like they were trying to do something.

I could go on about the special effects, but at this point, special effects are just background noise. I could go on about scientific accuracy but Neil de Grasse Tyson is smarter than me and will probably do a better job. (They got there with rockets, right? We’re no longer using giant balloons leftover from the Macy’s Thanksgiving Day Parade? I didn’t see Garfield up there so I’m assuming it’s pretty accurate.) My point is, that I could go on, but this movie was actually pretty cool.

My rating: Four out of Five potatoes.
Posted by Bad Shakespeare at 6:00 AM