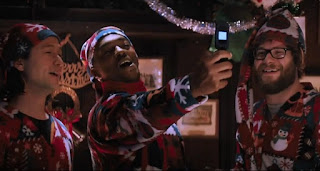 There are many go-to stories that writers seem to like. The Prince and The Pauper is a pretty popular premise for writers to purloin. Zombies seem to be back “in”. But as much as people seem to say “hey… isn’t just the rewrite of X” there’s one story that people like to retell as much as possible.

It’s been remade, revamped, modernized, traditionalized, applied to the Fourth of July for some reason, used in sitcoms, TV Dramas, superhero stories… you name it, three ghosts have shown up at some point and scared some dude into accepting Christmas (or the Fourth of July… seriously, what was up with An American Carol? Did anyone stop and ask what madness that was at any point in the production?)

While Scrooged, despite being set firmly in the 1980’s, still remains the superior version of A Christmas Carol, there are still attempts at making a new version of it. And in the most recent movie, The Night Before, they seem to succeed in taking the formula and playing with it in a fun way.

The Night Before is about a young man stuck in the past. Ethan (Joseph Gordon-Levitt) is a man-child who refuses to grow up following the death of his parents at the hands of a drunk driver. His buddies, Chris (Avenger Anthony Mackie) and Isaac (Perpetual Man-Child Seth Rogen) always ensured that he wouldn’t spend Christmas Eve alone with a series of traditions. Traditions that sadly, become endangered, due to his buddies moving on with their lives, Chris becoming a famous athlete and Isaac having a kid. They set out for one last night of sheer epic fun.

Of course, you could have gotten all of that from the trailer and zero of that has anything to do with A Christmas Carol, so why am I comparing the two?

(Spoilers to follow… or as may spoilers that can show up for a movie that’s not really a mystery. You just have one question: Is James Franco in it? Answer to follow as well.)

What separates out The Night Before from a traditional comedy, and what makes it sort of a remake of A Christmas Carol without the Ghosts or old dude screaming at kids to buy him geese for Christmas Dinner as if that’s something of a resolution, is how it deals with all the same material as Dickens’ classic without copying it word for word.

This is a movie that’s very rooted in the past, present, and future of these young guys’ lives. Ethan is stuck in the past, dwelling over not really the death of his parents, but the fact that he’s going to lose these guys to what looks like bright, promising futures. For one, Isaac is having a kid, and seems to be calm, cool, and collected… but is freaking out. He’s constantly worried that he’s going to mess up his kid’s life. Chris is making it as an athlete, but not only at the expensive of his friends, but also at the expensive of himself – he’s using steroids and is obsessed with getting in good with the popular members of the team.

So… Isaac, representing the future, Ethan, representing the past, and Chris, representing the present, all are looking for this giant party where naturally, everything is going to come to a head. The movie covers the ground for everyone: they all have to maintain that past, present and future without losing who they are in the process.

Or maybe they want to lose who they are?

For someone stuck in the past, Ethan is relatively well adjusted. He needs to move on from his fear of settling down. It’s not until he can get past that (with a grand move and guest appearance from Miley Cyrus) that he really can move on from the past, but an epilogue shows us: he manages to still maintain his friendships.

Isaac is afraid of the future, while looking cool. It’s only once that he accepts that future, and that he’s afraid of it, that he’s able to work with his wife. It’s actually one of the better “man child grows up” roles from Seth Rogen, because he never really is a “child” the way he is in some of his more frustrating roles. He starts this very mature, and only devolves when he’s afraid that maturity is eating him up and turning him into someone new.

Then there’s Chris. I found Chris to be an interesting character. Not only because hey, what’s Falcon doing with Joseph Gordon-Levitt and Seth Rogen? But because he is the one that we see in the most pain right away – shooting up while talking to Ethan on the phone. This immediately puts the past and the future in a better position than the present. While the past is messed up, and the future is in peril, they are relatively together for the time being.

In fact, the closest this movie has to a ghost figure is in the enigmatic Mr. Green, (Michael Shannon), a pot dealer who seems pretty mystical. And I’m not being cryptic, he’s mystical in that all of his hits seem to give these guys visions of what’s going on in the past, present, and future. The only thing that really bugged me is when he turned out, quite literally, to be an angel as opposed to just a mysterious figure that dispensed advice.

There’s a lot going on in this movie. A lot more than the trailers would indicate from the few trailers of Seth Rogen freaking out on drugs, and Anthony Mackey being “Home Alone’d” at one point. It was one that really did tackle the idea of growing up, and that loving or hating Christmas may be due to the fact that it is a recognizable milestone. We all have Birthdays or some other event that marks time on a planet that, quite frankly, doesn’t mark time the way we think it does. But Christmas is loud. It’s in your face. It’s a celebration that signifies that the end of the year is very close. It’s difficult to escape. These three men have to face the passing of a new year in a very loud manner.

One of the best things about this movie is the closing shots of all of them together, celebrating Christmas. Although they aren’t running around the city, looking for a mythical party or  adhering to all their old traditions – the idea of their traditions ending holds heavy over most of this movie – they are still enjoying each other, and that doesn’t have to end, no matter what the age.  As long as you have good friends and family to spend the time with, that’s where the importance lies. And that’s really the message of A Christmas Carol (And this movie) – it’s the people that we choose to spend our time with that make things better. You can’t really spend time dwelling on what you’ve lost, or what’s going to happen, you have to make the now that important.

Not bad for a movie that includes Miley Cyrus in a duet with Joseph Gordon-Levitt. 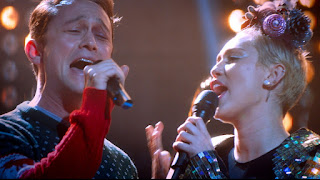 Posted by Bad Shakespeare at 4:38 PM