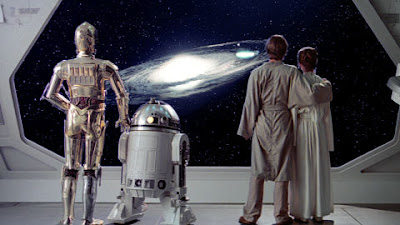 On Thursday, December 17th, I prepared for the new Star Wars movie perhaps the only way I really knew how to prepare for it. By attending a marathon of every single Star Wars Movie there had been up until that point. Excluding the Holiday Special and the two Ewok specials. But we don’t discuss those.

It was technically Thursday, December 17th as we got to the movie theater, much in the same way a cat is technically a tiger… the first movie started at 1:00 a.m. in order to give us maximum time to watch all of them, in chronological order, and still have enough time for breaks. For a brief moment I debated skipping the Phantom Menace, if only to not hear the Dark Lord of the Sith yell “yippee” when he gets his way, but, I wanted to attend all of them.

I should also point out that this is an odd time of year for me. You see, I’m finishing up finals, which means sleep is already at a premium for me this week as I squeeze work in between school. In fact my final class was Wednesday from 7:30 p.m. - 10:00 p.m. For those keeping track at home, that meant I had about three hours in between marathon and wrapping up my last class. So, in the long run maybe signing up for a 17 hour Star Wars Marathon may have not been the smartest idea. This week.

I never was very smart, when it came to Star Wars.

I grew up with Star Wars. My dad introduced me to the adventures of Luke, Leia, and Han early on in my life. He did so proudly. It was a great story. A farm boy finds out he’s really the son of a powerful space wizard and he has to go fly a space fighter to destroy a planet? Incredible. Then it go better… it turns out that the farm boy is related to the bad guy? What? That blew my little mind. Then there was Han Solo. He was everything, goofy, smart, he did his own thing, he was a bad boy that flew a spaceship unlike any other space ship, ever, the Millennium Falcon.

Everyone wanted to be Han Solo. At least I did.

My favorite Christmas Memory was when I lived in New Jersey. We lived on base housing, so I was afraid that Santa wouldn’t be able to get in since there was no chimney. On Christmas Eve there was a knock on the door. My parents told my brother and I to get it, and Santa was there. The big guy himself, in the flesh, at our door, who had to stop by early since we didn’t have a chimney. I don’t remember anything else he gave us, except one thing. A giant Millennium Falcon toy. It had the removable plates so you can hide your action figures when the storm troopers came by, it opened up so you could see inside, and the cockpit door opened just right. It was perfect. I spent hours coming up with ways Han would save everyone.

So going to see all the movies on the big screen was exciting for me. Yes, even the prequels. I’ll be the first to tell you that the prequels aren’t very good objectively. They’re poorly written and not very planned out, despite having the hindsight of being written after that original trilogy. The acting from most is wooden. And there’s a sense of “hey, look at what we can do with CGI” for about 90% of the film. But you know what? It’s Star Wars. I loved seeing them back up on the big screen.

It was odd watching it with a theater full of people with the same agenda as me: to marathon them all before the new one. Some people were dressed up in costume. My friend Kim and I referred to them as rookies, because you don’t dress up in costume for a movie marathon. Our comfy pants and T-Shirt ensembles were perfect for the night (and day) allowing the versatility to relax while still being able to breathe. But everyone laughed in the right… or in a few moments, the wrong but totally appropriate… spots. Despite the prequels reputations as being awful, there was still reverence for what we were watching: the story of a young wizard-knight seduced by the power of the dark side, wishing to save his love.

I’m not sure what else to break down here. Jar-Jar was still terrible. Too much CGI. Liam Neeson was gone way too soon. And Darth Vader shows up five minutes before the end, when everyone expected him to show up. They were the prequels.

The prequels ran until about 7:30 ish, so we had time to go get breakfast. I’m fortunate that Kim is an expert at food, so we were able to bypass the eight bag of popcorn and the stale hot dogs for a nicer place that involved sitting down and having hot food provided to us as we sat in our clothes we’d been wearing for so long now. As people were getting up for work, we had downed three entire movies that comprised the Star Wars Saga.

We got back to the theater to hear the tail end of a trivia contest that there was no way we were going to win while wearing T-Shirts that said “Star Wars” our dedication to the marathon and another guy was wearing a screen accurate Boba Fett Costume. But we were ready to start the Original Trilogy. The yellow words came up that said “A long time ago in a galaxy far, far away…” then the words “Star Wars” hit the screen. It was beautiful. We watched another three movies, the ones I grew up with. We cheered when the Death Star blew up. We laughed at Leia calling Han a nerfherder. Some nerd next to Kim complained when “A New Hope” popped up on the crawl because it meant it was the remastered versions. There was slight cringing when Luke kissed Leia. Really. We cut out Han shooting first when we re-edit these things, but you can’t cut out that kiss. now THAT’s arrogance, George Lucas.

Oh, one other thing. Anyone else notice that a LOT of astromech droids die in these things, except R2D2. He’s either very lucky, or he’s the one behind these deaths. Just throwing that out there.

It was an incredible mix of camaraderie and anticipation. Everyone wanted to watch the movies and give them respect, but we were ready. Ready for Star Wars: Episode VII The Force Awakens.

I know a lot of people haven’t seen it yet. And you know my feelings on dubbing certain things as “spoilers.” I still don’t agree that the “plot” of the movie, insofar as it’s one line like “Rocky Balboa fights for the championship” or “A boy sees a psychiatrist because he sees dead people” is really a “spoiler”. So I was concerned when we knew of Episode VII as “the continuation of the Star Wars saga and nothing else.

But I agree, it’s better to go in fresh and know nothing about the movie. So, no spoilers in this review. (Spoilers come Monday.)
That being said, I’m not going to ruin it here. My first, non-spoiler impressions was, (and apologies to Phineas and Ferb) “I was blown away, much like Alderaan.” It movie had time to not only meet and acknowledge all of my expectations, but it did so on the way to exceeding all of them. Simply put this is the first time I’ve felt this way since the first time I saw the original Star Wars. it was amazing. The CGI was kept to a minimum. BB-8, the soccer ball droid, was incredible. Character backstories were expertly weaved into the existing characters. There were references and acknowledgements to the characters that came before and made this galaxy what it was. The old movies are revered in a way simply not done by movies today. 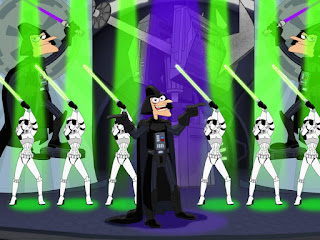 I am looking forward to sharing all my thoughts. But for now I want everyone to know about the experiences in that theater with 100 other people who loved the movie as much as I do.
Posted by Bad Shakespeare at 8:19 PM