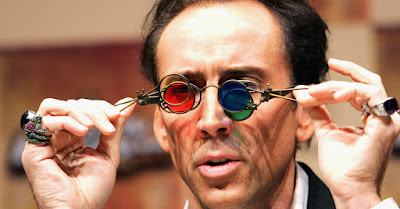 Well, it’s that time of year. The Christmas Decorations are either down or staying up until they become a glorious reminder of Easter. Holiday Sales are slowly morphing into a reminder that Valentine’s Day is the next Holiday you have to look forward to, and that doesn’t come with days off.  Star Wars: The Force Awakens has blessed our screens and will continue to do so up until Episode VIII at this point. And sadly, movies switch from their high profile Oscar bait to… well, let’s just say, “the rest.”

Yes, it’s time for Good Bad Movie Season, and our Protector over this particular season, St. Nicolas Cage. For who knows better than how to make a bad movie better than the King of all bad movies, Nicolas Cage. And I say that affectionately. He is the King, in so many ways.

Prestige Season is always a little bittersweet for me. On the one hand, a lot of good movies come out. On the other, I tend to avoid them so I can give you a fresh perspective during the Oscar Movie Marathon coming up in February, and yes, Bad Shakespeare and Crew will be there in all of our glory. So I don’t have a lot of superlatives. Hunger Games was a little disappointing. Star Wars was amazing. So was Creed. Spectre was pretty cool, if you like throwbacks and thought experiments where the movie that was being parodied stole from the parody. Crimson Peak was chock full of Tom Hiddleston and ghostly goodness. And Jessica Chastain totally nailed the fourteen or so movies she was in.

Anyway, it is time once again for us to bow our heads and say a little prayer to St. Nicolas Cage so he blesses us with a good Good Bad Movie season, and I have to tell you, it looks awesome, between Deadpool, Batman v. Superman, and Kung Fu Panda. But, time will tell, as it holds us over between our last awesome movie, and Captain America: Civil War.

Bless us oh, Cage,
For these they gifts we are about to receive
Including straight from the page
Of Pride and Prejudice… and Zombies

One is faster than a speeding bullet
The other is dressed like a bat
But together they’ll fight
Batman v. Superman is where it’s at

Tom Hiddleston will sing with a country twang
The Huntsman will war, without Snow White
The Rings will scare us with tooth and fang
And Melissa McCarthy is the Boss – A comedy out of sight

There are so many others, I can’t fit in here
But Cage bless those with the power you send
As I go off to get more beer
And may this Good Bad Movie Season can wrap up… Amen.

There you go! Your thrice annual reminder that I’m not really a poet, but I enjoy myself. How many of those movies will I end up getting to? Hopefully a good chunk, so I can report back before… SUMMER MOVIE SEASON gets into full swing! We’re only four months away!
Posted by Bad Shakespeare at 5:12 PM