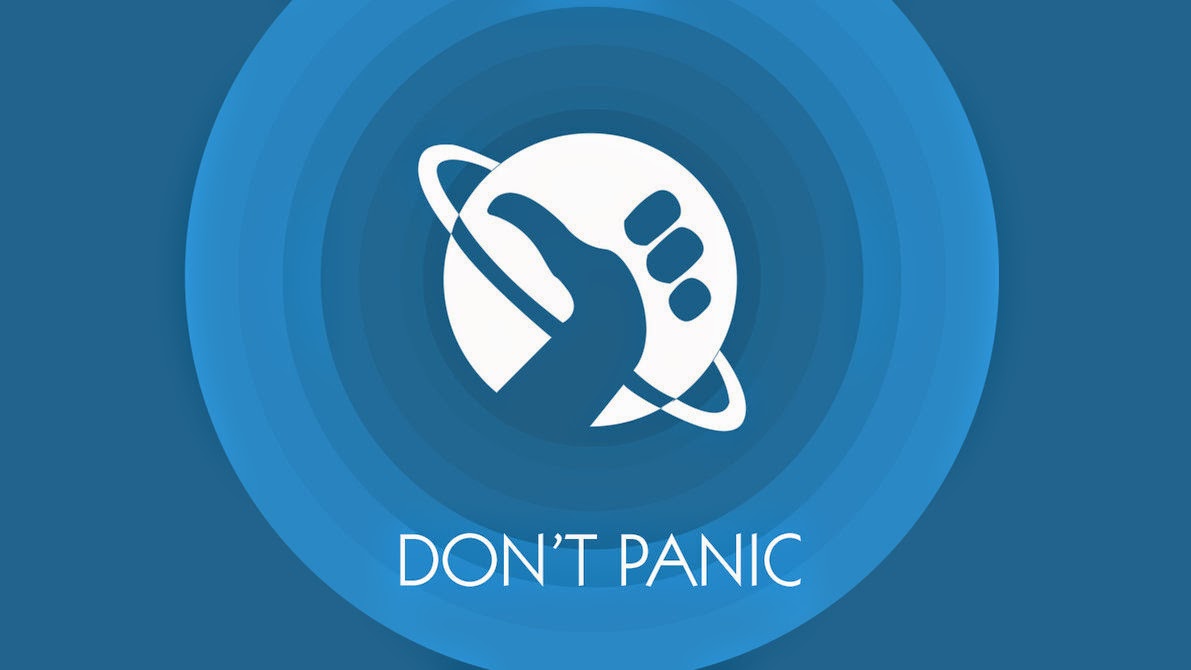 “In the beginning the Universe was created.
This had made many people very angry and has been widely regarded as a bad move.”
The Hitchhiker’s Guide to the Galaxy

Today in Towel Day! And why do we celebrate Towel Day? To celebrate the works of Douglas Adams, writer of, among other things, The Hitchhiker’s Guide to the Galaxy and everything that follows it. It’s a great day to be a member of a planet that’s listed in the guide as “Mostly harmless.”

For those who have not yet read The Hitchhiker’s Guide, I would normally spend this next paragraph telling you all about it. I’m going to do you a favor and I’m not going to do that, rather, I’m just going to say that it involves the destruction of Earth, then a story starts that questions the very nature of existence, why the universe was created, and of course, fish. And let’s not forget the answer to life, the universe and everything (which I’m sure you’re all familiar with) and my basic philosophy: whether or not we are asking the correct question.

Why celebrate Towel Day? It’s a day to celebrate Douglas Adams and what his works mean to us. This was a man that just put his thoughts out there, and let it go. He wrote exactly what he wanted, and it turns out a lot of it wasn’t just instantly quotable, but infinitely repeatable. For me, it was really the first book (or radio show, or mini series, or however you first consumed it) that allowed me to realize that great thinks can sometimes be hidden in unlikely sources. After all, this is a book series that destroys the Earth, names dolphins smarter than humans, has terrible poetry, and references God several times in the strangest ways.

Then there’s that damn 42 that everyone keeps talking about.

It’s important for us to remember that sometimes wisdom can be found in just about everywhere. It doesn’t have to be some big book dedicated to telling you how to live your life. It can be a TV show, movie, small time blog with an incredibly handsome blogger working behind it, a comic book. I think sometimes we put too much faith in the things that are **supposed** to give us inspiration that we tend to ignore the inspiration that is around us all day. Many of my life lessons can be taken directly from Hitchhiker’s Guide. The biggest of course, is 42.

For those of you who haven’t read it (and I don’t know why you haven’t) 42 is given as the answer to the big, vague question: What is the meaning of it all… the life, universe, everything. And a computer, after a spectacularly long time (7.5 Million years), comes up with the answer 42, and then posits that if you don’t understand the answer, then you’re clearly not asking the right question.

In order to come up with the right question, another computer was built. It was called, “Earth.”

My favorite part of the whole things is that for years, people have speculated as to why he came up with this number. His response is perfect: He knew it had to be a small number, and he settled on 42. No real reason.

I love this man.

But while this was a joke given by a man with a strange sense of humor - later books would decide that both The Answer and the Question can never be known in the same Universe - It has gotten me to think about “are we asking the right question?” Everyone spends so much time trying to think about the answer, they don’t come up with the correct question. Sometimes that’s a little harder.

There are a million other parts I can point to that changed my life as a result of this book. From the protagonist, Arthur Dent having to learn to just go with it, no matter how weird things got. (Including Thursdays.) To always remembering your towel when you were hitchhiking… because people would be convinced that you’d just forgot everything else and would help you out. To not panicking… that one is the most important. And the most important, of course, not letting a vogon read you poetry. It’s all there. But the best gift I ever got was this book, with no ideas of what I should think after I’ve read it. I think you should, too, and pull your own thoughts.

The book changed my life. I put it up there with all the great books, for me at least. It (along with Doctor Who… where is my Doctor Who post… and Star Trek) were my first real ventures into geekdom. This is back when this stuff wasn’t celebrated, people. You’re all walking around with your TARDIS shirts all comfortable, but there was a day that your knowledge of Time Lords and Warp Engines weren’t as celebrated as they are today.

So, speaking of celebration, I think it’s important that we all raise our towels in celebration of the man who was… well, just a man. But a man who was very important to me. A man who’s works have gotten me through the good times and the bad.

Happy Towel Day, Doug.
Posted by Bad Shakespeare at 4:30 AM