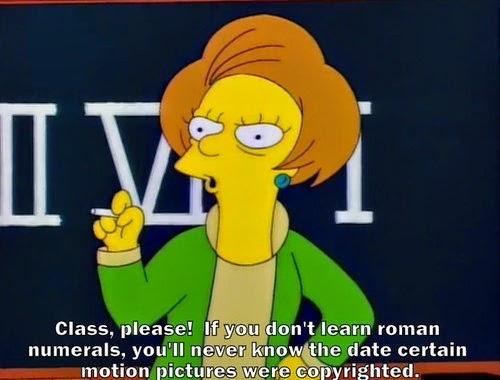 Back when I decided to leave the teaching program, I wondered how much more time I was going to spend on this blog talking about teaching issues. Yes, it’s sort of morphed into a science fiction/comedy/whatever I feel like writing that day blog, but the original intent was going to explore my thoughts on teaching, as well as my thoughts on the state of education today. Originally, I wasn’t going to discuss it anymore. Then I had a thought… everyone stare out into space with me for a minute with this thought, as you sure envisioned me doing… but I thought about if for a second… I’m the perfect person to talk about some of the issues affecting classes today, because part of my frustrations are tied up in what’s going on out there now. So I’m going to cover what I feel I need to cover.

Second little caveat: The following post contains opinions on not one but TWO controversial topics. I believe these are different opinions than most, but since it’s already caused a problem when I announced I was going to write about them, I’m giving you that caveat. Feel free to disagree. Feel free to agree. But as with anything, I don’t want you going away from this blog post angry. I just want you to go away.

Recently, two big news stories have hit the internet that not only involve education, but hey involve reactionaries commenting without thinking about it, and ultimately, fighting and name-calling. I’m  not against any of these, but in a more enlightened fashion. Also, all of the fighting and name calling miss the big picture of what’s going on.

Firstly there’s the story out of New Hampshire, which, depending on which website you decide to read, a brave father was bravely handcuffed for fighting the smut his child had to read. Or, if you read another set of headlines, a dad violated the speaking time while protesting a book, continued to speak, and eventually had to be taken away and was charged with disorderly conduct. If you want to know which side a website is on this issue, just go to google and check out the headlines. It’s actually kind of hilarious.

I’ll start off with the fact that I’ve not read the book in question: 19 Minutes by Jodi Picoult, thus I’m not going to speak about the appropriateness of the book in question. (See what I did there, everyone… I didn’t know, so I didn’t pretend to know, and then force everyone to listen to my opinion!) The one, highlighted section seems pretty bad, but nothing worse than what I’ve seen on television today. The book itself, about bullying and a school shooting seems like a heavy topic, but one that is pretty relevant, so based on that, I’d like to say kids (and some adults) should check it out. But since I don’t know, I’m not going to advocate for it.

The problem is that people are getting behind this father because of his brave opposition in the face of a despotic school board that is forcing kids to read trash. My problem with this is that he wasn’t pulled away because of his protest. He was pulled away because he violated the speaking rules of the school board. He wanted people to know his opinion, and then essentially threw a temper tantrum when asked to stop speaking. My guess: had he lost out on time because someone else did the same thing in support of the book, we’d be reading different headlines.

This problem further gets compounded by the fact that now his daughter is stepping forward, and making this an issue of the teachers and the school, and saying how she can’t trust them.

It’s NOT AN ISSUE OF THE BOOK, WHICH THE SCHOOL BOARD ALLOWED HIM TO SPEAK ABOUT. It’s an issue of LISTENING AND RESPECTING THE RULES THAT EVERYONE ELSE HAD TO LISTEN TO. The hilarious part of this story is that the School board realized that in the 7 years since the book was used in schools, the teachers sent out letters informing parents this was being read. And then the school board agreed: yeah, they should have sent it out. This guy threw a temper tantrum for essentially nothing.

So, basically, what this father did was teach his daughter not to trust or respect teachers. Then, later, we’ll all sit and wonder why teachers can’t teach. He was willing to yell and scream and throw his hands up… while violating the rule that everyone before him followed out of courtesy so he had the chance to speak… and everyone focuses on this “brave crusader.” He’s not brave. He’s a coward who tried to bully his position into place, and thought nothing would happen to him. And then he taught his kid that people with different opinions aren’t worthy of your respect. And that’s so sad.

This was a disturbing trend I’ve noticed: Everyone has spent time in a classroom, so everyone thinks they know what and how to teach. I started this blog to chronicle my time learning to be a teacher. The key word here: LEARN. I had to spend extra time in classrooms, I had to spend time figuring out what I was going to teach, the right way to teach it, the right way to teach it FOR specific learners, and just how it’s all going to change tomorrow because someone who hasn’t spent time in a classroom since June of their senior year has decided they wanted it taught that way.

Nothing seems to be setting this off more than the dreaded… Common Core. Depending on your take on this, you read it in a scary voice, or you read it in a normal voice. Either way, keep going. A smart man once said, “you can’t please all of the people all of the time, but you sure can piss everyone off pretty quickly.”

It’s almost as if the planet doesn’t operate under strictly black or white rules, but a world where… I don’t know, if you do research and take a look around, things might be a little gray. Just a little.

Throw out the words “Common Core” and you either get told how you’re an idiot and questionable remarks made about whether or not your parents may or may not have been related before the marriage, (Like a Lannister, and Joffrey turned out… never mind…) or you get clapped on the back like a rising hero, just like Joffrey before… never mind on that, too.

The thing is, Common Core has some GREAT parts to it. And it has some SUCKY parts to it. And for some people, those sucky parts are great, and for others, the great parts are sucky. Confused let me ‘splain. No, this post is going on kind of long. Let me sum up.

The Common Core is a different way of teaching things that emphasizes understanding over memorization. So, for instance, someone like my brother who was always good at picking things up like math problems or equations, the Common Core is pretty terrible. He doesn’t need to have it explained to him why y fits into the x axis then z will make you travel back in time. My brother is smart, and probably could have built a time machine out of a Delorean by now if they were still readily available.

However, as the previous example shows, someone like me, who can understand something pretty easily but has a difficult time with memorizing, the Common Core is pretty great. Break it down for me. Allow me to understand it. Allow me to spend time figuring it out.

The problem is we’ve reached the point where everyone immediately likes or hates it, without understanding why it’s helpful to people. And those that hate it mock it constantly (don’t believe me? You don’t have a friend with kids in school on Facebook. Google that sucker and see all of the complaints.) And the thing is, when we say, “I HATE IT ALL AND THE WORLD SHOULD BURN” what we’re saying is “Hey, you who can’t understand it… the way your’e learning is wrong, and you should probably be beaten with a pool cue until you learn it the right way.” Ok, I’m exaggerating, but people really hate this to the point that I have seen people talk about how their kids won’t learn this crap, without understanding those moments where it’s really helpful.

**Quick note: They probably won’t. In about four years, someone else will take that work those professionals have worked on, condense from 500, loving, thoughtful pages to 5 lines of sound bites, and pass that off as the brand new way all schools ever will be saved. Trust me.

My point with both of these examples is that we’re taking power away from the people who actually do the teaching, and telling kids, “hey… don’t listen to those teachers that have spent time learning and exploring their craft. You don’t have to listen to those people who had extra time in school, had to pass tests, and are constantly being re-certified. No, listen to the guy screaming because he doesn’t like the fact that he has to adhere to the same two minute time rule as everyone else. Hey, listen to these guys who say it’s SO EASY… never mind you don’t understand it.”

We need to stop shutting down teachers. We need to stop acting as if teachers and people who work in a school are somehow exempt from basic human respect. Let’s take that father in New Hampshire. Let’s say I went to his place of business that was having a “complaint day” where everyone can air their problems with his company. Let’s say I’m so outraged over something, I demand to go over the allotted time I’ve been given - the same amount of time given to everyone else - and they have to escort me from the premises - how many supporters do I have? Probably not many.

I also love to eat. Let’s say I walk into a restaurant and start demanding things be done a certain way… my way, and only my way, for EVERYONE. How many supporters do I get? I’m going to guess probably not a whole lot.

It’s easy, actually, let teachers teach. Let’ teachers do what they need to do without complaining every five seconds about useless things. Let’s follow the rules of decorum. Let’s stop teaching our kids that teachers don’t matter.
Posted by Bad Shakespeare at 4:30 AM