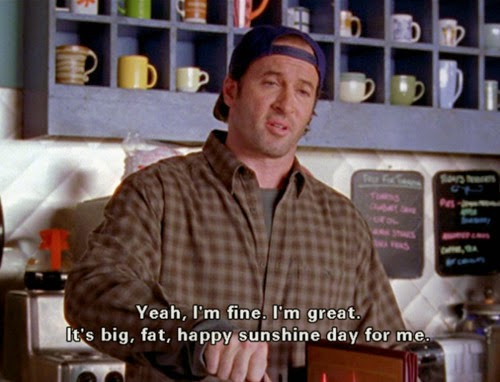 As many of you read (many more than anything else previously read on this blog)  I recently quit the internship for the job I’d been working towards for about three years and decided to go in a new direction. The feedback has been amazing. I’ve gotten everything from , “you go, girl” (which was meant in solidarity and not a comment on my encyclopedic knowledge on all things Gilmore Girls) to, “I didn’t know you were miserable, why didn’t you say anything sooner, to “you selfish bastard, what is wrong with you?” (the last one was in the minority, so it stings less.)

It felt good being able to share that story with everyone. And given that we are in Commencement Speaker-times... that being Graduation time... for most college students, I wondered what I would say to college students out there. Then I realized I had a blog, and three days a week to fill, and I was like... hey, I do have the ability to figure that out. So, if I were giving a commencement speech (provided the students didn’t decide to boycott me based on my pro-Gilmore Girls views), it would go something like this.

Ladies and Gentlemen of the Class of 2014... Congratulations. You’ve made it this far. For some of you, it’s the ending of what you might call the formal education years, where you sit in a classroom and learn a bunch of things that you may or may not use, and the start of the second phase of your education where you learn from life itself. The tests aren’t really graded, and if you want a smiley face sticker, you’ll have to go get one yourself.

For others, it’s the end of one leg of your education and the start of another, with post-graduate work. Those tests are graded, but you still have to by yourself your own smiley face stickers. I would recommend this, because it will cheer you up when you get a B plus on that paper you actually started early and not at the last minute.

Anyway, this is the time of life you start getting a lot of advice, from parents, former teachers and educators, and me, your humble commencement speaker. I was once like you, sitting at my commencement, wondering when it was going to be over, not realizing that the cool speeches and the robes I was wearing were important - because there was little chance I would ever wear them again, or listen to someone that didn’t have advice that was linked to a bad pun about the industry I was working in attached to it.

Given that you are expecting advice from me, I’m going to go ahead and start doling it out.

Be happy. That may be the most vague advice ever, but it’s the best I can give, and the easiest to ignore. Too often we get sucked into something because we want to make other people happy. The thing is, we can only do that so long before we end up as someone we don’t want to be. You know the old saying, “people don’t really change”? Yeah, that’s not true. The problem is that people often change for the worse, allowing themselves to get sucked into worlds and situations that make them miserable, then they become miserable people. And too often, miserable people aren’t happy until they spread that misery to other people. It’s like a virus.

How can you be happy? By recognizing when you’re not, and realizing you’re never too deep into something to change. I was in the second to last semester of a graduate program when I stood up and walked away because every morning I was wondering how I could “accidentally” slip on some ice and get to go to the hospital for the day instead of dealing with what I had to deal with. That’s misery, people. It’s never too late to change your mind for the better.

Empathy is not weakness. I just said to be happy at the expense of all others, but that doesn’t mean that you shouldn’t stop to think and care about what other people feel. We’re told too much to care only about ourselves, but we have to remember that what we do can affect other people.

In short, you don’t really have to be a jerk about things. Don’t want to be in a relationship? End it. Don’t like a job? Don’t badmouth people on the way out the door, find something and move on. Save your outrage and retaliation for moments that really deserve it.

Don’t waste your time stopping other people from being happy. No matter what you worship... God, Zeus, The Almighty Dollar, Nothing... at the end of your life you’re going to have to answer a very important question. How did I spend my time? If even one minute of that was spent stopping someone else’s happiness, then you have wasted too much time. Who cares if two people get married that you disagree with. Who cares if someone is reading a book or going to see a movie that you disapprove of. Who cares if someone’s idea of fun is to run around and have people throw color packets on them. Who cares if someone wants to only eat meat, or doesn’t want to eat meat.

Before you open your mouth, ask yourself if what they are doing is hurting anyone. And I don’t mean in a spiritual way that only applies to you and your beliefs. Are they holding a weapon to someone else? Is someone else being held against their will? No? Then ask yourself how you’d feel if someone was telling you that you couldn’t do something that, at the end of the day, wasn’t any of their business. You’d be pretty mad. Now imagine how they feel. Probably the same. There are real injustices in the world. Protest those. Not a book that has a naughty phrase in it. (unless it’s the book I’m writing. then protest it a lot. I want it on the front page of the news.)

Stop using the phrase, “Guilty Pleasure.” I enjoy Doctor Who almost too much, I could listen to musicals non-stop, I actually enjoy the adult pop-ballads of Russell Crowe (even if the lyrics are unbelievably cheesy at times... and a little fun to make fun of), I can name for you all of the different types of Lanterns in the Green Lantern series, and I’m an unabashed, die-hard, bring-back-a-movie-to-wrap-it-up-fan of Gilmore Girls. This doesn’t make me a bad person. It makes me a person who enjoys certain things. What do you enjoy?

If someone is afraid to tell you something, you’ve failed. I don’t care if you’re a parent, a boss, or a mid-level employee that gets fired by email. You should always be approachable. You should always make your views known, but let people know that they can talk to you about anything that’s on their mind. People should be able to talk to you about their failures, dreams, or something major without thinking your going to immediately jump on them. Now, what they did may have consequences.... but they need to know that those consequences are something justified, not you screaming or overreacting.

Lastly, don’t judge. I had a good friend who once said, “when you point a finger, you’ve got three fingers pointing back at yourself.” Truer words were never spoken. Especially today we’ve almost made a sport out of judging people, or trying to justify that judgement.

From all of this, I guess what’s most important is to live a life you’re proud of, and to live one where you don’t do any harm. Go out there. Enjoy yourself. And seriously, if you find yourself in a seat to make this happen, bring back the Gilmore Girls for one more episode.

Good luck, and Allons-y.
Posted by Bad Shakespeare at 4:30 AM