Fast and the Furious Week: Basically the Karate Kid, but with More Cars 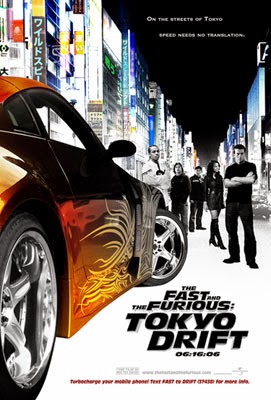 Now it’s time to talk about a movie where a young man moves to a foreign country, gets into some trouble with some bullies, and learns a secret move from a mystical Asian man.

This is the post about how Fast and the Furious: Tokyo Drift and Karate Kid are the same movie.

Times were dark as the franchise moved into its third episode. Brian O’Conner and his friend Rome had settled down to open a garage with stolen money.  Dominic was still running around in Mexico, living his life a quarter mile at a time, quiet for those 10 seconds. And the rest of the crew was wherever they were when we left them at the end of the first movie, because they wouldn’t be mentioned again. Plus, the almighty producers wanted to appeal to teenagers more, so they removed literally everything that acknowledged the previous two movies and set out on a new course. Except for one head nod at the end of the movie, of course.

In Fast and the Furious Tokyo Drift, Lucas Black plays Sean Boswell, a young man from Arizona who is into cars.  Naturally, he gets into a fight with Clay (played by Zachery Ty Bryan) and they settle it the way all 17 year olds solve their problems whenever this movie is supposed to take place (more on that in a minute): with a good old fashioned street race. The winner gets Clay’s girlfriend, who puts herself up for a prize in a classy display of feminism. Naturally both cars and a large section of a construction site are destroyed, because of Sean’s inability to drift into turns, and he gets sent to Japan to live with his father (despite winning, and without collecting on Clay’s girlfriend, presumably.) While there, he manages to get caught up in the world of Japanese street racing, and learns the ancient art of “drifting” while managing to piss off the Yakuza and the current Drift King, falls in love with the Drift King’s girlfriend, then gets challenged by Dominic in the head nod to remind everyone that hey, two movies came before this.

Oh, and there was a bit about some stolen money, but this Fast and the Furious was exceptionally light on heists, sadly.

As I mentioned in the first part this movie is essentially The Karate Kid, but with cars and without an illegal kick to the face. Sean has trouble in school, is seen as a rebel, gets involved in some shady stuff, and hast to turn to Han to learn the ancient art of “drifting.” At one point they even make a reference to the Karate Kid, letting him know that there isn’t any “wax on wax off” to learn the trade, but that’s where the differences really end. It is only by learning and training in the art of drifting that Sean is able to overcome his enemies and stay in Japan.  He messes up – twice – while learning to drift, and badly damages his car both times.  It is only by using his training that he is able to win the final race, when he needs to prove himself to his father, divorced from his mother,  and to gain the respect of the racing world. Han takes him under his wing regardless, and mentors the boy despite not knowing much about him. Seriously, I half expected Han to catch a fly with a pair of chopsticks at one point.

I mentioned yesterday that the second movie was the weakest, and I stand by it, but this is the most problematic in the sense that it is clearly wedged into the franchise to appeal younger. The first part of the movie is basically Fast and the Furious: The YA Edition as Lucas is still in High School, proud of his car, and has to take on the rich kids and his 80,000 dollar car, which we know because he proudly announces it. They come from a world of privilege  that Sean doesn’t know, because he has to keep moving around with all of the trouble he is causing. Once they destroy the construction site, along with Clay’s car, it is only Sean who gets into trouble because he is from the “wrong side of the tracks” once again continuing the theme of the incompetent police force in the face of the real trouble. It was Clay that threw a baseball, destroying part of Sean’s car, that started the argument to begin with.

It is when the movie gets to Japan that we begin to see the real reminders of a Fast and Furious movie, with expensive cars in flashy races, but it is a brand new style, one that is foreign to the audience as it is to Sean. While the original movies had a pretty clear goal: fast cars go towards a goal. This idea is first introduced as Sean is batted around the construction site, and then again when he enters his first race and manages to just mangle his car.

As a protagonist, Sean causes some trouble because of his age, he is under the thumb of his father, or at least his father tries to keep him under his thumb. While father issues aren’t new in these movies – remember the chase and the end of the first one involves fathers – but this de-aging of the main character means that the parental issues have to be dealt with in real time. It is by standing up for himself that he at least starts to reconcile his life.

However it is not until the final melding of his two sides – using his father’s car with Hans’ old engine – that we really get to the real theme of the movie, which is Sean’s inability to reconcile his true self. He is a young man who is at war with himself, trying to do the right thing while wanting to prove himself. We first see him conflicted in trying to help the young man being painted purple by the bullies, and only acts when he is threatened. Then he is contrasted with his older car to the newer car. We first see him in the plane to Japan contrasted with all of those around him, and he can’t even find the proper shoes when coming into the school. He is constantly trying to fight when he doesn’t want to. It is not until he finally accepts this melding, along with his training that he is able to accept himself for who he is.

As mentioned, this movie does come with a bit of a problem for the franchise, in that the events of this movie take place AFTER Four, Five, and Six, and the fallout being shown in the seventh. I am curious to see how the seventh will reconcile these characters, as Lucas Black is set to reprise his role. However, this is an interesting detour in the chronology of the franchise.


Tomorrow: We finally get to continue the epic bromance of our times; Brian and Dominic.
Posted by Bad Shakespeare at 10:04 AM

Email ThisBlogThis!Share to TwitterShare to FacebookShare to Pinterest
Labels: The Fast and the Furious