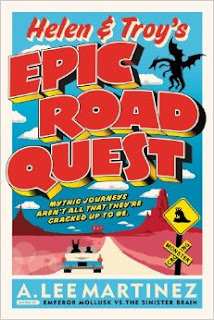 I’m a proud nerd, one who grew up with the old classic stories of Orcs, Goblins, and all sorts of fun things that are cool now, but really weren’t at one time. But that’s another post. Anyway, before the geek inherited the Earth, we all read these cool stories where a cool hero would undertake a quest, usually an epic one to save an old timey land and a king, along the way he’d pick up a few companions, maybe shoot off a one liner or so, and save the world with a wink and a smile.

But these all had one thing in common, they took place in the olden days of swords and dragons. What would happen to these worlds when time moves on (if it does… it’s up to the epic heroes to ensure that it does) and eventually things are in the modern age? How does a Minotaur use snapchat? What about Elves and what will they end up doing?

Fortunately, Helen and Troy’s Epic Road Quest by A. Lee Martinez is here to answer all those questions. Or at least post them in an more entertaining manner than I was able to do in a few sentences.

Helen and Troy is about… well, pretty much that. Helen and Troy, two friends who set out on an epic road quest to save the world. Or destroy it. They don’t know for much of the novel. Helen is a 19 year old Minotaur who works at a fast food restaurant with her friend, the exceedingly handsome Troy. He’s very, very handsome because it’s mentioned on every page. One day, Helen’s elf-manager attempts to sacrifice herself to his god, and ends up being sacrificed himself and curses both Helen and Troy to go out on an quest to find the ancient artifacts that will bring him back into this world. Reluctantly, the pair takes up this mission. They get added along the way by the very official Department of Questing, which would have been useful in some of those other books I read. They’re also pursued by a group of Orcs who formed a biker club, but weren’t really sure about what to do with it until they’re asked to stop the pair.

This book reminded me of all those old questing books I used to read. I mean that as a high compliment, actually. Despite the fact that it is sent in mostly present day, I enjoyed the throwback feel to it: the evil god appearing to two young questers, finding artifacts and needing them to move onto the next part of the quest, even the rules set forth by certain characters. It just all fit in with the book.

I also enjoyed the humor in this book, particularly when it came to some of the more modern uses for older things. When the old god is first summoned, he appears using ground beef in the fast food restaurant because that’s all there was. The Sisters of Fate now own a knick-knack store, and Future is always off behind a counter somewhere, just out of sight. Even little moments, like Helen talking about how difficult it was getting shirts over the horns in her head. Martinez always takes time out to show a little bit of humor.

However, some movements of this humor fell a little flat. For instance, Helen refers to herself as an “Enchanted American” and every time she did I just sort of cringed a little. Also, if one refers to herself as an Enchanted American, I would have liked to have seen more regular Americans and how they react to a world with magic. Troy is supposedly “normal” but the reactions to his infinite beauty led me to believe that we’d get some kind of revelation that he was actually enchanted in some way.

There’s also Helen, who very much dislikes herself because she is a minotaur. It’s explained early on that she’s one of the only of her kind to be so much of a minotaur, as it’s a gene that’s been passed down and she just happened to get it worse than her mother. But so much of the book is dedicated to how much she hates herself because she is so minotaur like, it can get kind of distracting. I understand that accepting yourself is part of the story, but her self-hatred goes up almost until the end, which I felt tok away from too much of the book.

Overall, it was an enjoyable book, one I would pick up again, (if a bag malfunction didn’t require me to leave it in Ireland… enjoy it, whoever will read it next!) but I wish there was more questing, and a lot less self-loathing.