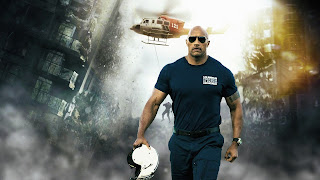 For some reason, I’m really fascinated with disaster movies. I don’t mean, “aliens come in and blow stuff up” or “giant dinosaurs rampaging through the planet” or even the movie Aloha. (Review coming soon!) I mean, “something bad has happened and it’s not like we can do anything about it.” It’s sort of like man vs. nature on the spectrum of movie plots, but I like to go further and even go beyond that, where there really isn’t any type of antagonist. Alec Baldwin and Anthony Hopkins fighting a bear is technically man vs. nature, but there’s an enemy in the bear. Sharks get sucked up into a tornado again, technically is a disaster (for many reasons) but people are still able to fight the sharks. However, put people against a raging inferno or an Earthquake, like in San Andreas, well, there’s less to fight, and it’s sort of “how can we survive.”

San Andreas is about… well, pretty much what the title implies. The San Andreas fault goes wonky. The Rock… I’m sorry, Dwayne Johnson (because advertising the movie as The Rock vs. THE ROCKING would have been stupid) is a badass rescue helicopter pilot named Ray. He’s going through a nasty divorce with his wife Emma (Carla Gugino)  dealing with his daughter, Blake ( Alexandra Daddario) is going off to college, and his wife is about to shack up with a rich dude that oozes evil from the first second we meet him. Because, well, we have to hate someone, and it’s difficult to hate tectonic plates for doing what they’ve been doing since well before a mosquito sucked the blood of a dinosaur and got trapped in amber, allowing for eventually Chris Pratt to tame Velociraptors. (review also coming.) Oh, and Paul Giamatti gracefully hands over the action parts to Dwayne Johnson and settles in for his role as guy who explains everything to the audience a Caltech scientist who can predict when Earthquakes are going to hit and periodically shows up to tell how things are going to get worse. Anyway, bad earthquakes hit, Blake is stuck in San Francisco with a hunky British Dude and his brother, and we know that San Francisco is going to get hit hard because Paul Giamatti keeps reminding us that it’s going to get hard. Ray hijacks a helicopter to go save her, presumably ignoring all of the other people that need rescuing along the way.

Where do I start? How about this: I liked how the movie focused on a smaller family, rather than trying to make Love, Actually: Earthquake Edition by having us focus on about 90 story lines at once. Also, by focusing on a family unit, it helps bring some actual emotion into the script as opposed to just waiting for the next CGI building to fall in an impressive manner. This also allows the movie to be more about a family than it does an Earthquake, which make sense as this presumably takes place in the real world as opposed to a world in which The Rock is going to raise his eyebrow, run across San Francisco, and lay the People’s Elbow down on those tectonic plates that are causing so much trouble.

Hey, he started as a Wrestler. I’m going to acknowledge that. There’s no reason to be ashamed of his past. He started with 8 bucks now he’s the richest movie star on the planet. Good for him. Just because he had to throw guys in tights against metal cages to get there is nothing to be ashamed of. The WWE is quality entertainment.

The Rock is likable as always, and I threw in the part about him ignoring people but it never comes up. Also, he doesn’t really ignore anyone, I just wondered why they never really talked about how an entire helicopter was missing, or how all of those people he worked with in the beginning of the movie and had a great friendship with never showed up or were really mentioned again. I would have liked to have seen them all fly out together, and work as a team, even if it was to save Blake from the evil Earthquake.

Ah, Blake’s story. Let’s get to that, shall we. She flies off early on with evil boyfriend dude (played by Ioan Gruffudd, in his most wasted role to date, and he played Mr. Fantastic in the Fantastic Four movies.) The writers add some pathos to her scenes by reminding us that she once had a sister who drowned while out white water rafting one day, raising the stakes for her to survive. But they’re bogged down because she’s almost immediately abandoned by evil boyfriend dude (I don’t even remember his name. As is sole job is to make us hate SOMEONE in a movie full of people that band together in the wake of a huge natural disaster, I don’t really care to look it up.) who then spends a good portion of the movie wandering around various scenes, upping his evil level by ensuring his survival until (spoilers) he’s unceremoniously killed by a falling container, never to be mentioned again.

Blake’s story actually isn’t very bad, as it ensures the survival of the guy that risks his life to save her despite meeting her exactly seven minutes before the earthquakes hit. And she does rise above the initial point of the character as a MacGuffin for The Rock and his ex-wife to go find and save, thus ensuring that they don’t have another daughter they have to bury.

Overall, movies like San Andreas are difficult for me to review. I didn’t love it, like Inside Out, Me, Earl, and the Dying Girl, The Avengers, or Spy. But I didn’t absolutely hate it, wanting to buy every copy of the film, burning them, then salting the Earth so nothing can grow in it’s place. It sits in that rare middling ground, one that movies enjoy before they go sit on FX all hours of the day.