Summer Movie Season: Inside Out 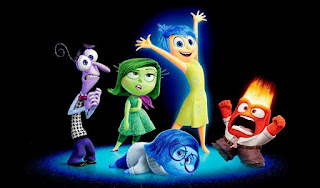 I’m curious as to what it’s like in the Pixar writing room. Sometimes, I wonder if they have a well thought out plan that carefully puts together each movie, or if it’s just done on a dare. “Hey, what if TOYS have feelings?” they say one day. Then they wonder about cars, and their inner feelings. Then the wonder if the Scottish have feelings. Until eventually, someone says, “Hey, screw it, let’s just do a movie about feelings.” And then they came up with Inside Out, a totally unique movie with a subject matter that wasn’t tackled in the 90’s with the sitcom Herman’s Head.

Inside Out tells the tale of Riley, who is held hostage by a tyrant named Joy who rules over her other emotions with an iron fist. As she keeps her rule by ensuring every moment of Riley’s life is a happy one, she relegates one of her other emotions, Sadness, off to a small corner of her mind. One day, Sadness and Joy get lost in the recesses of Riley’s Mind, just as Riley is moving to San Francisco. The pair have to team up with her old imaginary friend Bing Bong to eventually get back to HQ, where Joy learns a valuable lesson in the vein of every other Pixar movie, ever.

I’ve thrown in several jokes, but this really was one of Pixar’s best movies, if not one of it’s darkest to date.

Let’s start with Joy. She’s played with all of the exuberance one comes to expect from Amy Poehler, but in terms of Pixar heroes she’s one of the most unlikeable and darkest. (That has zero to do with Ms. Poehler, who could probably voice Darth Vader in such a way that we’d all start rooting for him.) She’s written to be a control freak, someone who doesn’t want Riley to ever experience sadness, and takes away from her really experiencing life. It works towards Riley’s detriment, and the movie is not afraid to really show how Joy’s constant meddling make things that much more difficult for Riley, who can’t cope when Joy isn’t around. Yes, she becomes much more bearable by the time the credits roll, but as she constantly shoves Sadness around, it’s difficult to feel sympathy for her. Which is the point, I get it. I just can’t remember a Pixar hero that needed to learn their lesson so deeply that they were so unlikeable for most of the movie with the exception of maybe Woody at the start of the Toy Story, but even then he quickly realized his mistake and moved on. (and was forcibly removed, but still.) But most of the time I was rooting for Sadness more than I was rooting for Joy.

Sadness, played by Phyllis Smith, best known for her role as… well, Phyllis on the Office, (They weren’t too creative with their names on that show…) brings out not only the sadness of Sadness, but the character who is trying to do her job. There’s one scene in particular where Sadness is talking to Bing Bong, helping him through an existential crisis of being an imaginary friend. She has the harder task of most of the cast, having to justify the existence of Sadness in a world where we want to be happy all the time. But the way she interacts with Bing Bong really helps to bring the idea that we all need to be sad some time. She brings a level of compassion to the scene that’s difficult to really express from any other actor. While Amy Poehler and Joy are going to be getting a lot of press, I really hope that come award time, they talk about Phyllis and her role as Sadness and her ability to bring a level of gravity to the role.

There’s the rest of the cast, too such as Richard Kind as imaginary friend Bing Bong, Bill Hader as Fear, Mindy Kaling as Disgust, and Lewis Black as Anger who all bring their respective feelings to life in a wonderfully imaginative way. I imagine the talk for Pixar Casting was to find someone Lewis Black-like for Anger, only to be followed with “let’s just get Lewis Black.” He kind of steals the show once Sadness and Joy are lost in the recesses of Riley’s mind.

I mentioned the darkness of the movie earlier. It is a little darker in that it moves away from the idea that all things are black and white. Joy is “good” while Sadness is “bad”. Too often we get lost in the idea that we have to be one way or the other, but Riley is really thrown off when she’s forced to confront her other emotions. It’s not until the emotions learn to work together, and she realizes that she doesn’t have to be “happy” all the time or “sad” is a bad thing. She’s allowed to miss the home that she moved from, she doesn’t have to simply accept that everything is all right. I just like the idea that we are all allowed to have our emotions, and sometimes even the “negative” ones can lead to positive results, if we allow ourselves to feel them and not try to suppress them. Like the sheer tears of joy that I swear I wasn’t crying at the end of this one.

I normally try to find something negative with a movie to talk about. Like I said, other than dealing with the fact that I didn’t like Joy for a large section of this movie (and maybe that’s a talent in and of itself… I hated happiness… how can you manage to do that?) there’s not much to hate about this.

Quick note: like all great Pixar films, this does run with an animated short called Lava, which is about two volcanoes that fall in love through a song that’s based mostly on a pun. Yeah… it’s pretty awesome. I really feel that Pixar is just daring itself now. If we can get a rat that wants to be a chef and a bunch of ants that play Three Amigos, sure…. let’s have two volcanoes fall in love over hundreds of years. 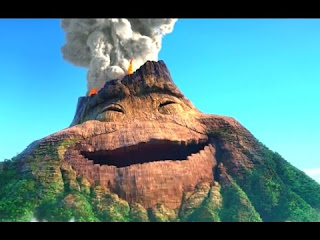 Posted by Bad Shakespeare at 8:01 PM

Email ThisBlogThis!Share to TwitterShare to FacebookShare to Pinterest
Labels: Inside Out, Pixar, Summer movie season