Saying that Teachers Should Be Valued Shouldn't Be This Controversial 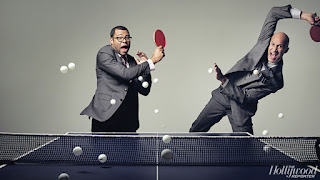 Recently, Key and Peele took on an extremely controversial topic. If you’re not familiar who Key and Peele are, they’re a pair of comedians that have a pretty funny sketch show on Comedy Central. One of their recurring sketches is an “Anger Translator” for President Obama. That one can get controversial, I guess, if you don’t like President Obama. Or anger, I guess. But no, they tackled another subject... Teachers.

In a recent episode, they showed what the world would be like if we valued... you know, teachers instead of athletes. It was complete with Teacher Center, set up exactly like Sports Center, complete with a Teacher draft and a car commercial at the end where a teacher was doing the driving (and took a bite of an apple... nice touch.) They were paid millions of dollars for their teaching ability. Plays were shown where they showed teachers getting involved.

In short, it was a pretty good sketch. I know it’s been shared. Then I made a cardinal mistake of the internet. I looked at the comments.

Yes, I know that I shouldn’t look at the comments of just about anything. But I was curious to see what people were saying about this sketch. Listen, I’m also very aware that the internet, because of it’s anonymous nature people are crueler than they need to be, because nothing makes you braver than zero consequences.

But I was surprised at the sheer amount of vitriolic comments being lobbed at teachers. They were nothing that I hadn’t seen before...

“Teachers get three months off!”
“I thought that teachers said that parents were supposed to be important! Why aren’t we saying the same about parents!”
“Teachers are lazy!”
“They just teach to the test!”
“Football players have talent!”

I don’t know why it got to me so much this time, but it did, and I posted something about it on my personal Facebook page. Then I realized I had a blog, and I have my own forum to post these things. Plus I went through the teaching program, so I have a better insight than some guy who finds the time to post their hatred for teachers on a video shown by a pair of comedians. (Who are talented in their own way. And as of this video, smarter than many of the people who commented on it.)

Let’s start with my favorite myth: The myth of the three months off. I know this is the go-to on the “lazy teacher” crowd. What they don’t realize is that is a majority of teachers don’t, in fact, get three months off. Some of that is spent keeping up with the constantly changing requirements to maintain a teaching license. A majority of it is spent planning for the new year, once again changing plans based on random changes that are being made. (More on that in a minute.) And who do you think teaches Summer School? You know that school that is filled with kids that don’t want to learn? Yeah. Lazy. (That was sarcasm. Ask a teacher what that means.)

The problem is that we no longer value education anymore. We have politicians running for President on a platform of dismantling education rather than helping it. Not fringe candidates, either, actual, “hey put me on TV” candidates. Not the people claiming to be Jesus reincarnated or who are running their candidacy out of their parents’ basements. We have changes to school textbooks not suggested by actual scholars, but by people with agendas... and it’s being accepted. There are entire states that make teaching the least appealing job in the world, then wonder why there’s a shortage. (Thanks, Kansas!) It’s fun to scream about standardized tests or Common Core for some people, but did anyone stop to think about why this is a big deal? Is it because a bunch of people got into a room and said “we need to do this” without stepping into a classroom. (The answer is yes. I’m high on the rage and sarcasm today.)

In this country, we no longer value the ability to be smart or rationalize. And the people being demonized by this are the teachers.

I won’t argue that all teachers are perfect. In fact, the opposite. We do have a lot of bad teachers, because the teaching profession isn’t designed to accept the best and the brightest. I don’t talk a lot about my personal experiences with why I quit the teaching field. But maybe it’s time that I should.

When I first got into the classroom, I wasn’t filled with the delusion that I would change every life. And see, that’s the problem right there. I went in, already cynical from what I’d observed. And the problem is, no one wants to counter that. There’s a defeatist attitude that comes in a little bit with teaching. A sense that there are some things you can’t change... and mostly because teachers lack the support of parents and administrators. It’s tough to blame the administrators who are under severe pressure from a lot of different places. But parents? Not supporting teachers? Seriously? We’ve reached that point, and that’s sad.

I have more, but like I said, that’s my personal experience. Not everyone had this experience, I’m sure. And I will say that most of the people I’ve kept in touch with from my teaching program have made amazing teachers. Probably a result of us knowing Zenkov, a professor who made sure we were amazing teachers. But at the end of the day, I can tell you that not everyone I was in class with was going to be a good teacher. A lot for these reasons. Some for others. I don’t know I’m ready to go into that part fully. Let’s keep this post’s focus on teachers, and how we need to encourage them to do their best.

So, two comedians put out sketch where they decided we should all try valuing teachers. The thing is, I don’t know how we can disagree with them. Yeah, it’s cool that some guy can throw a ball really far. I love football. It’s fun, but when we get to the Coca-Cola Half Time Report Presented by Taco Bell’s Pepsi Half Hour... maybe our focus can be going elsewhere. Maybe our focus does need to be on this profession that is attempting to make another generation smarter than the last. The Cowboys lost last week. That’s a great distraction. But it doesn’t really tell me anything about the classics, how to analyze a math problem, or encourages me to go out and find a new discovery.

Teaching is already one of the toughest things in the world. I know. Because I couldn’t do it. We already send them in with as little resources as possible while making them jump through impossible hoops while they’re being badmouthed by Politicians and Parents. Its like sending a solider into battle with half a gun and telling them they they have no support from anyone else. How can we allow that, in good conscience?

Let’s let not just let teachers teach. Let’s support their efforts. Let’s not actively attempt to discourage them from making this next generation smarter, from letting them grow. Let’s remember that we need teachers to make the world a better place.
Posted by Bad Shakespeare at 6:00 AM