Summer Movie Season: It's No Rocky... 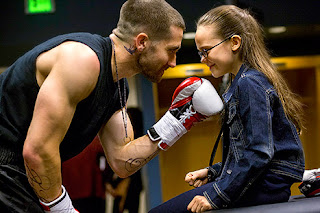 Is there any other sport that has been built for the screen better than boxing? Maybe Baseball. And Football. And let’s not forget Space-Basketball, best encapsulated by the wonderful documentary, Space Jam. I guess the bottom line is that sports can make good movies. But Boxing seems to stand tall among them. Perhaps it’s the storytelling involved with a good boxing match. Maybe it’s all our conditioning from the various Rocky movies. (There’s another one coming out this Fall, starring the same guy that played the Human Torch. Presumably he won’t be on fire, nor will he be in a horrible movie.)

Such is the case with Southpaw, the latest boxing drama to tell the story of downfall and then eventually, redemption.

Oh, and if you’re worried that this is a spoiler “there will be redemption” let’s be real for a few minutes. It has redemption. You know there’s going to be redemption from the trailers. Even the “sad ending” movies feature redemption, or lessons about going the distance. Let’s be reasonable.

The movie is about Billy Hope (played by Jake Gyllenhaal, who at this point really might be a shapeshifter. Seriously. Look at the way he melds into each role, including this one) who is on top of his game. He’s the Light Heavyweight Champion, he’s got a beautiful wife (Rachel McAdams), a daughter (Oona Laurence, asked to carry a lot of the movie), a mansion, a bunch of hangers on... He’s got it all. Naturally, he has to fall, because there’s only so much time that can be spent in a movie where someone has it all. Even Tony Stark is kind of insufferable until he loses his heart. Although in that case it’s sort of literal. But you know what I mean.

During a charity event, he’s challenged by an up and coming plot device jerk who stirs things up during a charity event, because why not? Don’t worry, Miguel “Magic” Escobar won’t pop up again until things are needed narratively. During the fight, though, Hope’s wife is killed. Not really a spoiler as it was mentioned in the trailers, and not really a spoiler so much as “part of the plot.” This leads Hope to depression, alcoholism, suspension from boxing, and the loss of literally everything including his daughter who is not only in the foster care system, but growing emotionally distant from him as well.

The problem with Southpaw is what I just managed to write there... that’s the setup. We’re show all of this in glorious detail, learning all about how Hope has a wonderful life that’s taken away, and if you forget it, the movie hammers in it during several scenes that pretty much could be part of the backstory. The far more interesting part is watching Billy get back on his feet again: learning to be an adult, working at the old gym under Titus Wills (Forest Whitaker) who should have entered holding a cane wearing a robe and speaking like Fozzie Bear, because he’s very obviously the Yoda character. But by the time we get to these scenes we’ve already witnessed a lot of Hope’s self destruction. He’s stopped caring (in fact it’s only when he loses his daughter than he starts caring) but it’s difficult to really care about this character.

The redemption is what gets the short end of the stick, with Hope obviously rejecting the offer to clean up the gym - he has his pride - but crawling back when he doesn’t have a choice. This is the in the span of a few minutes, where we’ve just witnessed an hour in of Hope’s destruction in excruciating detail. It sort of makes you wonder what the movie is trying to be about: Hope’s redemption or Hope’s suffering?

And that’s a shame, because the second half of this movie, the one that focuses on him as he rises up from working in a tiny gym and fighting in charity fights back to competing for the championship, is really interesting. But we’re relegated to just a few shots of him training, bonding with the teenager that will die and motivate him, and eventually we are literally back where we start - Hope boxing in the big time, narrative built around the man who was involved in the altercation that resulted in the death of a woman but didn’t really suffer for it at all.

The actors are really the good sell with this movie, particularly Gyllenhaal and McAdams, who are pretty convincing as a husband and wife who have known each other most of their lives. Even 50 Cent shows up as Hope’s manager, a sleazy character that probably needs just a little more screen time to develop as someone who is riding the Hope train long enough. Really i could have used more of 50 Cent, as he holds together a lot of the narrative theme of the movie, particularly helping Hope overcome his suspension by doing what he does, capitalizing.

Overall, not a bad movie by any means. Just one that doesn’t live up to the potential set up in it’s second half.

Seven out of Ten
Posted by Bad Shakespeare at 2:42 PM