Summer Movie Season: Pixels Wasn't As Bad As I Thought It Would Be 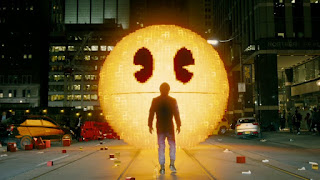 There was once a time when it wasn’t cool to be a nerd. Hot Topic is getting a lot of milage out of their Zelda or obscure Marvel Superhero T-Shirts, but when I was growing up it was difficult to wear your Star Trek T-Shirt out in the real world. Never mind about the debate who was better: Kirk or Picard (It was Sisko.) But through it all there was one thing that we always hoped:

The Geek would inherit the Earth. (No, I’m not clever enough to have thought of that on my own. The saying was old.)

That’s the topic of a lot of video game movies since Matthew Broderick boyishly taught a computer to play Tic Tac Toe to save the world in War Games. Or when a young gamer was called in to fly a starfighter in The Last Starfighter. Or when Fry did it in an episode of Futurama that suspiciously matches the plot of this movie. And let’s not forget that this is the plot of literally both of Ernest Cline’s novels Armada and Ready Player One.

Pixels continues the tradition of the gamer nerd saving the world, with a heavy dose of nostalgia to bring in the old people. Like me.

Adam Sandler IS Brenner, a once promising video game player who came in second in a world wide video game tournament and burned out, now installing televisions and home theatre equipment in a thinly veiled “Geek Squad” costume. Those orange shorts getting annoying after a while. Kevin James IS Cooper, the President of the United States and best friend to Brennan.

After installing a home theatre and temporarily bonding with Violet (Michelle Monaghan), a divorced mother who won’t kiss Brenner because she’s a “snob” (it’s important to remember that this movie has all the gender politics of an Adam Sandler movie.) Brenner is called to the White House to give his opinion on the recent destruction of a military base. Eventually Brenner teams up with Ludlow, a boy genius video game player who determines that it’s aliens bringing to life all of the old video games and are threatening the world. They eventually get Eddie, another gamer who had beaten Brenner all those years ago out of prison, and together, they team up to stop the aliens using their knowledge of video games. Not the new school call of duty games, but the old school type.

Let’s get tis out of the way immediately: This is a very stupid movie that’s pretty much designed to appeal not to Adam Sandler’s current audience, but his past audience, like me. The people that remember when video games meant gathering as many quarters as you possibly could and heading to the arcade, where it would be noisy, but you’d hang out with your friends for a couple of hours. The movie covers this in the obligatory nine scenes where Adam Sandler’s character says as much to Violet’s kid. And he’ll reiterate it a few other times, so don’t worry if you miss it.

But to be honest with you, for all the faults... I kind of really enjoyed this movie. It was a nice surprise. Despite the big budget and the giant centipede heads trying to destroy the city it’s just that: It’s a hangout movie with bigger stakes.

The aliens never really get defined, and they really don’t need to. They just exist pretty much to be a way for us to see Pac Man chomping on the streets of New York as a bunch of mini-coopers chase him around. And it’s an interesting dynamic, actually, since this reverses everything we’ve seen so far in this scene where they guys aren’t playing “Pac-Man” they’re playing as the evil ghosts.

This is a really good movie as long as you don’t delve too deeply into it.

So now, I’m going to delve too deeply into it!

It’s not without it’s problems. First is the relationship between Brenner and Violet. It’s actually paced out well, with them not liking each other and then eventually accepting each other. That’s not the problem. Part of the problem is that it is based around Adam Sandler telling her that she doesn’t like nerds, and not necessarily the fact that the first time he tries to kiss her she’s drunk in a closet crying about her ex-husband. He actually gets charming when he treats her like she’s a real person with real problems, but the first part is kind of... icky is the only word for it.

Then there’s the NERDS GOOD message that is throughout the movie. Yes, it’s cool that nerds are able to save the day with their mad video gaming skillz. That’s always a delight to see. But does it have to be said so many times? Does the army have to be THAT incompetent or bloodthirsty? Do they really need to break Peter Dinkledge’s character out of prison to play a video game when really, there were a lot of people that could come close to what he did. Also, the whole “We need video game people to win” trope falls a little flat around the time the aliens are really attacking, and it would be nice to have the WWE Superstar to be able to jump those barrels or to attack the actual menace.

Overall, though, it was kind of a fun movie. A lot more fun than I expected when I walked through the doors.