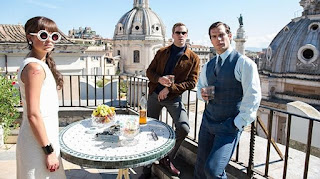 The spy genre has had an interesting year. The most compelling spy so far has been Colin Firth in the excellent Kingsman: The Secret Service which expertly dissected the spy movie genre. Melissa McCarthy played her Jason Statham-iest role yet in the aptly named Spy which wasn’t quite the dissection but more of a straight “what if Melissa McCarthy was Jason Statham” type comedy. And the world is once again gearing up for James Bond to go darker in SPECTRE, starring the gloomiest of Bonds since Roger Moore put on that clown makeup. Now, we have a reboot of an old T.V. Franchise is The Man From U.N.C.L.E, a spy movie that was directed by an extremely restrained Guy Ritchie.

U.N.C.L.E stars once and future Superman Henry Cavill as Napoleon Solo, which is totally a name. He’s a con artist who was arrested for being a the world’s best con artist, and since it’s a movie based on a T.V. Show he is pressured into becoming the world’s best CIA Agent, because that’s totally a thing that happens in movies. In 1963, he has to team up with KGB Agent Illya Kuryakin, played by Arnie Hammer to help stop Nazis or an evil heiress that slightly looked like Paris Hilton or something from getting some nuclear launch capabilities. To be honest, the plot is pretty straight forward. Bad guys want X. Mismatched good guys want to stop bad guys from getting X. Can they ever pull together to stop it? Along the way they pick up Gaby Teller (Alicia Vikander) who’s father is building the secret Nazi Bomb and who’s Uncle (I see what they did there) knows where they are.

Let’s start with the good, because there’s a lot of good in this movie. First, Guy Ritchie, as much as I’ve enjoyed his other films like Lock, Stock, and Two Smoking Barrels, and Snatch, pulls back from his usual frenetic style while not compromising on his vision. Yes, it’s great that one of his movies is in English but requires subtitles to understand, but this is not that movie. there are still some great cuts, and especially later in the film when Gaby, Solo, and Kuryakin are all trying to deal with their various shifting loyalties, he is quick to move to a flashback or a to re-show a scene that adds something new. For instance, Solo, needing an invitation to the swanky party thrown by the sexy bad guy, steals it from Hugh Grant’s character. It’s a quick scene, shot conventionally like we’ve seen a million times before: guy runs into character and magically, through the power of pickpocketing, manages to grab his ticket. Later, Hugh Grant, who we learn is an agent in his own right, tells the story of running into Solo, and the shot is shown again this time a little less slick and with it being very clear that Solo grabbed invitation, even waving it around at some point. The movie is full of little details like that.

I should also point out that there’s one very funny scene in which the action is taking place while Solo, who was thrown from a boat, sits quietly on the sideline. Rather focusing on the boat chase we’ve seen a million times, it focuses on Solo’s internal struggle on whether or not to help the man he has been ordered to help, so long as it’s useful.

This movie is also very much set in 1963, which is a bold choice. When the Man from U.N.C.L.E aired on television, it wasn’t far removed from it’s 1963 timeframe, and the Cold War was still heavily on people’s mind. This is unapologetically set during 1963, not bother to update, which is important. It would be easy to update it, have these two characters going up against the War on Terror or something, removing the Cold War tension and slow burn in favor of updating the latest slick gadget. But this helps add to the tension and just in general helps to make a better film. Nothing seems forced, it all works together to tell a smooth film.

The actors take to their roles very well. Cavill seems more at home in his three piece button up suit than he does his Superman suit (although he did fine in that, too.) Arnie Hammer portrays a very conflicted hero, one that is doing his duty to his family more than his country, who may at any time explode. A lot of the heavy living is done Vikander who must appear to be an outsider while (spoiler) seeming to know a lot more than any other character.

Now for the bad…

Did you get that? Yeah, this was an excellent movie. It was probably one of the best of the summer. (I’d say “the best” but I haven’t seen all of them yet, but I don’t have high hopes for a Jason Statham-less Transporter.) I really didn’t have a lot of fault with it. This was just a “cool” movie. Slickly done. Not really overly focused on the action, moments of comedy to lighten up otherwise dramatic scenes. Try watching the scene where Solo and Kuryakin trade the bugs they keep finding in each other’s rooms and not have a smile on your face.

Honestly, if I hadn’t seen this as one of the final movies that was being shown that night, I probably would have walked right back in and watched it again.

Go. See this movie. You will not be sorry.

I’m happy to award this movie my second 10 out of 10 for the summer movie season.
Posted by Bad Shakespeare at 6:00 AM