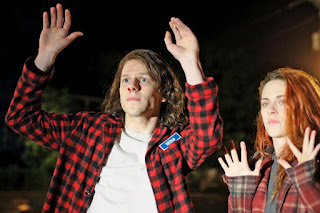 I don’t know that we would all like to be super-spies. It sounds like a dreadfully stressful job. The world is constantly in need of saving, right after you’ve saved it again. You’re always being betrayed. I mean, in reality I’d think that Ethan Hunt in the Mission Impossible movies would realistically be sitting in his shower screaming “why” the next time he’s betrayed and IMF is shut down. But we’re fascinated by it. And we seem to be fascinated with the idea that spy training becomes so implanted in people that it just takes a simple flip of the switch to turn them into killing machines, even if they somehow lose their memories. The most famous of this is the Bourne Series, which turned Matt Damon into a super spy who didn’t remember this name, but remembered exactly where to punch a guy to make his head explode.

American Ultra plays with this idea and adds a dash of The Big Lebowski and Pineapple Express, because we could use more of both of those movies.

Jesse Eisenberg is Mike Howell, a stoner living in a tiny town in West Virginia. He spends most of his days smoking pot, hanging out with his girlfriend Phoebe, (Kristen Stewart) and suffering crippling panic attacks whenever he tries to leave the city. Little does he know that he’s a secret agent, part of a program that was designed to create a super-soldier for reasons that are never explained or expanded upon. The program failed. For reasons that are never explained or expanded on. Littlier does he know that he’s been targeted to be killed by CIA Agent/Professional Jerk Yates (Professional jerk actor Topher Grace), who started another program to create super soldiers, because you can never have enough super soliders, I guess, and he’s activated by his original handler Lassiter (Connie Britton, looking like she’s unsure of what kind of movie she’s signed on for.) Obviously, hijinks ensue. Deadly, deadly hijinks.

Now, this sounds like a funny premise for a movie. Stoner slacker finds out that he’s a super-spy and has to save whatever. The problem is that the movie itself is unsure of what to do with it’s presence. (Spoilers to follow.)

The movie wastes little time not just setting up its premise, but by also letting us know that there’s an internal war in the CIA between Yates and Lassiter. These are some of the first scenes we see. In fact, our opening shot is Mike sitting in a holding cell, having just finished the events of the movie, and we flash back to what happens. Immediately it destroys any sense of comedy or mystery because it says: he’s been trained as a spy!

That’s not to mention the whole Yates/Lassiter war, which, like I said, is established in the first few minutes of the movie. But the problem is that rather than focusing on why these two characters hate each other, we just kind of get that they do. I mean, it’s kind of obvious why anyone would dislike Grace’s Yates, an obnoxious bootlicker who will murder anyone - including a harmless slacker in West Virginia) - to get ahead. It’s also unclear as to why there was even ever a second killer spy program, as we only got that Howell’s training had gone badly and he was the only one to survive, but it was killing him as well.

It’s frustrating. I think that’s the best word for it.

Then there’s Mike Howell, who should be the focus of the movie. He spends a lot of time not really being the focus of his own movie, with a lot of stuff happening around him and he having to reacting. This works when it’s done well, like the Big Lebowski. The protagonist in that movie is very much reacting to the world around him, a world that increasingly has nothing to do with him. However, Mike seems to be vacationing in his own movie until the time comes that he has to act to save his girlfriend.

And yes, his girlfriend. The big twist, hinted at pretty early on in the movie, is that Phoebe is… a spy. She’s actually Mike’s handler, who fell in love with Mike, and took him to West Virginia. Yates makes a comment about how she disappeared, despite the fact that literally everyone knows where Mike is. That’s the point of the movie. Everyone is going in to kill Mike. For reasons. And she does take action, eventually. But the whole point is almost tacked on as if they were halfway through the movie and someone noticed that she had been around way too long to not know something was up with Mike’s super-killer moves.

The real problem with this movie is that no one really knows what type of movie it is trying to be. It tries it’s hand at being a lot of things… an irreverent movie, a comedy, a serious drama… and it just doesn't work. Too much time is spent setting up a comedic moment for it to quickly turn dark. It’s difficult to laugh at the cover story for why the military is mobilizing in this tiny town - Lassiter has had sex with a monkey and unleashed a virus - when the Sheriff is shot in cold blood.

The problem is that it’s not an overtly bad movie, because it is at least trying to do these things even if it fails. And it adds a level of darkness to the movie that doesn’t need to exist. Suddenly the slacker isn’t smoking pot to get high, he’s smoking to forget his horrible, horrible, past. Yates is dispatched in an execution type manner in the rain that shows up for one scene. Those crippling panic attacks were programmed into him so he wouldn’t leave town. It just becomes way too dark.

It doesn’t try to sleepwalk through the plot like SOME horrible movies. (I’m looking at you, Fantastic Four.) The problem is in trying to do something new, it ends up doing anything exciting at all. It just sort of is.

Six out of Ten
Posted by Bad Shakespeare at 5:00 AM