In Space, No One Can Hear Me Curl Up Into A Ball and Sob 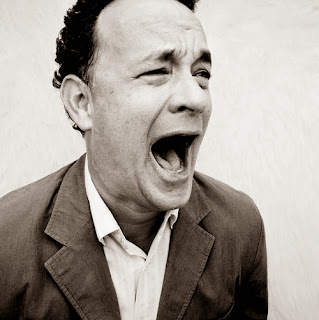 Tom Hanks be praised... we have had a fruitful Prestige Season thus far.  I just got back from Prisoners and I honestly believe that it will be quite the tossup for the High Movie Council to decide if they’re nominating Hugh Jackman for this or The Wolverine. (Het gets angry in both, but in one he has metal claws. I’d like to think the metal claws will push him over the edge a little...) And it only appears to be getting better and better as the weeks come towards us.

Of course, with Prestige Season comes the movies you HAVE to see. By the movies you HAVE to see, I means these are the ones that people will go check out, then get in your face and QUESTION YOUR VERY EXISTENCE IF YOU DARE NOT SEE THEM. We recently had one of these pop up. No. Not Machete Kills, that hasn’t been unleashed on the populace, not quite yet. (But promises to be awesome) No, I’m speaking of the George Clooney-iest Space Epic since Solaris, Gravity. For those of you who don’t know, it’s about Sandra Bullock and George Clooney getting stranded in space. People call it Science Fiction, despite the fact that they don’t really have anything that advanced, there are no aliens, and it’s mostly them floating around space for a couple hours. I haven’t seen it. And I probably won’t.

Neil deGrasse Tyson has already made headlines by pointing out all of the scientific inaccuracies in it, thus making it the first movie ever to not be scientifically accurate. But since it makes him mad, you’d think I’d be all over it.

All joking aside, I really refuse to see this movie. I have an irrational fear of dying in space.

Look, I realize that the chances are greater of me walking outside the house, being attacked by four sharks while being struck by lighting conjured up by Voldemort while a team of Scarlett Johansson clones do cheerleading routines while an audience watches than me dying in space. That’s why:

Now give me a moment to see if I can perfect my Scarlett Johansson cloning machine. Still no.

Anyway, back to the matter at hand. My philosophy has always been this: No matter how bad things get on Earth, I can at least make an attempt to escape whatever happens. House on fire? I can try to get out. On a sinking ship? I can try to swim to shore. Being attacked by a bearshark? I can punch it in the nose and run away. Cloverfield Monster Attack? I can build a giant robot and fight it. Scarlett Johansson clones coming after me? Actually I don’t know that I’d try to escape that one... Now keep in mind here I’m not saying “I will survive all of this”. I’m saying that I can try. Make the attempt. If something went wrong in space, what am I going to do? Head for the moon? Take my chances that if I head towards the earth and survive not burning up in re-entry that I’m headed towards the Acme Pillow and Marshmallow Factory?

Of course, you tell this to people and suddenly, they treat you as if you’ve done a terrible thing like steal Scarlett Johansson’s DNA and started cloning her for your own amusement. Or something similarly bad. Suddenly, this combined with your encyclopedic knowledge of all things Nicolas Cage makes you, “not a real movie fan, because this is the greatest movie ever and what is wrong with you?” Of course, anyone else can refuse a “bad” movie because it stars someone they disagree with, or because they’re not interested. I avoid a good movie, and suddenly it’s a case for my inclusion in the Movie Lovers Forever Club, I guess.

I’m sure that Gravity is a fantastic movie. I’ve heard the cinematography is amazing. I hear the acting is pretty good, but I’d expect no less from the man that destroyed a Batman franchise and the star of two Miss Congenialities. (I do like the actors, just throwing out bad movies out there... maybe ones movie snobs wouldn’t want to see...) I just have no desire to see it. It’s for a silly reason, I realize that. But how is that any less valid than not wanting to see Saw because it has a ton of blood, Machete because you don’t enjoy that type of humor, or Grown-Ups because of it has a ton of Adam Sandler? It’s just a movie I don’t wish to see. Because the thought of being in that situation terrifies me.

Besides, I hear from Neil deGrasse Tyson that it’s got some serious scientific inaccuracies.
Posted by Bad Shakespeare at 8:23 AM