This is the Story of a Blogger that Wanted to be More of a Writer... 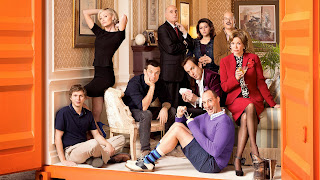 the time of this post, it is October 1st. Normally I do them a week in advance, but I was all thrown off by wanting to get my Breaking Bad finale analysis up in a fair amount of time. We may discuss it more in the future, but at this point I think it’s time to just let Breaking Bad rest and marinate with it’s audience. I stand on my statement that it’s like fine Shakespeare... extremely satisfying to see the bad guys end up in chalk (thanks for the phrasing, Thug Notes!) a little difficult to think about the destruction that reigned down, but right now I need time to think about it more. I plan on writing up a lot more about it down the road, when I have time to really watch it as a whole story.

Here’s the thing about Breaking Bad... it inspires me. Not to get a porkpie hat and start cooking up an illegal drug (ok... maybe the porkpie hat. I think that would make me look too awesome.) but to write. I also feel that way about Arrested Development. Both are finely crafted shows about people who’s behavior is kind of despicable. Both focus on the importance of family. Both use foreshadowing, flashbacks, and symbolism to tell it’s tale. Both feature a bald man who’s intentions are very ambiguous... but that’s all besides the point, this is a post about inspiration and doing something with it, not how Breaking Bad is like Arrested Development, only one goes the comedy route, the other dark tragedy, much like A Midsummer Night’s Dream is a parody of a Shakespearean play, down to including a funny version of Romeo and Juliet at the end, then having one of the main characters directly address the audience.

As you can probably tell from this blog, I enjoy writing. I enjoy coming up with little worlds. I made a promise to myself at the start of the year, this would be the year that I finish a novel. As some long time readers may recall, last year, I attempted to take part in NANOWRIMO... the way the hip kids talk about National Novel Writing Month. Unfortunately, my plans got derailed at the start of the month because sometimes plans get derailed it happens. But I thought about it, and I really regret not finishing what I started.

So, this is to announce that in one month, Bad Shakespeare is going to go dark with zero new posts about the topics I love: Teaching, Education, Science Fiction, Literature, New Books, Breaking Bad, Arrested Development (I’m really going to have to write up that post now)... no new posts. If you recall last year the plan was to report at the end of each month the progress made and what I where I was going, while posting bits and pieces. Of it. I won’t be doing that this year.

This year, I’m going to be posting my 1500 words a day live, to Bad Shakespeare, as I write. That may mean that it’s not going to be the best novel, and some of it may involve going back to doing rewrites, but it also means exposing the innermost workings of my imaginary world to you. Which also means about 30 new posts for the month of November. I’m toying with the idea of changing the name for the time being, briefly, to the title of whatever I’m working on.

Why announce it? And why announce it now? I’m announcing it now because it’s a month away... I need to prepare. And I’m announcing it here to keep myself accountable. Back when I was beautiful, I had a dream. I wanted to be a writer. I wanted to write a novel. Not even a the Great American Novel (but not as low as the Great Canadian Novel) but one that entertained people. And I let a lot get  in the way of that. So, no more. I talk a lot about carpe diem, grabbing life by the throat and doing something... so now I’m going to do something about it. Let’s do this thing.

In the meantime, I hope to bring you all of the regular posts I usually do, with maybe a little information about what I’m planning to write. If you have any suggestions, please feel free to email shakespearebad@gmail.com with them. Or post it directly to my Facebook page. (and like it. If I get four more likes, I win a free toaster. I think.)

In the meantime, I need to start working on my Breaking Bad/Arrested Development crossover fan fiction...
Posted by Bad Shakespeare at 4:00 AM