Romeo and Juliet: This is Not the Moral You Were Looking For... 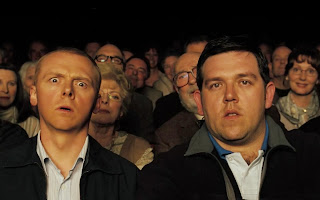 Romeo and Juliet is perhaps one of the most adapted of Shakespeare’s plays. It’s also probably one of the more well known, too. If saying the word “Shakespeare” doesn’t envision a dude in tights talking to a skull, chances are you envision Romeo looking up at his Juliet from her balcony. Or you're envisioning a lot of dead people with beards, which is darker, and not relevant to this post.

For those of you who don’t know what Romeo and Juliet is about, then... really? Do I really have to recap the plot of Romeo and Juliet to you? Do you really not know? Or do you want me to do it for amusement? Fine...

The Montagues and the Capulets are fighting like the Sharks and Jets all through Verona, basically trying to kill each other. The Prince finally has enough and tells them to cut it out, he doesn't care who started it, if it keeps happening he'll be the one to end it. (Also, neither family knew who started it. That's important when analyzing the play intelligently, rather than just saying that two teenagers killed themselves for a three day love story. But I'll get to that.) Then Romeo, attempting to catch a glimpse of Rosaline (from the house of Capulet, which begs the question of whether he was romantic or begging for trouble) instead views Juliet, and they fall in love at first sight despite the fact that their parents hate each other (and her arranged marriage to someone else. All minor details when you’re a teenager in love). Later, they both go the world’s worst Friar to get secretly married. Then, enraged that he would dare set foot in a Capulet house, Tybalt (Juliet’s cousin) threatens Romeo and kills Mercutio (The Prince’s cousin... you know, the guy who at the start of the play didn’t want any more killing?). Romeo responds by promptly killing Tybalt, and being banished forever. Finally, through a series of hilarious misunderstandings, both Romeo and Juliet end up committing suicide. Oh, and Romeo kills count Paris on his way to kill himself because not enough people died up until this point.

(In Shakespeare times it was very important enough people died to differentiate between comedy and tragedy. Remember, Shakespeare once killed a guy offstage by having him eaten by a bear because he couldn’t decide if it was going to be a comedy or a tragedy. Spoiler: It ended up being a comedy.)

I enjoyed it. I know they didn’t use ALL of Shakespeare’s words. No one does, all the time. (The most notable times when all the dialogue was used was when Kenneth Branagh directed Hamlet and Thor. Feel free to fact check that second part.) Even Joss Whedon, in an adaptation that I enjoyed immensely, changed a few lines of dialogue (and a gender) in Much Ado about Nothing.

What this version of Romeo and Juliet really captured, in addition to the age appropriate casting, (A feat not seen since High School Musical riffed this plot.) was the fact that the whole Romeo and Juliet romance is secondary to the main plot of the play.

Ah, the collective sound of gasping. I love saying things that do that.

Ben Affleck will be a good Batman.

Sorry, that has nothing to do with Romeo and Juliet, I just wanted to hear the gasping again. Moving on.

Romeo and Juliet gets a wrap of being just a love story about two teenagers with a huge age difference that get all over-dramatic and then kill themselves. What’s missed in that oversimplified version of the plot is WHY they kill themselves. (Beyond the hilarious misunderstanding of the world’s worst friar. Seriously, he sucks at his job. Big time.) But it’s more than that. The play itself is about two families that hate each other to the point that their kids - who really have no stake in the feud - end up killing themselves because telling their parents that they're in love is a fate worse than death. Literally What’s important in this play is what is NOT said. At no time are we given any exposition as to why the Capulets hate the Montagues. They just do. And they’re willing to kill over it. Remember: Tybalt threatens to kill Romeo over the fact that he set foot in the house hold. (If he’s mad about feet and houses, imagine... naw, that one is too easy.) Romeo refuses to do it because Tybalt is now family. (Ultimately, it’s the Prince who pays the price for that one.)

This version really seems to nail that. From the get-go, the focus is on the families, not just the doomed lovers. Because of the title, many go straight to the love plot of this play, but in the end, what’s shown is the destructive power of this feud. Loved ones dead... notably the younger people who are the most removed from the feud, and two people who had nothing to do with the feud, and were just in the wrong place or friends with the wrong people. (There’s a nice balance in the number of people who end up dead. Or as nice as it can be when you think about the fact that we’re talking about teenagers dying for a feud.)

I also enjoyed that this version focused so much on the action in the play... this is a very actiony (is that a word? I’m going to use it as a word) play. First of all, there’s the short timeframe, there’s the fact that it starts with violence, much of the climax is involves violence, and then one more person dies because hey why not, and this version manages to focus on it.

I wish it ultimately had used more of Shakespeare’s original dialogue, mostly because it gets so many other things right about the play, as I just noted. It’s a little distracting at first, but it’s not so distracting as to take away from the moral of the original play (senseless fighting is senseless.) It’s just really more streamlined. Think of it as the Sparksnote version of the play, managing to highlight what’s important without losing casual viewers.
One big advantage to writing a review now is that most of the professional critics have had their say. Yes, I know this didn’t get good reviews. I don’t particularly care for “reviews” from people who have to see so many movies they’ve forgotten what good movies are about. I think it’s important to focus on what works, particularly with a Shakespearean adaptation such as this one which keeps in the good, and is an excellent jumping off point to the original text.
Posted by Bad Shakespeare at 4:00 AM

Email ThisBlogThis!Share to TwitterShare to FacebookShare to Pinterest
Labels: movies, Much Ado About Nothing, Romeo and Juliet, Shakespeare