Why I Hate Shakespeare 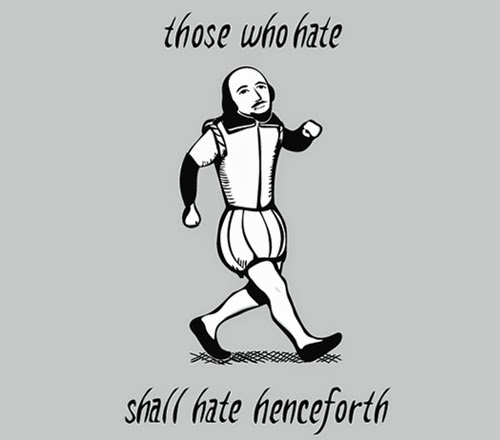 Recently, Buzzfeed took time from posting captions to GIF’s and tricking you to clicking on them to post a real live, written article about “Why [The writer] hates Shakespeare” in honor of Shakespeare’s 450th Birthday. I’m a Shakespeare fan, but I decided to click on it because... well, I’m a Shakespeare fan. A real fan doesn’t blindly follow their devotion into the abyss, they should study their subjects, understand it, and be able to talk intelligently about it, even the flaws.

For instance, look at Firefly, the space-western I talk about quite frequently. I’ll be the first to tell you that it’s awesomeness can’t be comprehended by everyone, and as a result some people don’t understand it. Joss Whedon probably should have made it less awesome. But, we can’t all be perfect.

As anyone who reads this blog knows, if you’re going to talk about something, you should be able to talk about it intelligently. Even if you hate it. I dislike Twilight. I can tell you specifically why I hate Twilight without being on the bandwagon of “It’s popular so I hate it” that seems to take up most of the conversation around it. For instance, I actually read the books, so I know why I don’t.

The writer of this particular article seems to have read exactly two Shakespearean works, and didn’t really seem to spend any time trying to understand them. One of them being the misogyny associated with Taming of the Shrew (which is under debate) and the other being Hamlet, which apparently the writer took very little time to understand, just realized that they didn’t like it.

Quick programming note: Bad Shakespeare does not link to blogs or articles trying to be controversial and wanting clicks, posting why you hate Shakespeare during the month that the literary world is celebrating his 450th birthday is a prime example of that. If you’d like to find it, direct your Google to “Why I hate Shakespeare Buzzfeed”. Or, if you use Bing, search “How to set Google as my default search engine”, set that up, then Google the above phrase.

The thing is, there are plenty of reasons to hate Shakespeare beyond, “I didn’t understand it.”

Part of the problem with teaching Shakespeare is that too many teachers don’t teach how to understand Shakespeare. For one, I’m a firm believer that Shakespeare shouldn’t be read at first.

Shakespeare wrote plays. I’ve made this point before. Do you want to read Die Hard: The Script or watch Bruce Willis kick terrorists out windows in Die Hard: The Movie? how is William Shakespeare, who wrote plays, any different? Yes, it’s important to understand his language. Yes, after watching Bruce Willis go all Bruce Willis on Alan Rickman you may want to study the important language he used during it, including what is meant by “Yippie Kay Yay...” but first, it’s important to watch what happened.

There’s also the fact that we don’t even know if Shakespeare was the best writer of his time. There’s a gentleman you may have heard of when Shakespeare is referenced named “Henslowe.” This dude was basically the box office report of his time. What he did was record what plays were popular, like this new one about a guy who cooks the guys who raped his daughters into a pie and made their mother eat it, and then said, “hey, it’s popular!” and the plays survived. Plays that were less popular, like the one about a space western, may not have survived quite as long, and there’s a chance we don’t know about it.

So Shakespeare was popular. That’s why we still know about it. Now, anyone who has studied his language and writers of that time do know that he was a good writer in the way he turned a phrase. But that takes further understanding. So, why don’t we convey this when teaching Shakespeare? Just because he’s popular, do we have any evidence that he was any good?

Another reason to hate Shakespeare is because he stole just about everything he wrote. Macbeth, Romeo and Juliet, Hamlet, Titus Andronicus, Midsummer Night’s Dream, Much Ado About Nothing, Othello... these were all based on histories that he fictionalized, plays written by other writers, or popular stories of the day. You know how we all complain about reboots and sequels? Yeah, look at our boy Shakespeare. Fun fact: The story that Midsummer Nights’ Dream was based on ended with a gay marriage, Shakespeare wrote it out of the ending of his play.

In fact, evidence is that Shakespeare only wrote one completely original play, The Tempest, which is said to be written about why he no longer feels relevant in the ever changing world.

But it’s never ok to hate Firefly.
Posted by Bad Shakespeare at 10:01 AM