It's Going to Be Ok 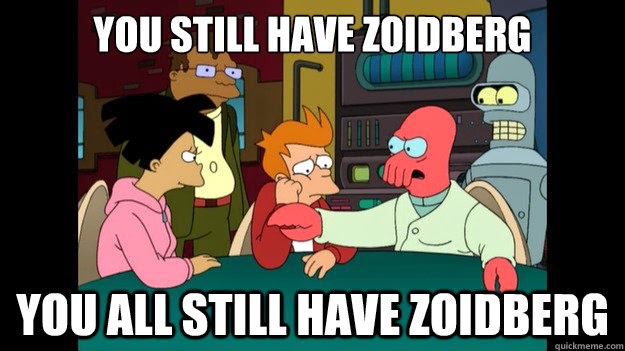 Yes, you. Who’s currently curled up in a ball with the full body hazmat suit, sitting in your closet slowly waiting for the world to end in either a fiery ball of melty goodness, freezing to death, or intelligent apes.

I’m talking to you.

I wanted to let you know… it’s going to be ok.

Yes, I know that the news seems bad right now. We’ve got diseases that people are so misinformed about they are avoiding restaurants. There are wars. Terrorists. Shootings. Action figures in Toy Stores aimed at adults that might make kids… I don’t know, try pork pie hats? And let’s not forget it’s election season, so if you’re watching any of the attack ads it seems like you have a choice between voting for a the guy who eats babies and the woman who sacrifices bunnies to her evil god.

But I’m telling you, it’s going to be ok.

It’s easy to get sucked in by the terribleness of it all. After all, the large headline or breaking news isn’t: “Millionaire gives away fortune to fight disease.” It’s: “Panic over Ebola momentarily interrupted by mass shooting.”

I know I’ve gotten sucked in by all of it, and It’s stressed me out a little bit.  I know it’s affected some of the posts here on Bad Shakespeare, and even some of my interactions with people in my life. Which is why I wanted to take a moment to remind everyone… it’s going to be ok.

I’m not saying there aren’t problems. What I’m saying is that maybe take a few minutes before you start stocking up on tattered leather jackets as you fear we keep moving more and more towards Mad Max Times. It’s not that bad. The Walking Dead is a TV Show, not a sign of future things to come. You probably won’t have to put down your best friend who’s been bitten by a zombie. You won’t have to fight past the massive hoards of people for that last, previous vial of water to help bring about the world. You probably won’t have to live through Waterworld. By that I mean the movie. Seriously, now THAT was a disaster.

Yes, bad stuff happens. Fortunately, for all the stories where something bad happens, typically it’s followed up with something good. People pulling together to help each other out. It’s not always obvious, because the big story is all about how that thing that happened is going to kill us all, but trust me… there are people there who are willing to help you out.

And yes, there is outrage. Some of it is justified. Some of it can wait until later. Don’t get sucked in by getting angry at literally everything, including things you can’t control. Sometimes, it’s important to let it go, relax, and just focus on the good.

It’s really, really important to focus on the good. For instance…

They are currently working on a 3rd Bill and Ted Movie. That’s right, Keanu Reeves is once again going to return to the role of Ted Theodore Logan, the role he was born to play.

Benedict Cumberbatch is still a thing.

There are hundreds of books you haven’t read yet. Pick one up. Today.

Next week starts Nanowrimo, which means on this very blog you’ll be able to read YA High, a satire of Young Adult Novels, on this very website!

There’s a group of people that dress as superheroes and go visit sick kids in hospitals. They do this with their spare time.

Speaking of sick kids, WWE Superstar John Cena just visited his 400th kid for Make a Wish. 400th. Even though he’s getting too much of a push that’s holding down some of the other talent, that’s amazing.

The weather is getting colder, which means pumpkin spice stuff is about to go away, and we’re about to be inundated with peppermint stuff. Peppermint. Everyone’s breath will be so fresh.

Here Comes Honey Boo Boo was cancelled, thus raising the bar. I mean, it’s a little late on this, but come on.. it’s a start.

Bill Murray is still around. Bill. Freakin’. Murray. How can you be sad in a world that features Bill Murray, America’s Drunk Uncle?

Look, I know it can be bad. And I know it doesn’t seem like it’s going to be getting any better, but remember it’s the New’s job not really to bring you hard hitting coverage of what’s going on, but rather to sell ad space. Giant headlines that are basically devolving into “We’re all gonna die” sell better than “Hey, don’t sweat it.” And then their are bloggers, think piece writers, and whatever who’s job it is to make sense of these things, and they don’t always have the best “research” plans. Most of the time it goes back to using the caps lock and making you afraid enough to read their next exciting piece.

So, everyone… relax. Take a few minutes today to sit outside. Go grab some greasy piece of death that you enjoy eating, and eat it. Turn of the television, computer, whatever, and go read a book, play a video game, watch a movie that has nothing to do with the perceived terribleness outside. No matter how bad it gets, remember: we live in a world that has given us a SECOND sequel to Dumb and Dumber. Now, at that point, doesn’t that mean that pretty much anything can happen?

Life is short. Stop sweating it.
Posted by Bad Shakespeare at 9:40 AM