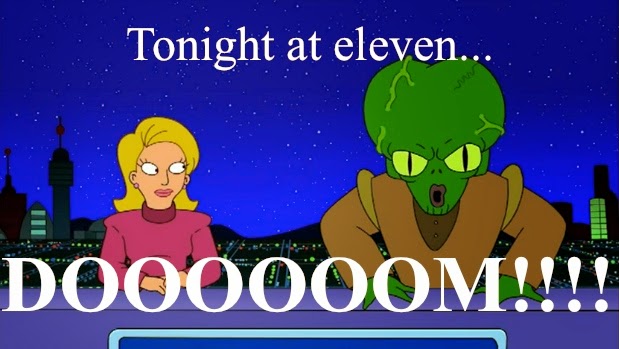 “I like the cover," he said. "Don't Panic. It's the first helpful or intelligible thing anybody's said to me all day.”

There’s this book I really like called Tricky Business by Dave Barry. It’s about these criminals on this boat and there’s a heist, and I’m not making this up, it’s hilarious. But there’s a subplot where this boat with the criminals off the coast of Florida is hit by a hurricane. Every once in a while the plot meanders back to a news crew covering this hurricane. At first, they get news that a boy has been struck by lightning. So they send a news crew out, who are promptly killed by the storm. Then another crew is sent out, and they’re killed. This continues until the killer storm has killed only members of this news crew, who have dubbed it a killer storm because they were the only idiots (other than the criminal idiots on the boat) who have been killed by the storm. It’s funnier than I’m making it sound, but I’m making a point.

In case you’ve managed to avoid all television, websites, newspapers (kids, ask your parents) and various people on the street wearing gas masks that aren’t actually huge fans of Breaking Bad, we’re in the midst of a epidemic. It’s an epidemic that has killed at least one in the US, and has infected another. That’s right… it’s Ebola. The disease that is a legitimate threat in West Africa and such movies as Outbreak, but in the US has infected and killed less people than Taylor Swift has dated and written songs about.

Keep in mind, I’m not trying to downplay the very real threat that Ebola is in West Africa, where they don’t have the resources that we do here in America. What I’m trying to point out is… everyone stop with the panic. Please.

This always happens. Something occurs, and then people lose their minds over panic, despite the fact that in order to get Ebola, you’d need to have constant contact with the bodily fluids of someone already showing symptoms, and it can be cured by such things as “washing.” But before this, it was respiratory virus that everyone has forgotten about because they’re busy saying we need to block all flights and seal off all our borders because three hospitals have mistaken the flu for Ebola. Which isn’t a death sentence.

This is the second post I’ve written about it, but today I want to focus on something a lot more deadly than a disease that isn’t airborne and might spread as far as Texas: fear. We live in a culture of fear, and it’s going to have to stop. Mostly with idiots panicking over nothing.

I try to be polite a lot of the time, but I’m going to say it here: idiots. Panicking over nothing.

For me it really hit home when people were protesting the doctors who were diagnosed with Ebola after going over to West Africa to help people. They were brought back to the US, where we have the resources to help these brave people, but some people that couldn’t be bothered to get off the couch for any good reason, decided to start the panic train.

We need to stop being afraid of stupid stuff. Giant headlines that proclaim our doom, only to not come into fruition, then they’re replaced with bigger headlines that once again… proclaim our doom. We need to stop turning to the loudest screaming heads or “experts” that know nothing. Yes, I’m aware of the irony that I’m writing this what with all my knowledge of Ebola coming from research and not my degree in English with a concentration in Theatre. But hey, if CNN can get a sci-fi novelist as their “Ebola Expert” then why not me?

There are so many other things that people can concentrate on right now that doesn’t involve a disease that’s largely contained and if you manage to defy all odds and actually get, you’re probably not going to die. In fact, I’d recommend if you do manage to get it while at home, watching the screaming heads proclaim our latest doom, take a few minutes to buy a lottery ticket.

Some fear can be good. The fear of that dark cave helped our ancestors eventually discover if they took this fiery substance into it, it would be warm and bright. Fear of dying alone eventually invented match.com, so that’s not entirely bad. Fear of not knowing who the best Star Trek Captain was (it was Sisko) invented the internet, which in turn allows me to publish my completely unqualified opinions.

But some fear is bad. Fear that’s used to sell you crap you don’t need, or fear that is being used to generate website clicks or sell newspapers for something other than making pirate hats and then annexing Jerome’s cubical in a spectacular coup. That was a fun day. But you can’t walk around afraid because some website decided they were going to make their top story about a “possible” case of some disease that later turns out to be false, they just publish that story smaller.

Posted by Bad Shakespeare at 8:02 AM