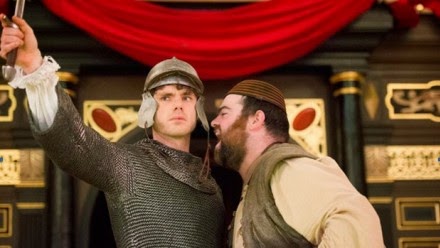 I ended up touring the Globe Theatre in London twice. I was supposed to see Knight of the Burning Pestle twice, too, but that idea got shot down quickly, as my wife had no interest in seeing authentic Jacobean Theatre by beeswax candlelight.

I can’t imagine why.

Needless to say, I was excited to see Knight of the Burning Pestle at the Sam Wanamaker Theatre which is very Globe adjacent in London, England. Also, there’s a BBQ Joint right across the way - of course that’s another post. But it’s a pretty authentic theatre, and this was supposed to be a pretty funny show.

Of course, I didn’t expect the standing...

Let me back up a little bit, as part of the whole London Theatre Tour, we of course went to go look at the Globe, a replica of where Shakespeare put on some of his most famous plays. I had already gone to tour it during my vacation a few weeks earlier for Christmas, but I was touring again, this time in my official capacity as “student” and less in my capacity as “Shakespeare enthusiast.”

Also, I say “replica” because there have, in fact, been three Globe Theatres total. The first one was was burned down when the special effects for one show ended up getting way out of hand. The second one was torn apart after the Puritans decided that theatre and entertainment was evil, and sometime just before they decided to take that trip over here to America to give us their own special brand of deciding things were “evil.” Eventually, Sam Wanamaker decided he’d had enough, and made his own Globe with donations because that’s what you do when you’re dedicated: You just go out and do it.

However, in Shakespeare’s day Theatre wasn’t popular enough (remember: They were totally cool with just letting it be torn down because “evil”) to really merit having it indoors, plus there was that whole thing of Thomas Edison not being born for another 100 years, which really handicapped his ability to create a light bulb sooner. As theatre grew in popularity, some of it was moved inside and done by candlelight. Since this was “December in London” and the weather in December in London is... well, it’s pretty horrible... the Globe itself wasn’t having anything outside, but instead was inside the playhouse, all done by candlelight.

That brings us to our presentation of the Knight of the Burning Pestle. In order to make it as authentic as possible, some of the cheaper “seats” were actually just spaces to stand behind a metal bar and look over the edge to see most of what was going on.

Guess which “seats” the group-rate college students got?

Knight of the Burning Pestle is a play about a group of players trying to put on a production of another play, called The London Merchant. An angry Grocer and his wife are sitting in the front row and decide they don’t want to see that play, rather they want to see a play that glamorizes the grocing lifestyle, so they get the players to add their man Rafe into the production and add an entirely new section called “The Knight of the Burning Pestle” (a pestle, for those of who who like me didn’t know what it was until we were told by the handsome Rick Davis, is what’s used to mix herbs in a bowl called a mortar. Grocers would use them.) The London Merchant is a pretty standard tale about a rich dude that won’t let his daughter marry who she wants, with a sub-plot about an old man named Merrithought who throws his money away living a happy lifestyle and his wife leaving him because of it.

Sore legs aside, this one stands out as one of my favorites we saw while we were in London. Firstly, it was the funniest. I mean, part of the plot was a guy dancing in his underwear because he’s lost everything. “Merriment and mirth/will keep you from the Earth” was his refrain, and we sang it for a while as we trudged back across the bridge to catch our bus, legs on fire from standing for three hours.

The cast took full use of the minimalist stage, coming out into the audience, even coming out to taste some of the ice cream of one of the random audience members that got a seat. Because the “audience” is part of the show, there’s a lot of nods and winks to the audience.

This play was written by a playwright that wrote around the same time as William Shakespeare and was intended as a parody of the chaste romantic plays that were all the rage at the time. The “pestle” is often used as a double etendre, and one of my favorite exchanges involves the grocer’s wife (not forgetting names here... her character name is “grocer’s wife”) lamenting the loss of a child and Rafe offering to “give her a new one.” So the comedy is pretty funny, and the cast worked hard to ensure that everyone was in on the joke.

Overall, this was one of the more interesting experiences from my trip to England. It was a play as close to the Globe as I was able to see, being that it was cold outside, and I didn’t want to spend too much time standing outside. It was interesting seeing a play performed that I wasn’t familiar with from Shakespeare’s day, and still getting the joke because of the skill of the players. And it was just interesting to see something that is a parody, one of my favorite genres of today and how it translates across the page.

Like I said, this was one of my favorite plays. Some people were a bit divided on it because it did go all over the stage, and yes, we missed some of it from our unique vantage points atop the stage.

But it was a lot of fun. No one can argue that.
Posted by Bad Shakespeare at 3:30 AM