Book Report 52 Project: The Future of Us 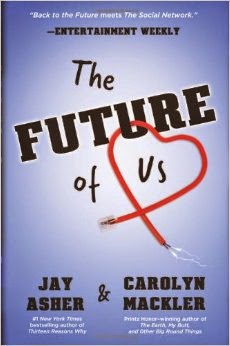 Let’s pretend you can go 20 years a back in time, and you try to describe Facebook to them. “So, there’s this website, right? And we all log onto it, and we can see how anyone we ever met was doing. Even if we met them in passing!” It might be hard to explain to them just how it works. If you talk about looking at it on your phone they’ll look at you funny, because even if they have a cell phone, they don’t have internet on it. Myspace and Friendstr are still a few years off. Even logging on tot the internet in a way that doesn’t sound like a cartoon is a pipe dream, or it means you have sound turned down.

And watch out if someone wants to use the phone. That just won’t happen.

That’s the concept of the Future of Us, a young adult novel by Jay Asher (who also did the excellent 13 Reasons Why… and you should probably read that) and Carolyn Macker. Josh and Emma are typical teenagers in 1996, when Jost gets one of those free AOL CD-Roms that promised the internet. If you didn’t live back then, they started out seeming exclusive, but they were EVERYWHERE. We eventually used them as frisbees and to thatch roofs. Anyway, because it’s a Young Adult Novel, Josh has feelings for Emma, and they’re close friends. He’s already admitted this to her, and they’ve started to grow apart because of it. But, of course, his mom makes him bring over the CD-ROM so she can start using the internet. She boots it up and sees… Facebook. Of course, it doesn’t exist yet, so what they see is a glimpse into the future. Now, each decision will lead to a new and different life for them, including one where they’re no longer friends.

I actually really enjoyed the concept of this book, even if it did hit a lot of the cliche marks about love  and time travel. I really enjoyed it more for the role of Emma, and I felt she should have been more the central character rather than focusing dually on her and Josh. The whole “he’s her friend, he has a crush on her!” thing was a little cliche, and it took away from the core of the story, which was Emma learning her destiny, looking into the future, and finding out… she wasn’t really happy.

We don’t think about that a lot abut whether we’ll be happy in the future. Back when I was studying how to be a teacher, I would sometimes fantasize about zipping ahead magically 2 years into the future and becoming a teacher. I can even look back at my own facebook statuses, which include in 2010 being happy when I got the acceptance letter telling me I made it into the program. I didn’t know what the next five years held for me, that it would take me down this interestingly rocky path.

Emma is like that. She keeps logging onto Facebook each time finding a new and different future in front of her, some of them kind of dark and full of loneliness. She keeps hitting that button, hoping to find something different, but doesn’t even as she works to make things happen. Josh, on the other hand, is working to make things happen, but his story kind of skips over his own revelations.

But it is this uncertainty towards happiness that sort of strengthens her as a character. I wish the focus wasn’t so much on how she was going to (spoilers) eventually end up with Josh. Sort of like a reverse “don’t know what you’ve got until it’s gone”. She would see different futures where he ended up with someone else, and her own life growing more and more miserable. I feel the whole “Josh” thing was a bit of a letdown in the long run, because she didn’t really “learn” from it so much as just “didn’t want to see him with someone else.” And it’s unfortunate, because that weakened her a little bit, and took away from a brilliant character who wasn’t just a one note character at the start. The whole “Josh likes me” thing weighing with her heavily, and she was dealing with it.

I put this in the category of a “sorta wasted potential book” but at least executed really well. I liked the reminders of 1996, and the sheer insanity as they dealt with the things around them not knowing words like “Netflix” or the complexities of losing one’s phone. (The former is unlivable without, the latter is… well, absurd in its own way.) I just wish the focus had shifted more to Emma as a character, who was dealing with her own problems and seeing the result in real time, and not leading directly to a romantic payoff as the “reward.”

I sound so jaded when I say it like that. Of course, though, I’m happy the two characters ultimately found love, I just wish it was through a different way. (Like maybe a flash forward to how she reacted when the REAL Facebook came into play.)

Overall, I think this is the first book I’ve read in this project that I don’t have extremely strong opinions about. Its worth a read, even if to get some more Jay Asher in your life (and you should) and it’s an interesting concept to explore.
Posted by Bad Shakespeare at 9:08 AM