Conspiracies are Everywhere, if You Look Hard Enough 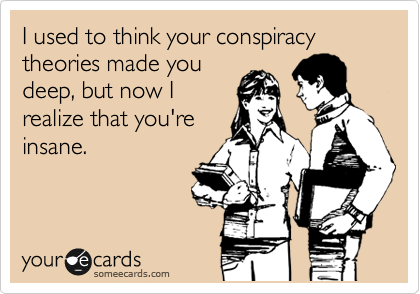 The internet is a useful tool.

Like, for instance, if I want to know when that movie I really want to see is playing... you know which one... I just have to type in a few words, then all of the sudden: Boom. I know exactly what I’m going to go see, and when I’m going to go see it. I don’t even have to go to a dedicated movie website, I can just type in a search for Avengers 2: Age of Ultron or The Latest Nicolas Sparks Movie Where Two Pretty White People Meet Then One of Them Dies and it shoes right up on my computer.

I mean, its even helped me. Had the internet come along, Bad Shakespeare would probably be a ‘Zine in the parlance of the 90’s when I may or may not have grown up, and would be read by everyone I handed it to after photocopying it and handed it out on the street corner. I wouldn’t be doing three posts a week, that’s for sure.

The downside of the internet is that it gives a voice to literally everyone, even people who probably shouldn’t have some kind of voice. By those I mean... conspiracy theorists. And I don’t meant the rational, questioning kind, but I mean the President Obama is Really a Lizard Man kind. I mean the ones that break down any news story into a calculated plot that the robots are not already sentient, but the only reason they haven’t invaded yet is because of this one lone person deep within the new Entertainment Weekly story about Once Upon a Time Spoilers was parsing out the details.

Given that I love a good yarn as much as the next person, I’ve decided hey... why don’t I come up with a few good conspiracy theories? After all, I have a blog, right? Might as well put it to some good use, not just Fast and the Furious analysis. (Which you can still read. Seven new editions. All last week)

So, here we go... my top conspiracy theories.

-I don’t really believe Benedict Cumberbatch exists. I think his real name is Frank Smith, and he’s actually from New Jersey. His cheekbones and accent are computer generated, and part of a secret algorithm that tells us that we’re looking at a beautiful British Man, but no one is really there.

-I still have yet to meet someone who will tell me that oatmeal raisin cookies weren’t invented to fool people who want a good chocolate chip cookie. This was invented during World War 1, back when chocolate was scarce, and a scared populace had to make do with raisins.

-I think Pepsi and Coke are the same drink. One just tastes blue and the other tastes red. Think about it.

-I’m still not fully convinced that Alaska is actually a state so much as a slick way of us to start our slow invasion of Canada. Think about it, with Alaska being Alaska all the way up there, it currently turns Canada into a “nation sandwich” nestled in between two halves of America. How much will it take until we just start... moving our borders until Canada is nothing but a thin, easily invaded sliver.

-Speaking of American politics... no. No I’m not going to touch this one with a 10 foot pole.

-Birdman did not actually win the Oscar last year. Sean Penn was so taken aback by the write in vote, Guardians of the Galaxy, that he had no choice but to say the first thing that came to his mind. His friend directed Birdman. The slip of the tongue only set to make things right, and so the planned CGI Groot wouldn’t take the stage to hold onto the trophy. Also, the kid from Boyhood was a set of brothers.

-Batman is actually based on a real person, but the people in Gotham City don’t want you to know about it, lest it bring more vigilantism to the streets. They actually even wiped out any mention of the word “Gotham” just in case someone should stumble upon it. That being said, Gotham is actually still stuck in the 1960’s when it was perfectly acceptable to smoke a really long cigarette while threatening people with a cane.

-Lastly, the reason that all of these television shows are coming back is that humanity never really survived passed 2015. It’s 2213, and we all live in an artificial environment, with old TV Shows being recycled again and again. It isn’t until we can follow our leader and break free of the robot’s control that we’ll really be free. The Matrix is real, coppertops!
Posted by Bad Shakespeare at 5:00 AM

Email ThisBlogThis!Share to TwitterShare to FacebookShare to Pinterest
Labels: fun with writing