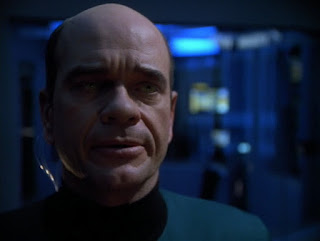 Those of you who have been following for the week, you know the drill. I’m writing about an episode of each of the Star Trek series in order, with one glaring exception that you’ll note today. Rather than covering Deep Space Nine, I’m jumping right to Voyager. There’s a reason for that, and we’ll get to it on Friday. But each of the episodes we discuss have some significant literary element I want to discuss.

To recap, on Monday we explored the “City on the Edge of Forever” from the original Star Trek, and the fact that it doesn’t have a standard, “good guys win” ending. Then, we kept our Wesley Crusher jokes to a minimum as we discussed “Inner Light” a fantastic hour of television that explored the importance of stories, even if it involves being zapped with a beam of light. Originally I was going to discuss the underrated Voyager episode, “Prototype” but then I realized there was one even better that explored the themes I wanted to discuss. How important are stories?

The Doctor: “What's going to happen to me now? Will you put me on display? The holographic Rip van Winkle?"

Star Trek: Voyager was one of the more... let’s say “problematic” Star Trek series. Not exactly beloved by fans, it had it’s share of problems. While I never felt it was horrible, I could see where some of those problems came from. But overall I enjoyed it, one episode in particular that sticks with me even today.

We’re all concerned with our legacies. What will the world think of us once we’re gone? What kind of impact will we have made. Star Trek: Voyager asked that question once. Voyager was about a starship that was cut off from Starfleet and hurled 75,000 light years away from home in their first episode. (Sort of like Lost in Space, but with more Klingons and less robots flailing their arms uselessly.) One of the more interesting characters is that of the Doctor. When Voyager was thrown that far away, most of the important senior officers who names weren’t in the credits were killed. When the doctor was tragically killed by an exploding somethingorother, and for some reason a ship of 300 people only had one doctor on board, the logical solution was to build a holographic one.

I like Star Trek. A lot. But I’ll be the first to admit that some solutions don’t make sense. It’s science fiction. As the song says, “repeat to yourself it’s just a show, you should really just relax.”

“Living Witness” asks the question, “what impact did Voyager have while it was flying through space, trying to get home?” 700 years in the future, the Doctor (or his backup program... it’s all very fuzzy on what exactly happens) is activated in a museum and told about Voyager’s path of destruction through their world. Of course, we, the viewer know that something is up; Voyager is a peaceful ship, if prone to stumble upon things. Never once did they send a Borg attack army against people, at least not on-screen. Apparently they got involved in a dispute between two alien worlds, and through the years they got a reputation as destroyers. The Doctor does everything he can to change their minds; eventually the museum is destroyed because the Doctor attempted to tell the truth; people wanted to stick to their stories of martyrs and claim themselves as the “good guy.”

I chose this episode over “Prototype” specifically because it has the element of what a story is, but with deeper consequences. (and a lot less killer robots. Except the Doctor. In fake-flashback.) It shows how much we hold onto our stories, and how beloved they can become. In the end, the Doctor... an artifact of Voyager, an actual witness to what occurred.... is able to set the record straight. And when he didn’t say what people wanted to believe, they rioted. When he went against the stories these people believed, they couldn’t accept it.

The episode ends on a note of hope, showing that eventually the warring alien races put aside their differences and worked together as the Doctor tried to rejoin his friends back home. (or his backup program did. Like I said. Fuzzy.)

Tomorrow we look at Enterprise’s ending and the importance of those stories we tell with “And These are the Voyages...”
Posted by Bad Shakespeare at 4:00 AM