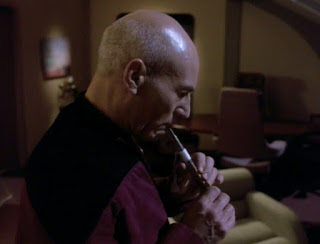 This week, as we count down to Star Trek Into Darkness (an English Teacher’s punctuation nightmare), Bad Shakespeare is taking a look at some his favorite episodes of Star Trek, and how they helped influence his love of literature. Yesterday we visited the Original Series with “City on the Edge of Forever.” Today we look at The Next Generation and Captain Picard’s “Inner Light.”

Mention “Inner Light” to any true fan of Star Trek, and it will launch the nerdiest debate ever on whether this episode was the best of Next Generation, or if “Best of Both Worlds” was the best. The answer is simple: “Inner Light” isn’t handicapped by the presence of Wesley Crusher (Wil Wheaton can pretend he’s embraced now... never forget Wesley Crusher. Those who forget Wesley are doomed to repeat him.)

“Inner Light” is a fantastic hour of television. It’s actually a pretty simple scenario: Picard is zapped by a magic space beam and lives out his life on another planet. Ok, maybe it wasn’t that simple. In the end, it turns out that the magic space beam is actually the memories of another planet, designed to help preserve the memories of an ancient race.

Star Trek is usually at it’s best when it’s telling a story that is helped by science fiction, but is understandable to just about anyone, and “Inner Light” is evidence of that. When Picard is zapped, he’s transported to another world, and he ends up living out an entire life, experiencing a culture, learning what it’s like to live on that world. The stories of this world (it turns out that the world died shortly after the probe containing the magic space beam was sent out) needed to be told, they needed to live on. Picard absorbed the knowledge of this world by living in it first hand. (All while his friends ran around, afraid that he was dying. Maybe the people who live on the world had a strange sense of humor?)

Stories. Stories are important, especially the stories that make us who we are. I always liked the fact that “Inner Light” understood the importance of stories.  At the end of the day, stories will continue long after we’re gone.