Let's Not Britta This Up... 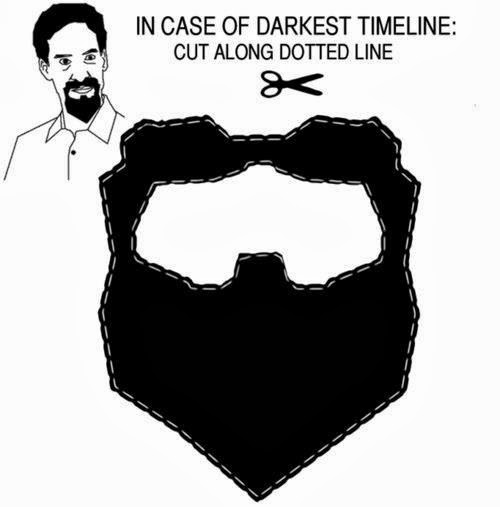 I like television. There aren’t a whole lot of shows that I’ll make time for, but when I do I like to lose myself in an episode of Arrow, Parks and Recreation, The Middle, Supernatural, American Dad, or Doctor Who, if I can ever figure out when exactly it’s on.  (Seriously, get on Season 8, and get Peter Capaldi out there now.) But there’s an odd trend I’ve noticed lately that has started to annoy me. If only I had a forum in which to discuss it...

The availability of DVD, DVR’s, and Streaming Digital Media (which is a fancy way of saying “Netflix”) has changed the way we watch television. No longer are we shackled to only watching the Simpsons at 8 on Sundays... we can watch it any time, thanks to the magic of technology! (Technology that’s not a front for robots learning our entertainment habits then trying to take over the world.) Want to watch Toddlers and Tiaras at midnight on a Saturday? Simply record it, then watch those lovable scamps who are totally not being emotionally abused whenever you want.

The use of this technology has also allowed several shows that were cancelled to be brought back in new and exciting forms. Arrested Development became an experimental, almost 6 hour movie released on Netflix. Firefly became a movie that outgrossed Jessica Alba at the height of her fame at the box office but somehow didn’t get a sequel. (Two Firefly references in one week. Bring it back.) Futurama was brought back as four movies before becoming a TV Show then inexplicably cancelled yet again by network executives that achieve immortality through the tears of Futurama fans. And Family Guy... no Family Guy was brought back to television in the old, boring fashion.

It was first with Family Guy that I noticed it, though. A terrible, terrible thing. Television Hipsterism. That’s right. Once Family Guy was resurrected and got what most fans that watched the two DVD’s and countless reruns on Adult Swim wanted - more episodes - suddenly, they were terrible! Who could watch this! Why wasn’t it cancelled sooner? Despite the fact that Family Guy was doing what Family Guy always did: pushing the envelope. And of course, the envelope kept being pushed, so they kept pushing back. Fans just wanted to backlash against it. (While we’re at it, people who keep complaining about the show’s treatment of Meg: It’s a shame they don’t treat her as well as Jerry/Larry from Parks and Rec, or Sue Heck from the Middle... you get my point.)

Of course, the Television Hipsters were on top of it during Arrested Development’s Season 4, gleefully clapping together their hands proclaiming that the revival had been a mistake, despite the fact that once again Arrested Development did what it did best: Make anything into a joke, have quick references and callbacks to previous episodes, and make you have to pause what you were watching in order to catch all the references. All complaints on the new season, which were the reason that the whole show became popular in the first place.

I’ll have to admit, as an AD fan, that one got to me a little bit. I had the day off following it’s release on Netflix, and I gorged on the episodes more than once. It was a fun time. So to see so many other self professed “fans” complaining about it, it kind of made me mad.

It’s really getting to me because my little corner of weirdness, my refuge from the week, Community, is really getting hit hard. For those of you who don’t know, Community is about a Community college in Greendale.... somewhere filled with wacky residents. It’s a weird show. Famously (for fans) last season the creator left the show, resulting in a strange looking show that was Community but not really Community. It tried it’s best, but it was missing it’s heart. Now, the creator is back, ready to make more episodes, and of course before the first episode was out the first critic came out and said, “it’s just not the same!” despite the fact that it was the same as the “gap year”  and was pretty amusing. It had the old feel, all over again.

Now, some of you may be asking two important questions. 1. Did you run out of things to talk about again and that’s why you’re posting something about TV shows? Well, the answer to that is partly yes, but I do have a point. 2. Don’t people have a point to complain about shows they don’t like or have “lost it”? I agree they do, my point is just that it doesn’t seem like the complaints are coming out against anything real, it’s that they either want to be the first one to complain about something popular so they can be the first one, or they have completely forgotten what anything they just watched was about.

For any of these examples, head on over the A.V. Club, a once great website that sort of revels in the idea that complaining about something will one day make them really popular. (Yes, yes. Breaking Bad was just an ok show. We all believe you. Man of Steel was one of the worst movies of the year, because you put it on your little list. You weren’t trying to cause controversy, that was a legit complaint.) They are constantly taking a contrarian view, or are making false comparisons as a way to try to justify opinions that quite frankly don’t make any sense.

And I’m not trying to say that shows never take a dip in quality. I’m taking a stance against a selective amnesia that happens where people seem to claim that a TV show was once good, but now for some reason because everyone likes it, it sucks. There was a little club that loved Arrested Development. It was a secret society. But now, EVERYONE loves it. So suddenly, that club that held onto that show can’t like it, and they must have lost something because now everyone has “discovered it.” Same with Family Guy. They were cancelled for a reason. Community might start doing well, so people have started their pre-emptive strike against it because it CAN’T be as good as it was before, it just can’t. Too many people like, it, we can’t.

So, I’m reminding people to not just shake their hands with glee that now they can call something Worst. Television Show. Ever. I’m asking you to watch it, remind yourself of why you liked it, and just enjoy it. Stop pretending you’re part of a little club that must eschew the rest of the world.
Posted by Bad Shakespeare at 4:00 AM

Email ThisBlogThis!Share to TwitterShare to FacebookShare to Pinterest
Labels: Television