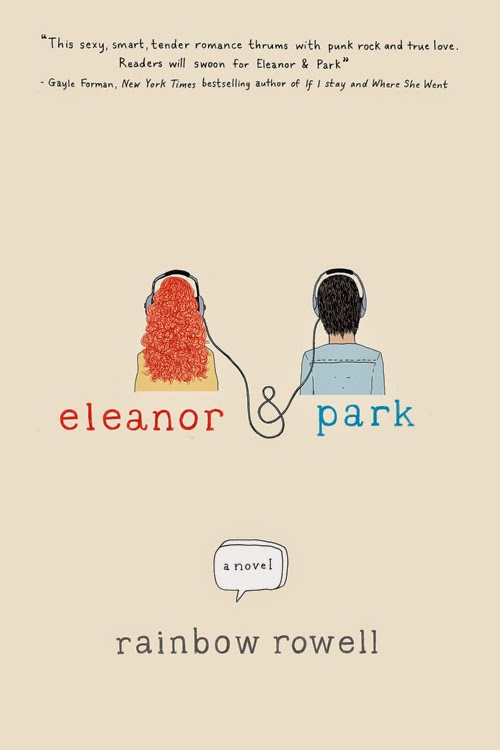 (Anyone who watched the Will Ferrell/Chris Kattan era of Saturday Night Live just got a certain song stuck in their heads while they got images of the pair bopping them back and forth. I’d like to apologize, but it’s Friday.)

In all seriousness, what is love? What makes someone “worthy” of love, either being able to accept it, or being able to freely give it? And of course, there’s the more complicated nature of first love, which in and of itself is a tricky beast, threatening to consume us when we’re most vulnerable: not understanding just what is going on with our own lives.

A lot of these questions are at the heart of the most excellent Eleanor and Park by Rainbow Rowell. I’m happy to say that as of this point, it’s one of three books that I’ve managed to read in one sitting this year, because it was so unputdownable. Hey, Apple Pages says that’s a real word. Score.

Eleanor and Park is set in Nebraska in 1986. The narrative switches back and forth between both Eleanor and Park as they are forced to sit together on the bus, Eleanor being the new kid (and redheaded, and overweight) and Park enjoying his life of comfortable anonymity by being able to slip on his headphones, listen to the Smiths, read his comic books and escape into his own little fantasy world. It’s pretty obvious from the foreshadowing (or flashforward, in the parlance of our times), and well, the book title, that these two are eventually going to start dating and fall in love. But the journey is interesting enough to keep following. For one, Park is bi-racial and has to deal with some mild bullying on his own. Not as much as we will find out (more on that later.)

Part of the real story of Eleanor and Park lies in that of Eleanor. She is coming to the school after a stint staying at a friend’s house after being kicked out by her abusive stepfather. Most of the narrative is told through her eyes, and while Park has his own issues to deal with (mostly acceptance of his father.) a lot of it revolves around how Eleanor survives in her own household, a place where her baby brother crying invokes fear in the family for bringing on the stepfather’s wrath.

As it’s pretty evident, I enjoyed this book. A lot. Setting the book in 1986, pre-cell phone and more importantly, pre-iPod, allows for a very different story to be told. When Park is starting to bond with Eleanor, first over Watchmen comics, (which makes me wonder if they enjoyed the movie. Probably not.) then over music, and she has to keep it secret, it adds to the urgency of sneaking out, lying to her mother about where she was going, and not falling back on the simple ability to being able to send a text. (Unlike some books where sending a text would solve every problem, quickly, and end the damn series two books early. I’m looking at you, Twilight.)

This also allows for the time honored tradition of the mixtape to be used. Ah, the mixtape. Back before iPods, when most music had to be purchased from a store (and if there was something you really wanted, you had to line up on Monday night to purchase it on Tuesday) when two people were trying to tell each other how they felt the’d make a mix tape. Making mix tapes was both infuriating and amazing at the same time. You’d carefully pick out each track. Make sure you had a pen to write down the full name of the song, including artist. Then you’d have to put it in your boom box. If it was before a certain age, you’d record it off another tape. Then you’d have a keepsake that would last almost a year before becoming warped. Eleanor and Park captures the magic of what it meant to have one of these tapes, slipping it into a walkman, and listening to it. I’ll admit, I love being able to carry around all my Billy Joel and show tunes on one device smaller than a credit card, but there are days I miss my big, clunky walkman. It said something.

That’s right, we still have a book to review.

There’s also the magic of first love, which as I mentioned before is complicated enough before adding the many issues that a biracial kid and a redhead from an abusive family would have in 1986 Nebraska. I don’t mean that as glib as it sounds, but a lot of the issues come from Eleanor’s unspoken question, “why do I deserve to be loved?” Her family doesn’t show it, at least not her stepfather nor her mother, one of the more infuriating characters in the book. But it’s a credit to the writer that the question never really gets spoken, but at the same time shows up throughout the book, a lot. Especially… well, I urge you to read it.

The characters help make this book, as well. I mentioned earlier Park being bullied, but in the end it’s his “bully” who helps save the day. As it turns out, he wasn’t a bully so much as a well-meaning idiot who just never saw what he was saying as offensive, rather trying to be funny. Rowell really builds up her characters well. When Park’s father discusses Eleanor’s stepfather with her, you get the sense that he probably knows that something is up, and would like to help.

I would recommend this book. It’s certainly got some hard pages to read, especially those focusing on Eleanor’s family life. This book is more about Eleanor than it is about Park, and as mentioned there were a few scenes that are pretty dark. But life can be dark, and this is a reminder that no matter what you think someone is going through, you can never fully know. That mask is another theme of the book, the face we put on when we go outside.

I could go on. But at this point, you really should just pick up the book yourself.
Posted by Bad Shakespeare at 8:17 AM