Numfar, do the Dance of Joy! Summer Movie Season is Awesome 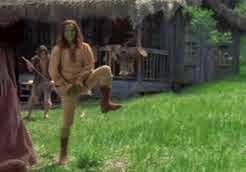 Whelp, by The Whedon we are officially past the halfway mark in the Summer Movie Season! It’s only fitting that a movie featuring the man himself, Kelsey Grammer, would mark the halfway point for this summer. I must say, from food trucks to Disney villains to timey whimey adventures to teenagers dying of cancer, it’s been quite the adventurous movie season. A good one, too, with the exception of one movie that featured a lengthy sheep urinating gag, they’ve all been pretty good.

By my count, at this point I’ve seen about 16 movies released this summer. I had to cross out some of the movies that I wasn’t sure about seeing this summer, not realizing that they were either limited releases, direct to on-demand, or Jersey Boys. Also, we had our first casualty of the summer, Jupiter Ascending, which ended up ascending to another date in February, which means it will probably conflict with our Oscar Movie Marathon, but that’s something for the future. Something something Matrix Joke.

I’ve enjoyed the movies this summer, with some things surprising me. In a summer with two movie franchises I’ve enjoyed (X-Men and the Andrew Garfield era of Spider-man), I was surprised that one of my favorite movies has been about a guy starting up his own food truck selling sandwiches. I was also surprised with all my Groundhog Day meets Halo jokes, that Edge of Tomorrow actually ended up being a surprisingly good movie, even if we’ve all been watching it for years when we play video games, find a save point, die, then go back to it. And I’ve only doubled up on one movie, that being Angelia Jolie’s perfectly sculpted cheekbones vs. CGI Faeries, which ended up being one of two movies that just stuck with me well beyond the credits. (The other one involved CGI Apes.)

Let’s look a quick rundown of what we’ve seen so far:

Hulk jokes during Deliver us From Evil: at least 3. Maybe 4. I watched a lot of it through my fingers.

Times Seth Rogen took off His shirt: Too many. (I’m not one to judge, though. Still love you, Seth.)

Speaking of which, number of international incidents caused by a trailer: One. But it looks really good.

Number of times I cried in the theater: 3. Dawn of the Planet of the Apes, The Fault in Our Stars, and a Million Ways to Die in the West. (For the last one, I just felt bad for those poor actors.)

Exploding Robot Cars: Turns out, a lot. You wouldn’t think that you’d get bored of watching exploding robot cars, but wow, at some point you want them to stop exploding and end the movie.

Number of glasses used to turn handsome people into scientists: 4.

Evil Faeries: Zero. One of them was so/so for a while, but she got better.

Dragons Trained: Two if you count the one that can turn into a raven.

Dramas marketed as Comedies: Tammy had a lot better movie hiding inside of it, and the trailers didn’t do it any favors.

Minutes of Guardians of the Galaxy Previewed: 17. And I can’t wait to see the rest!

And, as we go through this list, it’s important to remember that there are still plenty of other movies coming out. We still have a lot to look forward to as we drive towards the inevitable dumping ground that is Labor Day Weekend. I’m still looking forward to some Ninja Turtle Action. Zach Braff tries to help us forget his flying monkeyness with another movie about people coming to terms with stuff. There’s still an entire Kelsey Grammar we have to get through.  And let’s not forget that a certain talking Raccoon is teaming up with a talking plant and Chris Pratt’s Abs to help save the galaxy, and hopefully feature a Tony Stark cameo.

Let’s not forget to praise Joss, the Patron Filmmaker of Summer Movie Season, for our bountiful summer movie season. Let’s not forget Tom Hanks, and eventually, Nicolas Cage, who preside of the rest of the Movie-Going year.
Posted by Bad Shakespeare at 11:05 AM