You Can Call Me Al 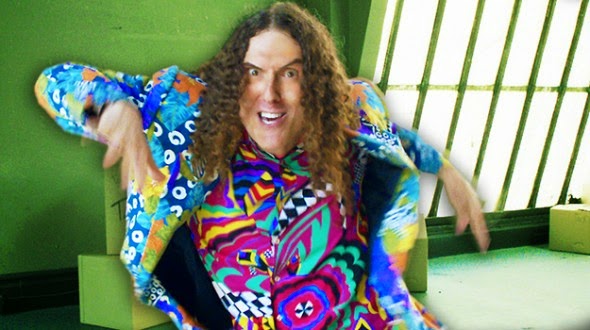 Last week, for the first time in his decades-long career, an artist was honored with an album debuting at number 1. It wasn’t he most recent pop artist that released a song that was remixed, edited, promoted, and eventually paid to play on various radio stations, commercials, movies, to force you to download their music. No, it was a guy who makes fun of all that. That’s right, Weird Al got his first number one album.

The truly funny part of all of this is that many of the people that Al has parodied over the years debuted with number one albums, then vanished from our collective memories, while this guy with the funny hair, loud shirts, and who plays the accordion (of all the hard rocking instruments in the world) managed to last for, as I said before… decades.

What makes this event truly remarkable is the fact that… Let’s face it, Weird Al shouldn’t exist anymore. I’m not saying that I dislike Weird Al… I’m not. The very first album I bought with my own money was Bad Hair Day. I still have all of his stuff today, and I laugh at each song like I’m listening to it for the first time. (I was originally was going to write “This song was a favorite of mine”, but I kept replacing it with a different song. It’s safe to say that all of them are my favorite songs.) But today, try finding a popular song that DOESN’T have some kind of parody. I mean, they’re nowhere near as good as Weird Al, but they’re out there.

Remember a little movie called Frozen? Remember how it had that one song Let it Go? Yes you do. Y’all know what I’m talking about now. Someone releases a great song, and then we have to have a million or so different versions of it by next week. That’s what Weird Al was competing with. And yet, and it shows on his new album, he does it better than everyone else. He doesn’t just parody the song, he injects it with an idea, a story, or a hook. He lovingly crafts every word… while “tacky” obviously sounds like “happy” and it’s easy to sing to Pharrell’s ever-present anthem to not being sad (It’s like I’m in a room without a roof) Weird Al takes that and runs with it, instead crafting an anthem to not being a bad person.

I could go on, but my point is that while there are ton of people trying to do parodies out there, Weird Al is the one who takes them and does a clever parody. One that people will share and want to listen to. How many time has Word Crimes been shared? How much similarity does it actually share with Blurred Lines? Although I do wish his video featured Emily Ratajkowski, too. But that’s a minor detail. And has ore to do with me liking Emily Ratajkowski.

Weird Al is probably the first artist I listened to on my own. In my house, we always had some kind of music. I can still remember my parents listening to The Beatles as we cleaned up after a move. I can remember listening to Billy Joel, and that being the first “acceptable” music I really listened to. But there’s something about Weird Al. He wasn’t always cool. And he didn’t care. He was the silly parody guy, who came out with an album every couple of years and that was it. But you know what, he kept doing it, because he enjoyed it. And I think that’s an important lesson.

It’s one I sort of take with my blog and my writing. I’m not delusional while writing this. I know I’ve got about 112 fans on my facebook page. I know I’ve got some loyal readers. I know I’ll probably never achieve the same numbers I did when I was posting daily with Nanowrimo. But at the end of the day, I do this because I enjoy it. Like Weird Al. It’s fun for me. It gets my voice out there. Whether I reach 80 people or 8, I’m glad I’m doing it. And it should be a lesson to all of you.

I still remember when Weird Al came out with his anthem to all things me, White and Nerdy, which spoofed Riding Dirty by Chamillionaire. I don’t remember the exact quote, but when asked about Weird Al parodying one of his songs, he said something along the lines of, “I went platinum, I had a number one song… where do I go from here? Weird Al calls.” So people realize that being called by him means something.

So keep doing what you’re doing, Mr. Yanovic. Your comedy was some of the first for me, and what was what made me want to do more with it while I was growing up. I know you’ve got roughly a billion fans at this point, so one more person telling you to keep going may not seem like much, but your music has always meant a lot to me. And it will continue to work for me for years to come.

Stay Weird.
Posted by Bad Shakespeare at 10:09 AM