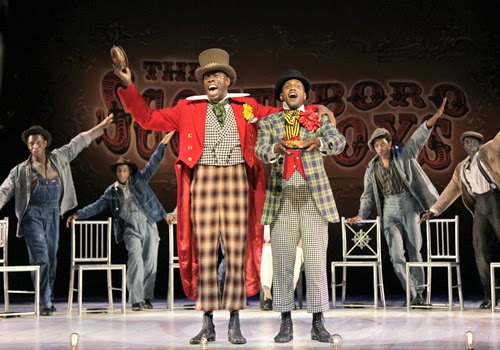 So, I saw a lot of plays in London. As I’ve mentioned before, 11 to be exact. After each show, we (the intrepid class and I) would try to rank them, and it became increasingly difficult to do so, because they didn’t fit a category. Do we like Curious Incident of the Dog at Night-Time for it’s technical wizardry, or because of the acting? Was Knight of the Burning Pestle good because of the fact that it was a throwback? Did the fact that all the dialogue in Treasure Island was yelled take away from the show? (yes. Yes it did.) And as our handsome and still not yet having put grades in the book Professor Rick Davis pointed out, whether we liked it or not was pointless. What did we see? How did it affect us?

That being said, I want to talk about what most of the class (there are always outliers. The ones that said Knight of the Burning Pestle wasn’t amazing are flat out wrong, though) agreed was one of the most powerful productions we saw while we were there: The Scottsboro Boys.

I’m going to give two major caveats before I post this. One, for reasons we are going to discuss, this is a controversial production. Not just for its controversial elements, but because we all like to look back and see the past as beautiful and the present as a rotting cesspool and why can’t it be more like the past. I got some mean comments on Facebook for even saying I liked this musical, not because of what it says but because it shines a light on, let’s face it, an ugly time when guilt was more “the color of your skin” rather than, “did you actually do it.” The Scottsboro Boys were all pardoned. Reasonable doubt hung over the many, many, many trials they endured. This was a powerful production.

Secondly, and this will be a separate post, but three cast members of the show came into our classroom (yes, I actually went into a classroom in London) and talked to us. So, it may seem like I’m heaping praise on a show where I know the cast members, but while they were nice guys, I’m not going to heap praise where heaps of praise don’t really belong. That wouldn’t be fair to them. Or you guys, really, as I’m only going to say about a million and a half times that you should see a production of this, first chacne you get.

Thus, on to the play report.

Seeing the Scottsboro Boys in London is an odd experience. One of the things about seeing a live production is that it’s very much a product of the time it is playing, more so than a movie. At the time that The Hunger Games Part 3: Mockingjay Part 1 (Sidenote: if you’re going to keep splitting the last book up into two in order to make more money, come up with a new title) Phillip Seymour Hoffman was very much alive and able to participate. His death by overdose changes that static ending to the film: Peeta going through extreme withdrawl and gives it a disturbing new meaning (especially as “In memory of Phillip Seymour Hoffman” shows up). Star Trek: Deep Space Nine was filmed as the best Star Trek Series since the original, and was filmed at a time when several characters could be called “terrorist” or “freedom fighter” interchangeably. That won’t change.

We saw The Scottsboro Boys, a play very much set in a time and place in America... in London. England certainly isn’t going to win any awards when it comes to it’s treatment of people with different skin tones, but their experiences were very different than ours. So... it was probably a different experience. When one of the northern characters sings about how much Alabama is awful, there was only one section really laughing, and that was the one centered around where we purchased tickets. Just sayin’.

For those of you who don’t know (and I wasn’t well-versed in this incident) The Scottsboro Boys is the story of 9 Black men accused of raping two white women in 1931. During the first trial, all but one of the defendants was found guilty, but they appealed, noting they actually had pretty poor defense, and noting that none of the medical evidence pointed towards rape. Eventually, the American Communist Party got involved (Communism wasn’t as dirty as a word back then, and it actually worked towards ending racism) hiring better lawyers. More and more the case continued to fall apart - one of the women apologized and recanted her story, the other’s story got more and more outlandish - but they kept being convicted. They were all eventually exonerated, posthumously, sadly, in 2013.

I know... fun subject for a musical, right?

If that wasn’t offensive enough, the whole musical is done in the style of an old-time Minstrel Show. For those of you who don’t know about that well... let’s just say that it has it’s roots in racism as well. (The very, very ends features most of the cast in blackface.) It was a show that often played to Black stereotypes in the south. Many of the cast members were Black, some were White people in blackface.

I should point out that the three people that came into our class were Forrest McClendon and Coleman Domingo who played many, many, many characters... part of the Minstrel show is that several people played one character. They played Mr. Bones and Mr. Tambo, who took on any of the other roles as needed. Brandon Victor Dixon, who played Haywood Patterson also came in as well.

I’ve typed all of this and I think you all know my feelings by now, that it was probably one of the most powerful plays I’ve seen. It’s the only one I can remember giving a standing ovation to (except Knights of the Burning Pestle because I was in the Standing Room Only section, and Treasure Island, but that’s because I was getting up to leave as soon as possible.) It was a reminder of what musical productions could do - more than just put on a spectacle (boom. Used another word, Professor Davis.) it also pointed out a real message. What was done was horrible. And we don’t look back to make us feel bad or to feel that we have to apologize. We look back on this stuff because it’s important to remember it happened, so we can move forward and ensure that things like this don’t happen again.

This show was produced in America a few times. By the time it got to Broadway it was being protested for it’s “offensive elements” by people who probably never saw the show. (I’d bet money on that) The thing is, hell, yes, it’s offensive, and that’s the point. The jaunty songs are meant to draw you in, get you clapping, and then realize the horribleness about what they’re singing about.

I know that one of the bigger elements that people were upset about was the use of the “Minstrel Show” type retelling of this. But the writers used this element to show that the entire trial itself was a type of minstrel show. Medical examiners, witnesses, even one of the “victims” pointed out that this crime couldn’t have occurred. But because it was nine black men... it was easier to just convict and move on, because they were the disposable people du jour. The fact that this is told through the style of the minstrel show... it enhances the experience. It makes it more effective. I get that people don’t want to accept that stuff like this happened, but it did. Forgetting about it, denying it doesn’t help. It just makes things worse.

I also think it’s important to re-iterate that I saw this show in England, which sort of changed the meaning of some of it for me. Again, they don’t win any awards for non-racism (I think people tend to forget, while talking about all the slaves our founding fathers owned, they weren’t suddenly magically imported in on July 4th, 1776... they were imported in by England) but it allowed us, for a minute, to sort of take an outside view of what happened. Yeah, we may throw in an Alabama joke and laugh, but the lack of laughter from everyone else also spoke volumes.

So, will The Scottsboro Boys ever get another shot in America? I hope it does. Social issues are covered in plays all the time. I know no matter what it will be met with protests... sadly. And I know that I’m probably going to get more nasty emails because of this post. I don’t care. Watching as the cast sung “When we going to go back home” was powerful. Watching the screen as it flashed that these men were pardoned - in 2013 - was powerful. It was just a reminder that musicals can have a powerful message. It was a reminder that in order to get a message you believe in out, you may have to step on some toes. It was a reminder that we can’t forget an unpleasant past, we have to sometimes embrace it, if only to ensure that we don’t repeat it. I was a reminder of the power of the stage... something we sometimes forget as we want to focus on what’s “fun.”

Whew. That was a lot more words than I thought I’d type out about this play. I think next week I may jump back to talk about something a little bit lighter. Maybe some more Christmas stuff.
Posted by Bad Shakespeare at 5:00 AM