Book Report 52 Project: A Once Crowded Sky by Tom King 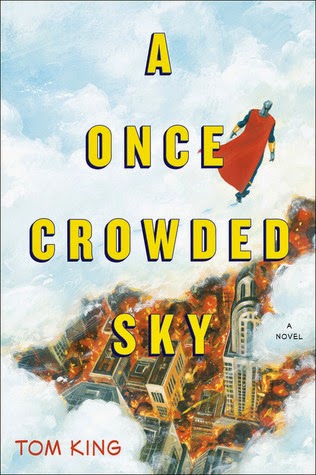 I love comic books and superheroes.

I know. You’re shocked. Shocked. Unless you don’t read this blog regularly, then it may be a bit of a surprise, I guess. But this love of superheroes has given me an odd quest, and that’s to find a great superhero novel, which seems to be increasingly difficult to do. I thought I’d found it last year with Paul Tobin’s Prepare to Die!, but I found it mostly to be a fantasy of an oversexed superhero rather than the compelling portrait of a superhero that has accepted his mortality and just given up.

So, when I heard about another superhero novel, A Once Crowded Sky by Tom King I was very intrigued. All of the superheroes in the world, giving up their powers to fight a mysterious calamity, except one! A hero, the Ultimate, sacrificing his life with all of those powers to stop this calamity, creatively named “The Blue.” (Not making that up. The big problem is a color, found readily in nature.) One hero refuses to give up his power, and to make the twist even better, it was PenUltimate, the Ultimate’s sidekick! And, despite the fact that he refuses to give up his powers... he’s retired! What could have caused him to retire? And what of all the super villains? Will they take advantage of this superheroless world?

Here’s where I talk about another issue that plagues me. You see, unlike most people, I can handle something bad. A bad book? I’ll still slog through it, because even in it’s badness there’s something good, even if it’s enjoying how terrible it is. I remember one particularly bad novel called April and Oliver that was terrible, and yet, I managed to make my way through because I could appreciate it. Bad movie? Hey, there’s a certain fun in calling out just how terrible it actually is. I didn’t enjoy Transformers 4: More Explosions and Inappropriate Glances at a 17 Year Old, but hey, I could appreciate that it’s still giant robots wailing on each other.

No, what I can’t stand is something that wastes it’s potential. Star Trek: Voyager is my least favorite Star Trek series not because it was bad... I still enjoy the characters and the acting is decent... I hate it because of the wasted potential. They could have done so much more with Captain Janeway and her crew.

This brings me back to A Once Crowded Sky. I didn’t hate it because it was a bad book. I hated it because it wastes every potential to shoehorn a superhero story into a fable about the war on terror. And fails. So miserably.

As mentioned, the book focuses on a world where all heroes are tasked with giving up their powers to a vaguely described energy burst that is destroying the world called “The Blue.” The Ultimate sacrifices himself, and his sidekick doesn’t give up his powers because reasons that are never fully explored, because he retired for reasons that aren’t fully explored, and people hate for all of these reasons. If you’re worried that the novel will spend too much time on it, don’t, because the novel spends almost no time on it. There’s one former superhero (that only shows up at the beginning in a very awesome scene, and then at the end because oh, crap, she’s barely mentioned in the rest of the novel and we have to wrap up her story somehow) that seems vaguely mad Pen (as he’s known) but we find out in her brief scene that she’s his ex, which brings in many other connotations to the scene.

There is also the Soldier, who knows the secret behind the “virus” that caused all the super villains to kill themselves when the Blue (God, I hate typing that as a real problem for people to solve) struck. (Spoiler: He did it. And he’s wracked... WRACKED with guilt about it for a few scenes. Easily two.) Don’t get me started on his supernatural sidekick that may or may not be the actual devil and despite the constant appearances and so much potential for the nature of evil and what’s right in a better novel, makes no sense here. Just... none.

The other problem that this novel has with trying to tell a superhero story in a novel form is the fact that it’s too clever for itself. Chapter titles are given using Comic Book Titles and numbering... and there’s a character who can see the future and writes it all down in comic book form. Not drawn comic book form, mind you, but as a writer writes the comic book form, lest you forget that this is based on a comic book. He’s also the only one who knows what the Blue actually is, and for a while it appears that the threat is comic book itself, but... yeah.

The other thing that needs to be addressed is the very repetitive nature of this novel. Not just in form... no, paragraphs get repeated to the point that you can skip entire sections without missing a beat. But also scenes. Entire. Scenes. Not even in a way that is satisfying or to make a point. But let’s take the main hero, Ultimate, and his creation. Once again... spoilers... but you find out that he brutally murdered Pen’s parents while under the influence of an evil villain, and he also brutally murdered another kid’s parents who becomes the super-future seeing guy. He brutally murders so many people that this book that by the end you have to wonder what a “hero” is.

Ultimately, that’s what makes this novel not so “Bad” but “Frustrating” because it wastes so many good ideas... a world without heroes... what does it mean to be a hero... hard decisions... in such a glossed over manner. If Pen has retired, then why does it matter if he gives up his powers or not? What about the countless other superheroes who have given up their powers... how are they affected? There’s an entire sub-plot where Pen is being monitored that is removed in five seconds after the Ultimate brutally murders the guy who’s watching him... why is this dropped? What about the villains? Or the nature of evil. Last week I talked about a novel that starts off in the modern world but then invites you into it’s strange world. A Once Crowded Sky is content to remind you every few minutes that you’re reading a novel, and hold you away from the world at arm’s length. And that may be the most frustrating thing of all.

The Quest for a Good Superhero Novel Continues...
Posted by Bad Shakespeare at 5:00 AM