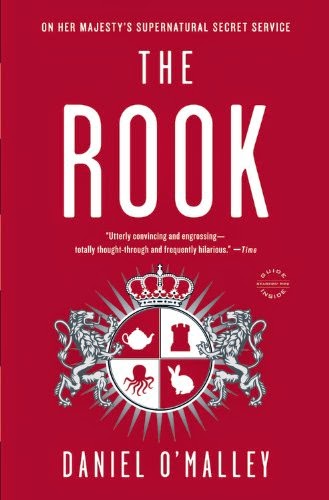 So, imagine you wake up in the middle of a field. You’re surrounded by bodies, and they’re all wearing latex gloves. Oh, and you can’t remember anything about who they are, how they got there, who you are. In your coat is a letter addressed, quite literally... “To You.”

That’s how The Rook, the supernatural superhero novel from Daniel O’Malley starts. And yeah, it sucks you in that much.

When I first started Bad Shakespeare 52, I wondered how exactly I was going to maintain reading 52 books a week, particularly when most of my classes demand I read books for them, and most of them aren’t as fun. The last one I read was about a woman who buys a horse and falls in love with it. Or doesn’t. I’m still not sure what the horse represents in that one.

Moving on, there are no horses in The Rook. Just superpowered awesomeness.

Anyway, my point is that The Rook is not a light book that you can breeze through. Actually it’s just under 500 pages long. So I was surprised I picked it to try and get through in under a week, and I was even more surprised as I found myself not only finishing it, but wishing that there were 500 more words dedicated to these characters.

The woman who wakes up in a field with no memory and apparently the butt-kicking ability to take out a bunch of armed men is named Myfawny Thomas, and it turns out that she knew about the fact that one day, her memories would be taken from her. In fact, a large portion of the book are letters written by Myfawny (Pronounced like “Tiffany,” but with an M. Despite the fact that I knew this because they say it a lot, I still pronounced it “Mi-FAWN-ee” which isn’t anything like the writer intended. Sorry, Daniel O’Malley.) who is an extremely talented administrator, but not one for the heroics of the organization she works for, the Checquy.

Myfawny is a super-powered agent for a super-secret Government organization of people with powers who fight supernatural threats in Great Britain. She has the ability  to control people by touching them, something that her former self never really took advantage of. All of the characters are named after Chess pieces, and she's the titular "Rook" within the organization. There's an amusing bit about how they can't have a King and Queen, since, after all, they live in England, there IS a King and Queen already, so they just go with "Lord" and "Lady" as the highest office in this particular realm.

Yeah, that’s probably one of the best parts of the book, the way it deals with identity. Everything up to her memory-erasure (which is a slow, but exciting, burn) is treated as a separate person. So, in essence, there are two Myfawnys (Myfawni?) who inhabit this book. The capable administrator chosen for her role specifically because she lacks the need to go out and put her life on the line with danger and heroics, and the new one who is trying to unravel the mystery of who the mole is in the organization, her own powers, who this original Myfawny is, and just who tried to kill her and only succeeded in sapping her memory.

Speaking of identity, one of the more creative characters in the novel is that of Gestalt. He... they... Gestalt was born as quadruplets - three boys, one girl, but with only one mind. As such, the book reminds us that Gestalt is one character, one “person” with the ability to jump back and forth in between four different bodies that can be station anywhere. But this also means he/she can control his/her bodies anywhere, and with varying degrees. At one point one body is sitting in a meeting with Myfawny while two of his others are out on missions, and he’s talking his way through it. It’s very interesting to think about what makes someone “a person” when dealing with memory loss and a character that is literally four people.

This is a fun book, too. Myfawny pre-amnesia never took advantage of her powers, despite the fact that she is pretty powerful in what she does. Later chapters (spoilers) have her powers growing to the point that she can take down Gestalt when needed, and that’s no easy feat when he can simply decide that one body will attack you from the back and one from the front. But it plays with superpowers, it plays with the fact that the supernatural world is kind of gross all while also exploring the fact that, yes, they are a fancy organization that has a certain attitude to project on the world. (Why do we keep insisting our super-spies keep wearing 2,000 dollar suits when it’s just going to get covered in bomb-dust? Really, people? go to Men’s Warehouse and pick up a 6-pack of jackets that can get disposed of when you get swallowed by a fungus monster.)

There are large sections of this book that are expository, most of them coming from Pre-Myfawny’s letters to her Post-Amnesia self. That can bog down some of the action, and is used to enhance suspense, but it also serves a pretty fun purpose of dropping minor clues here and there about what is really going on. The cool thing is that the mystery is pretty much laid out in front of readers from letter one, but you don’t realize it until everything has been explained. Including one thing I wondered about, but not in as much detail as we got. Way too much detail.

Overall, the best thing I can say about this book is that it’s a fun read. I heard it described as like Buffy, the Vampire Slayer, which had one of the better senses of humor about the fact that it was about a teenage girl who fought vampires while going to High School. I felt the same way about the Rook. It had a good sense of humor about itself, never took itself too seriously while maintaining a plot that was engaging enough to keep me moving on, even as we got long histories of secret organizations. This is a must read for fans for superheroes, the supernatural, and mind-bending mysteries. I’m looking forward to the inevitable sequel.
Posted by Bad Shakespeare at 6:00 AM