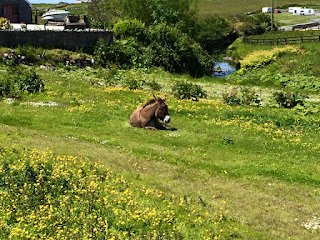 Doolin is an interesting little village. Not really big enough to be considered a town, but not small enough either to be considered “the middle of nowhere” it fits in that nice little pocket where people seem to be roaming through all the time or stopping to admire a few things on their way to another place.

Also, a lot of cows. The cows may outnumber the people that actually live in this town. And if you think that at any moment I feel bad about eating steaks or burgers when this near to so much livestock, it’s only strengthened my resolve. These cows are jerks, constantly mooing and judging me. Yeah, I see you, staring. That’s right, tonight I dine on the sweetest steak… YOU!

Sorry, got a little carried away there.

Actually, Doolin is a nice little area, situated close to the Burren, which I’m not exactly 100% what it is, but it’s beautiful, like the rest of Ireland itself. As near as i can tell most of the town is situated around this one road, and they have not invested completely in a “sidewalk” so the road is only partly functional as throngs of tourists travel down the middle of it, slowing traffic from “it’s usual, “let’s see how fast we can get on those back roads” to a casual, “hey, tourist… why are you in the middle of this road!”

Also, there are pubs. A lot of pubs. And they all have live music, which is awesome.

We tried to take a tour of some of the Burren Yesterday. We saw some nice areas, but to be honest with you, it didn’t feel as great without our hermit guide, Dara, telling us something folksy about each area. We got to see one of those bone cages again, but it was all roped off and we weren’t allowed near it. And then there was the walk, which was about a two hour hike. I made it about halfway before I turned around, mostly because I’m still working off this Irish Death Plague, and also because it wasn’t as scenic as the rest of the tour.

In addition to these pubs, speeding cars, many backpackers, and cows, is the Doolin Donkey.

There’s no lore about the Doolin Donkey. He’s actually quite frankly that, a Donkey who sits in a field, staring ot as the cars pass by him. Usually he’s eating. There doesn’t seem to be too much special about him. He’s very content to just sit in his little acre of land, eating. I haven’t seen him go in at night. He just sits there. Chewing.

The Doolin Donkey seems to have it all figured out. The wall that cages him into his lush greenery, filled with all the grass and flowers he can eat, doesn’t seem very high. I can step over it without much trouble. (Not that I have. The Doolin Donkey seems happy that he is alone in his little caged off area.) But he sits there, every morning, eating grass. And every time we return from school, he’s sitting there again, eating grass. He doesn’t really do much. Once I saw him lying down, and I swear that one other day I saw him trying to stare down a tourist that was looking at him just a little too long. The Doolin Donkey loves his space.

I’d like to feel we’d all be better if we were like the Doolin Donkey. Just sort of relaxing. Not really worried about what’s going on around us too much. He’s one cool Donkey, and he doesn’t need a complicated backstory or the ability to surf. He just likes is space in the field. Keeps to himself.

Not like those jerk cows.
Posted by Bad Shakespeare at 11:27 AM