I originally wrote this post about five days ago, in Dublin, as I sat on my bed (carefully of course… more on that in a minute.) I reflected on my time as the month had passed. I reflected on all the adventures I had. I reflected on the people I spent my time with.

It was actually quite terrible.

I needed time to process just what Ireland meant to me. Like anything, it’s a wonderful experience, but it was not yet over. The classes were over and I was a scant six hours away from boarding an airplane, but for the time being, the event wasn’t over. I didn’t have time to come back to the United States and think about what my time over there meant.

Let’s back up for a few minutes. My final day in Dublin wasn’t spent in the Jameson factory, or even touring the city. My final day in Dublin was spent doing something I’d wish I’d done in London. I got a tattoo. As long time readers know (and short time readers are just now finding out) I have quite a few tattoos. I have a Shakespeare Quote, a Neil Gaiman quote (recently, with his signature underneath it!), a Doctor Who design, a Supernatural Design, and a Superman “S” because all proper nerds need a Superman or Batman symbol at some point in their lives. I chose Alex Ross’s version, which is black and symbolizes Superman’s transformation as time passes him by.

But that’s all a lot of information about nothing. But it’s something I like to talk about, because I like tattoos. They’re a permanent mark. A lot of people don’t understand them, and for a time, I didn’t, either. I thought they looked cool. But I didn’t understand the meaning behind them. Each one is a personal story, and you want a reminder of it. For instance, my Neil Gaiman Quote is from my favorite book, Good Omens. I got it for my birthday, and I remember my buddy Jon and I drove all over the DC Area looking for a place that would do it. We finally found it, and it was going to be too expensive, but he paid for half of it. Later, when I got a chance to meet Neil Gaiman, my friend Kim made sure i not only met him, but that i had a pen and he signed underneath in the perfect spot. I don’t think he was done with the “n” in his name before she was on the phone with an Uber to take us to the tattoo place I’d pre-selected. It wasn’t a great time, it was an epic time.

Stories. That’s what I’m about. So, yes… I had to get a tattoo to remember the time I spent in Ireland. One of the most epic stories I’ve ever experienced.

I went to Snakebite Tattooing in Dublin (which you should go to) and I got a symbol that is a modified version of last year’s Doolin Folk Festival symbol. I thought it important to get a mark in the country that left a mark on me. I didn’t want a celtic cross or a harp or something traditional. The awesome people there actually redesigned it, and it looks beautifully awesome. I’d post pictures of it today, but it’s still healing so it looks… not so great… and the only other pictures I have are when it was first done, and those just look angry. I also want to point out that the only other person brave enough to come with me was Tim, my intrepid roommate for my time in Ireland, who got his tattoo before mine. 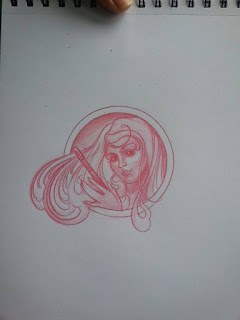 But, I went and did something I’d always wanted to do. It was important to me. So I did it. Snakebite Tattoo was an awesome place, even if it’s off the “tourist area” and you have to ring a bell to go up. The word for it when you walk us is “sketchy” but once you’re inside it’s actually a very beautiful studio. Everyone’s super friendly, and they are quick. They also stayed open an extra hour to finish my tattoo, knowing I was flying back to America in a day. So they’re pretty awesome people. Oh, and they take only cash, which is interesting, but doable.

My next adventure in leaving Dublin came when the luggage I got a great deal on decided to stop working as I walked out ot the plane. First, the bottom completely failed. After several failed attempts to purchase a new bag (it’s the 21st Century, folks. TAKE CARDS) I eventually had to say goodbye to several books and jam back my bag so tightly that the top also collapsed when I got off the plane. But all is well. It’s actually quite comical in the long run.

But then I got back to the United States.

A buddy of mine spent some time for work in Boston. He set me aside one day and said, “Michael, I never felt out of place in Virginia, but I felt at home in Boston.” (Note: I could have easily stolen that line. I still might one day, but for now I’m attributing it to a brilliance other than mine.) I want to echo that. I’ve never felt out of place in America. It’s my home. I’ve lived all across the country. I love this great Nation of ours, just so everyone is clear. But… I felt at home in Ireland.

Firstly, there was a our trip to the Writer’s Museum in Dublin, which talked about how Irish writers were mostly troublemakers. From Oscar Wilde to James Joyce to Flan O’Brien, they’re mostly people who either fled to England to gain a wider audience, or people who did what they wanted and let the chips fall where they may. James Joyce played with things so much there is an entire day dedicated to him. Oscar Wilde was sent to America for the sole reason that people would get a joke in a musical, and people ended up loving him so much the musical ran into… let’s just say problems.

Then… as much as I loved Dublin and wish I had more time to explore, I have to say I loved the times we spent in the Aran Islands and Doolin, small places with vast fields or near the Ocean, places that inspired my imagination. I told my professor this, and I’m going to re-write it here: The words fell out of me. It’s unlike anything I experienced before. I was writing and creating in ways I didn’t know possible. The class was great, don’t get me wrong, but it was impossible to not be inspired as we passed by old castles, as we got lectures about Celtic Rituals, or even as we passed by the Doolin Donkey every single day.

(Yeah… I’m going to do my last Bad Shakespeare in Ireland Post without mentioning the Doolin Donkey. That’ll happen.)

The thing is, I’m still processing how this country affected me. I can tell you that the person who boarded that plane a month ago (I almost wrote “a few months ago”. It felt like a few months ago) is not the person who is writing this post, right now. I made strong connections, not just with the land but with the people who went with me. All great people whom I’m glad to have known. I was able to sit and think without the distractions that accompany my routine here in America.

As long time readers know (and short time readers again, are finding out) I’m a big fan of Star Trek, specifically Deep Space Nine, which was the greatest Star Trek Series ever and anyone who argues doesn’t understand Star Trek. (Another little joke for my nerds out there.) Anyway, there’s an episode where Captain Sisko is talking to his son, Jake, who wants to be a writer. He tells him “When you’re writing, stick your head up every once in a while. That’s life.” To me, that’s what Ireland was. It was this perfect combination of “writing” while still putting my head up and looking around. It was about making a connection to a place that has a long history, not just as in “what really happened” but a history of magic. A history of making things work.

Ok, so, I’ve made references to Superman, Star Trek, Doctor Who, and the Doolin Donkey, this post has gone on way too long. For those of you who are still here, I appreciate it. Regardless, I should probably consider wrapping this up.

The bottom line is: I enjoyed myself. It was what I’ve wanted, which was an epic quest and learning experience, all wrapped up into one. It was a chance to not only find myself, but lose myself at the same time, which we all need to do in order to move forward in our lives. Ireland affected me a lot. I loved every minute of it. Now I’m back, and the real challenge is not to re-create that feeling, but to use that feeling to inform the rest of my life, and to make me a better person. To make me a better writer.

I’m looking forward to creating my own epic quest.

Posted by Bad Shakespeare at 8:13 AM