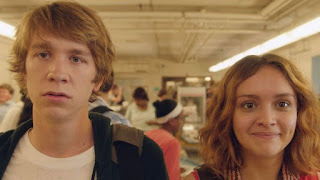 I’m about to do something that most respectable lovers of books and the English Language should be doing. And yet, here I am.

This is a joint Bad Shakespeare Book Report/Summer Movie Season Review of the novel and the movie Me, Earl, and the Dying Girl. Hearing that book was spectacular leading into a movie that was wonderful, I decided to read it on my trip to Ireland so that when I got back, I could see the movie and compare the two. (Writer’s note… although this is all the writer’s note… I am fully aware that a book is not a movie is not a whatever future medium is going to be invented that lets us actually interact with the characters and go up against Harry Potter and his plans to thwart the generous Lord Voldemort, but alas, I’m comparing the two in this case.) And I have to say:

What a wonderful movie.

Which is a surprise, given that the book is so terrible.

(Oh, I also broke the rule about not giving my opinion until the end. This post is all about rule breaking.)

Let me back up. Me, Earl, and the Dying Girl is about the titular “Me”, an awkward boy entering his senior year of high school named Greg Gaines. Greg enjoys flying under the radar and trying to be friends with all of his classmates while not actually being friends with them, thus avoiding the horribleness of high school. He does enjoy hanging out with Earl, whom he refers to as a co-worker, and making terrible remakes of movies that he shows to no one. One day, his mother informs him that one of his classmates named Rachel (some of the backstory is cut out in the movie, but he knew her when he was younger) has cancer, and his mom makes him go over and spend time with her. From there they become friends, and Earl starts showing the movies they made together to her, which cheers her up. Eventually, Greg is asked to make a movie about her. And Greg can no longer go under the radar.

Ok, so I’m doing a dual review, I told you that the movie was great (I’ve seen it twice, two days in a row) and the book is horrible (when my bad wouldn’t close in Ireland, I left the book behind.) I should also note that one of the reasons I’m doing this as a dual review is because Jesse Andrews wrote both of them, which makes me wonder why one is so great when the other was so horrible. Actually it doesn’t, because of one character: Greg.

The story itself in both versions is narrated by Greg, who is the definition of awkward. Tall and lanky, he spends a lot of time making fun of himself. In the movie this only happens a few times because he can only say it to so many characters before someone stops and says, “hey, dude, stop.” In the book, which is told in first person, we don’t have that filter. So, a good portion of the book is dedicated to not only how much Greg hates himself, but also to how no one should be reading the book, and he constantly wants to hurt himself before he moves onto the next chapter. It actually adds another bad layer to the book and sort of starts to tell the story of a guy who needs psychiatric intervention well before he starts talking to a girl with Cancer.

Then there’s the second part of the title, the “Earl” of the story. The movie tones down Earl in ways that are incredible, and make me like the character instead of flipping ahead to see when he is no longer on the page and I can mercifully count down to those pages. Earl is from “the other side of the tracks” naturally, so he’s poorer and has a tougher family situation than Greg. One of the better points in both the book and the movie is that Greg’s father is a layabout college professor who is constantly trying new foods, which touches upon Earl just wanting to eat. in the book he’s unrestrained, making crude jokes every other page and stopping the narrative a lot. In both versions he does dial it back around Rachel, but it’s too distracting in the book. The movie makes him a lot more likable character, someone who is good for Greg because he’s a genuine friend, not someone Greg can just avoid or pretend is a friend.

Lastly… there’s the Dying Girl. Rachel. Hey, spoilers for the book and the film are in this paragraph. You’ve been warned. This is your chance to turn back now and oh… here we go. Obviously, it’s called Me, Earl, and the Dying Girl, and yes, unlike other titles that play around with the idea of the Dying Girl, this one delivers and they Dying Girl does, in fact, die. The situations are very different in the book vs. the film. In the book, she dies after entering a coma a few days after Greg’s movie is shown to the entire school, most of whom hate it despite the fact that he was pressured into making it. In the film, Rachel dies after entering a coma while watching the film with Greg, who has decided to show it to her after she enters the hospital and he was supposed to go to the prom.

The movie ending carries a lot more weight than the book. It also helps to exemplify the problem I had with the book and how the movie fixes all of that. The book ends with Greg trying to figure out just what it is that he learned from all of this, while the movie ends with Greg not really learning anything, but being deeply and profoundly affected by his relationship with Rachel. Having her die during the final screening of it helps to solidify just what their relationship meant without trying to turn it into something it wasn’t. Greg couldn’t fly under the radar.

The book does everything it can to distance the characters as if it’s screaming “THIS IS NOT A TYICAL CANCER STORY! CHECK IT OUT!” Take, for instance, the ending with Earl and Greg. Both versions have them getting into a fight. Both versions have them reconciling. In the movie, they reconcile at the funeral in a quiet moment, and their future as filmmakers is left up in the air. In the book it’s announced they don’t keep making movies, and Earl is “insane” because Greg finally gets to know him, I guess not knowing him since he was a kid or since they made movies together. It’s just distracting to the overall novel.

It’s just odd, because I’ve watched movies from books. Typically, I can separate out the two. Hey, this wouldn’t work in a book because it’s a movie, and this wouldn’t work in a movie because it’s a book. This is the first time I’ve watched a movie and had it correct literally every problem I had with the book. All of them. The characters have more depth, Greg and Earl’s traits are reigned in, it’s more about the relationship between the three characters than about how terrible Greg is. (and in both versions, he’s kind of terrible, but the movie makes you root for him more, rather than by the ninth time he wants to hurt himself instead of finishing his book, you’re rooting for him to just slam his head in the door and get it over.)

So… go see this movie. Now. Like I said, I’ve seen it twice. Don’t read the book. It takes away from this beautiful creation.

And I feel dirty as an English Major saying that. Not as a movie lover, though!