James Bond is an Evil Grocer 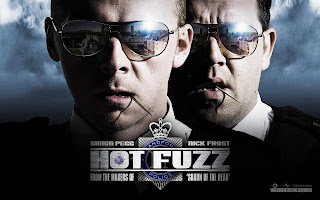 There are two kinds of parody movies. There’s the kind where the writers wanted to churn out a pop-culture spewing loosely connected group of scenes into a movie that’s outdated by the second weekend of release, then there’s the Mel Brooks type where the writers and actors clearly watched every single movie in the genre and crafted a movie that could stand on it’s own, but manages to make fun of every trope, every cliche, every little moment that has even the most stoney faced serious guy laughing.

Edgar Wright, Simon Pegg, and Nick Frost manage to do the latter, every time with hilarious results. Seriously, I have most of the movie memorized, but I still laugh every time, usually at something new.

Hot Fuzz (the second movie in their loosely connected Three Flavours of Cornetto Trilogy) is the loving homage to buddy cop action movies. It’s about a hotshot police officer who is sent to the tiny town of Sanford, where the crime rate is low and the accident rate is high, and of course he manages to find trouble, blah, blah, blah action and everything ends in a shootout, as any great action movie does. (The only real disappointment is that no one falls slow motion off a building, Hans Grueber style.)

You can tell from the first five minutes that Simon Pegg and Edgar Wright have obviously watched all the action movies to prepare for this. Pegg plays his part extremely straight, never really winking to the camera to remind everyone that his is all comedy. Nick Frost does the heavy comedy lifting as his action-movie afficionado partner. (And I've been told I look like him.)

I love this movie. I must have seen if a million and a half times, (I guess this makes a million and a half and one). I love it because it does pay close attention to action movies and makes “fun” of them without really making fun of them. (See also: Hollywood Homicide and Cop Out.) They pay loving attention to them, and like any loving relationship you can laugh at their mistakes without being mean about it. So when Nicolas and Danny dive through the air whilst firing two handguns at the same time (and missing every shot) it’s funny AND it pays homage to movies that have done it in the past.

Plus, name another action movie that would hide two of its biggest named cameos in ridiculous ways?

Absolutely fantastic way to kick off this marathon!

Next Up: Simon Pegg and Nick Frost stretch their acting muscles by playing a couple of nerds pursued by Michael Bluth and a bunch of Saturday Night Live Alum along with a CGI Seth Rogen!
Posted by Bad Shakespeare at 10:54 AM