Shaun Manages to Shamble is Way into Your Heart 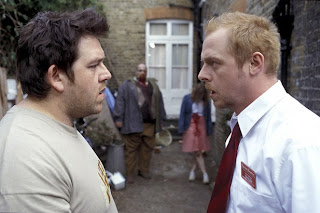 Zombies are in right now. There’s zombie TV shows, all types of zombie movies, including a zombie romance, zombie books... it kind of makes me wonder what type of movie Shaun of the Dead would have been had it come out today as opposed in the ye olde days of 2004 (back before iphones and facebook, back when we were forced to talk to each other in person like animals) when the whole Zombie craze was just newly bitten and had not yet shambled its way into America’s heart the way it has today.

I’ve always enjoyed Shaun of the Dead, not just for the spot on way it manages to skewer zombie movies while crafting a genuinely scary one. Not even because it’s probably the way I’d react during a zombie invasion. Probably because it’s one of the best depictions of what it’s like to be aimless, trying to figure out what you want to do with your life.

Let’s talk about the two best scenes from the movie.  I know they’ve been discussed and discussed, but come on... this is my blog, I get to talk about it. The first one, of course, is the scene where Shaun walks through is day, unaware that all hell has broken loose and zombies are now everywhere. It’s a hilarious take on somehow we just don’t take the time to see what is going on to pay attention to what is going on around us. Yes. It’s pretty obvious. But Simon Pegg plays it off well, probably a little better than anyone should have. Love it.

The other one, and this is one of my favorite scenes of any movie, ever. It’s in the middle of the movie when Shaun and his group encounters his friend and her group. Yeah, it’s an easily telegraphed joke... but it’s one that people don’t think about. In World War Z, one of the things Max Brooks (I can’t emphasize enough.. Mel Brooks’ son) points out is the “Last Man on Earth” Syndrome, where a group of people assumed they were the only survivors of the zombie invasion. I loved seeing this played out by encountering another group randomly like that. (Plus the fact that the show up again at the end...)

Overall, Simon Pegg’s true Simon Pegg-ness is on display in this movie as an aimless dude just trying to figure it all out, and the last thing he needs is this pesky Zombie attack going on.

Shaun of the Dead Bad Shakespeare approved meal: Pub Burger with Fries... after a pint we’ll just wait for this whole spot of business to blow over.

Up Next: Simon Pegg trades in Nick Frost for Tom Cruise, to save the world, and take part in a mission that might not be quite possible.
Posted by Bad Shakespeare at 3:44 PM