Star Trek: The Final Frontier. And the Final Movie in the Marathon 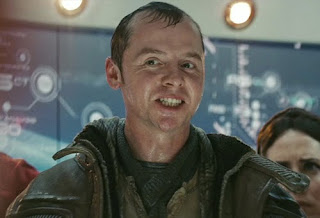 Space. Some have called it “The Final Frontier.” Fortunately, there’s a lot of it to explore, get lost in, and aliens to attack and cause cool space battles so we can be all like, pew-pew! Boom! Beam me up, Scotty! Vooosh!

This blog’s love affair with Star Trek is long, longer than the recently discussed love affair with Simon Pegg. Which is why watching 2009’s Star Trek was perfect way to end today. You all know the story, five year mission, Kirk, prequel, reboot, Spock, you have to wait until the sequel to see Benedict Cumberbatch, blah, blah, blah. Simon Pegg only makes a really brief appearance in this movie as Scotty, the miracle working Engineer who keeps the ship running with a little bit of duct tape and some hope. But it’s enough, he makes an impression that was large enough to give him a much bigger role in the sequel. (Which seems to be standard with most Simon Pegg roles.)

And of course there’s the whole debate about remakes or reboots and how it means that Hollywood is out of ideas, but of course if that were the case everything’s been out of ideas for about 400 years now. But more on that, later.

Sadly, this bring us to the end of our little trip down Simon Pegg lane, and an end to a Very Simon Pegg July Fourth Movie Marathon. So what did we learn today? We learned that while it may not be practical to dive through the air whilst firing two guns, but it’s fun. We learned that aliens are already on Earth, and they invented Agent Mulder. We learned that maybe the pub isn’t the best place to go when the zombies attack. We learned that sometimes changing the room numbers so the bad guys meet in the wrong place can be just as exciting as hanging off a very tall building. And we learned that if you accidentally beam Admiral Archer’s prized Beagle into oblivion, then you should expect to be marooned on an ice moon until Captain Kirk and a future version of Spock comes and beams you onto the Enterprise.

I like Simon Pegg. I liked him before this movie marathon, I like him even more now. Let’s face it, he’s a nerd who gets to live the dream. He’s fought zombies, sat on the bridge of the Enterprise, hung out with aliens... he’s even done some light romantic comedy and worked with the Dude in movies that we didn’t watch today because we decided to limit it to only 12 hours. And it’s a good way to get us in Simon Pegg/Nick Frost time before his new move, At World’s End, opens at the end of the month. I don’t count that as a shameless plug, but really what I’ll be doing in a few weeks. I’m not paid by the studio... not just yet. Oh, the cars they’ll fly that day...

I certainly hope you enjoyed this marathon down Simon Pegg lane. I know I did, but right now  I’m seeing Nick Frost, like, everywhere. It’s probably time to go watch something else.  Thank you for reading and spending this time with us! Join us next July Fourth as I find something equally as ridiculous to blog about.

Happy Fourth of July, everyone! 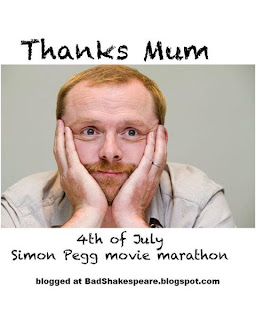 Posted by Bad Shakespeare at 9:14 PM