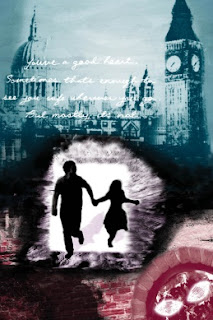 You know when you first meet someone that fascinates you? Not necessarily love at first sight, but more like... fascination. Not at first or second or even third sight, but you meet a person, and through constant interaction or thinking about something they’ve said you just want to spend time with them, and pick their brain further. You want to hang out with them because they get you, the real you, not the person you pretend to be in social situation so no one knows how quirky you are. (Back before Zoey Deschanel made quirky “cool.”)

That was Neverwhere by Neil Gaiman for me.

Quick sidenote, yes, I’m well aware that this was a BBC Miniseries, book, and radio play, so it’s kind of interesting to think that it has crossed through most mediums (Neverwhere: The Musical! doesn’t exist, but it should.) But when I was first introduced to the land of Neverwhere, it was through book form, and it was after reading American Gods. And while I still love American Gods in a different way (I’ve got enough love to go around) Neverwhere holds a very special place in my heart because its was so unlike anything I’d eve read before. Because I was first introduced to this as a book, I’m approaching this post in that way.

So, naturally, when I found out that the Rorschach Theatre was going to do an adaptation of the novel, I was all like... they’d better get the Marquis de Carabas correct, because he’s my favorite character. Also Door. Also Croup and Vandermar. Well, everyone really. I get really invested in fictional characters. (Spoiler: They get them all right, beautifully so.)

Quick sidenote numbah 2: This isn’t a review of the play, partly because I know the actress who played Door... the wonderful and talented Sarah Taurchini, and partly because I want to talk about the experience of it all. But while this isn’t an official review, I can tell you as a fan who’s read the book more than once, had to replace his copy more than once, and who can quote an unnatural amount of it, I HIGHLY recommend this play. You should go get tickets now, because I went to a sold out show and I promise you it’s only going to get more sold out-ier. And keep in mind that if it was even a little off, this whole post would just be a picture of me sobbing.

The plot, for those of who who haven’t read it yet (but will after this post) it’s about a man named Richard Mayhew who lives in London, finds a young girl lying in the road. After he decides to help her out, he finds that... you know what? It’s basically Alice in Wonderland as described to Joss Whedon by Neil Gaiman. (In my mind, Joss Whedon is giving him notes.) Yeah. It’s that awesome. It’s also hard to describe without giving too much away.

Movies, plays, and books are very different mediums. Movies show a lot. Rather than imagining what it would look like when a robot turns into a car, you get to see it, along with Megan Fox and that other guy. Books rely completely on your imagination. You get to imagine the robot turning into a car, and the person driving it is always Megan Fox and not that other guy who’s name I’m too lazy to look up right now. Books can also expand on the world of a movie (like Neverwhere did), unless you’re Peter Jackson, then somehow you can use the world of the movie to expand on the book. But plays... plays are very different. If you saw the strings holding up Tobey Maguire in Spiderman, you’d ask for your money back. If you saw the strings holding up the actor playing Spiderman in Turn Off The Dark, you accept the fact that you are watching the play, get lost in the world, and just enjoy watching Spiderman swing above your head. (and not plummet to his doom in the most cursed play since the Scottish One.)

Great plays do a lot more with less. Especially somewhere like the Rorschach Theatre, which isn’t the largest theater in the world (but manages to make it feel like you’re watching something that is on a much bigger stage). They didn't waste an inch of the performance space. The stage was built around the audience, so at any given time the action could be taking place behind you, in front of you... it was the perfect way to bring everyone into the extremely large, detailed world of London Below. (Where our heroes spend most of their time.) For most of the play, I felt I felt like I was in the action, an observer in the world. Not an observer of the play, but an observer of the world in general... like I was reading the book. (This is probably the highest compliment I can give to a play.) But mostly, it showed without telling everything. There are moments that couldn’t be translated easily to stage, these were easily conveyed through lighting, voiceovers, the actors themselves...

Speaking of the actors, I noted that I expressed concern over actors taking over parts, which I feel is different than say, a film. Actors in a play are closer, more “real” than in a film. But I have to say again: they were spectacular. The creepiness of the villains, the befuddlement of our main character, the snarkiness of the Marquis, and the confidence and heroism of Door... all fantastic. They just worked together to bring this story to life in a way that I didn’t really know was possible. (Yeah, it's sort of review-y. I mean, the experience of seeing one of my favorite books turned into a play was awesome, but at the end of the day it was still a good play.)

Great books live in the world of the imagination. Plays help expand on that (all without the help of CGI) and give you just enough that you know you’re looking at something that’s not real, but you can carry yourself into that world. I’d have to say on all levels, Neverwhere at the Rorschach Theatre more than delivers. Wow. That ending was extremely review-y. But I can’t contain my enthusiasm for a play that managed to deliver a great story while not telling me what I saw in my imagination... just expanded on it.

Neverwhere is currently playing at the Rorschach Theatre until September 15th. Tickets tend to go fast, so you should buy up your tickets today. And if you’ve already seen it, go see it again. And if you haven't read the book yet, this post ends now so you can go read it instead of this.

http://www.rorschachtheatre.com/neverwhere/
Posted by Bad Shakespeare at 4:00 AM