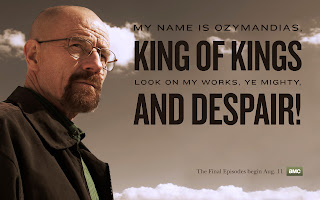 You know, since I started working on this blog while Breaking Bad is airing, I’ve started putting this little tag letting you know that I’ll be covering spoilers. Is it even necessary? I mean, I post these the Friday after the episode aired. That was on Sunday. Did you really manage to avoid everything until then? If you didn’t, then you deserve to have me tell you that the episode ended with Walt turning into a Dragon and attacking Arizona. Grrr. Arrggh.

As you may know, next week is Banned Books Week. Which means we’ll be taking a break from Breaking Bad Shakespeare Fridays. I’ll be doing a special on Monday analyzing if it ended as a Shakespearean piece, or merely as something Marlowe may have slapped together to cover his drinking debts, because screw Marlowe. You heard me.

In the meantime, and in the spirit of Banned Books Week next week, I wanted to take a special look at Breaking Bad in the spirit of banned book weeks. Mostly, this show that I’ve been comparing to a Shakespearean tragedy (because it very much is a Shakespearean tragedy, and there are people with phD’s that agree with me, not just a guy with a blog and three days to fill. (I suppose I could cut back, but here I am...). Many of the themes are the same, the body count is lower than in a lot of Shakespearean Plays, the violence is just about the same, but I think you’d be hard pressed to find someone to put Breaking Bad in a classroom as an example of great literature. (Never mind that Shakespeare didn’t write a word of his plays to be read, he wrote them to be performed, yet we say how Shakespeare is nothing but literature.)

Quick note: some of this post is because of last week’s Breaking Bad, in which we poured some Schraderbrau on the curb for ASAC Schrader. However, I hope that people understood that in an episode that contained a shootout between two DEA Agents and a group of Meth-Dealing Nazis, both DEA Agents being murdered, the brutal torture and imprisonment of a guy, a knife fight between a husband and wife, and the kidnapping of a baby, the helpful censored made sure we didn’t hear any naughty words in the form of ASAC Schrader’s final “Fuck” to the bad guys. I’m glad that we got to think of the kids in the audience not hearing any bad words before Walt confesses to letting a woman die because she was getting in the way of his Meth-Cooking.

That brings me to my point of Breaking Bad and Shakespeare, mostly with violence. The body count in Shakespeare’s plays are pretty high. There’s murder (most foul), rape, suicide (oh, my... the suicide), torture, and one instance of a pie that would make the writers of Saw sit down and say, “hey... maybe Shakespeare should have toned it down a little bit.” At what point do we trade off violence (and some language) for the “literary factor.” Let’s face it, there’s symbolism in Shakespeare, there’s symbolism in Breaking Bad. I can’t stress enough: Walter White should be up there with the great pantheon of Shakespearean characters. He’s got pride, jealousy, no matter how far down the rabbit hole he goes, he’s doing it all for his family and can justify it (until his wife pulls a knife on him.)

So what makes something “literary”? Is it because a bunch of guys in wigs decide that something is literary? (That’s how they do it right? Or am I thinking of the British Legal System.) What makes, say, Hamlet more literary than Alan Moore’s The Killing Joke, which many consider to be one of the best in the medium? Why is Macbeth great art when Breaking Bad is “just a TV Show”? Again, I’m using Shakespeare not just because this blog is called “Bad Shakespeare” and not just because I’ve been comparing the two for the past however many weeks (I’m too lazy to go back and count. Someone do that for me.) but because Shakespeare wrote PLAYS. Things up on the stage for us to see. Things that would be interpreted a certain way because an actor decided that Hamlet should be played as depressed flimmaker in 2000. (Damn you, Ethan Hawke. Just... damn you.) Or because Wesley from Angel should dive in the grass as much as possible while people try to trick him.

I guess I’m getting at the central question I’ve asked plenty of times: Is Breaking Bad literature? I’d say yes. Yes it is. But something like this would be banned from classrooms, because of it’s violence and language. (Oh, and Shakespeare LOVED the bad language. He just hid it better than we do today.) But this violence and language... it’s nothing compared to what we’ve seen in the past. It still has all those juicy elements that I would love to tackle in a classroom, and do so in a way that will help kids learn something about revenge tragedies, fatal flaws, symbolism, and everything that Shakespeare would love to teach us. Because Shakespeare loved the bad guy, and show us what made him tick.

But hey, don’t take my word for it. Here’s Aaron’s speech at the end of Titus Andronicus, where he curses the fact that he can’t do more evil.

AARON. Ay, that I had not done a thousand more.
Even now I curse the day- and yet, I think,
Few come within the compass of my curse-
Wherein I did not some notorious ill;
As kill a man, or else devise his death;
Ravish a maid, or plot the way to do it;
Accuse some innocent, and forswear myself;
Set deadly enmity between two friends;
Make poor men's cattle break their necks;
Set fire on barns and hay-stacks in the night,
And bid the owners quench them with their tears.
Oft have I digg'd up dead men from their graves,
And set them upright at their dear friends' door
Even when their sorrows almost was forgot,
And on their skins, as on the bark of trees,
Have with my knife carved in Roman letters
'Let not your sorrow die, though I am dead.'
Tut, I have done a thousand dreadful things
As willingly as one would kill a fly;
And nothing grieves me heartily indeed
But that I cannot do ten thousand more.”
Posted by Bad Shakespeare at 4:00 AM