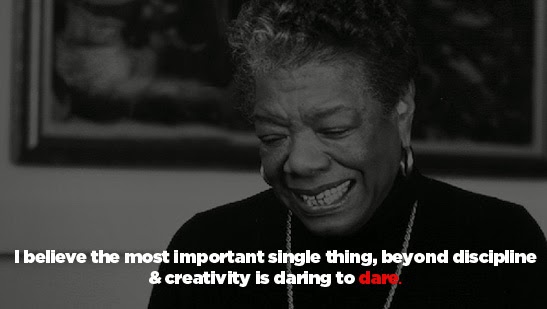 I don’t really “get” poetry all the time.

That’s not to say that I dislike poetry or poetry is bad. It’s just a different type of art form. While I can look at, say, a play, or some other form of prose and pick up that the candlestick introduced on the second page and pick up that by the end it represents the main character’s need to reconnect with their long lost love (it’s a REALLY important candlestick) for some reason my brain is just not wired to always handle poetry in the same way that other people can easily pick it up. I admire those people. To me, poetry is beautiful.

So, like everyone else that doesn't get poetry, when I was asked politely (re: told) to pick a poet to read about of course I picked Maya Angelou. She was the popular modern poet; she was the one to pick. So I read I Know Why the Caged Bird Sings. (Which I didn’t know at the time is one of the 100 most frequently challenged books… good for Maya.) because of course that’s what you did when you were told to pick a poet and you had no idea and everyone else grabbed Robert Frost. But the book helped me understand. I was able to absorb at least Maya Angelou’s poetry after that.

Sometimes, being part of the English/Literature world, we get the rep of just picking something lazy, but digging deep and finding meaning in things can be difficult. Of course, if you get a good program, it will ask you to branch out, so for someone like me that can read up on Chaucer and laugh at the dirty jokes, loves the dickens out of Dickens, and can quote Shakespearean monologues when I’m trying to make a point, poetry - even the sonnets - frighten me. Maya Angelou took away that fear. She helped me understand.

Maya Angelou was an important figure. Some might say because of her civil rights work, her activism, her comments on race. These are important. But for me it’s kind of personal. For the first time in reading poetry, I was able to really feel something that someone had written. I was able to understand, for the first time, the power of a poem. Hearing her read something, being able to hear the emotion in her voice… that’s wonderful. it’s a power that I never understood until I sat down and I listened to her speak. I don’t even remember where, to be honest, it was probably something in one of my classes I was forced to watch at some point. But it stuck with me.

It also helps that she cites Shakespeare as one of the reasons she started writing. Apparently his voice, spoke to her, and at one point referred to Shakespeare as “a black woman.” :)

RIP Maya Angelou. The world’s light is a little bit dimmer today. You will be missed by many, but you will really be missed by this non-poetry fan you converted.
Posted by Bad Shakespeare at 10:57 AM