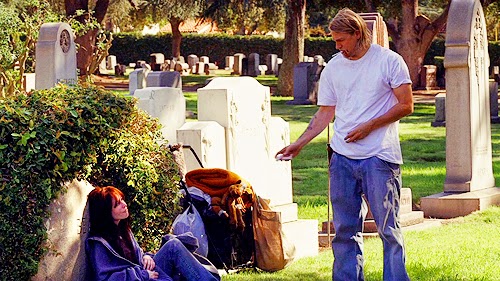 In studying Sons of Anarchy for it’s Hamlet connection, there was one aspect of the show I was wondering how, exactly, I was going to explore. It’s an interesting aspect. Namely, the supernatural element found in Hamlet, and how Sons of Anarchy, a show that isn’t very supernatural (aside from Charlie Hunnam’s magical abs). However, Sutter found an interesting way to incorporate it with the Homeless Woman.

Now, Hamlet isn’t necessarily a supernatural play. It’s actually a play about fathers and sons. (which Sons of Anarchy plays up very well… almost as if they are talking about it in the title itself!) But the whole “hey, there’s a ghost” is actually pretty ambiguous. In the first scene there are three people who see a “ghost” but it’s made pretty clear they’re the night watch and not extremely reliable. In the third act, only Hamlet can see the ghost, and he tells Hamlet pretty much what he’s been wanting to hear from the get-go: kill Claudius. In fact, some productions of Hamlet skip the ghost altogether, and suggest that most of it is in the mind.

It’s important to note here that Shakespeare had no problems in saying when it was time to call in Sam and Dean Winchester to do a little demon slaying. The supernatural drives most of Macbeth, which includes witches, ghosts, a ghost dagger, and an evil cat. (That probably caused most of what happened in the play. Just sayin’.) Midsummer Night’s Dream loves to talk about it’s faeries and other woodland creatures prancing about, mocking us foolish mortals. So I really feel the ambiguity of the ghost in Hamlet is often underplayed by scholars and people who think they know what they’re talking about.

But back to Sons of Anarchy. In the first season, in an extremely innocuous scene, Gemma is leaving a store when a homeless woman starts talking to her, asking for money. Gemma gives her some, the Homeless Woman responds that she can help her kids in a phrasing that scares Gemma a little. Jax later sees her just before Donna’s funeral, as she has covered him up when he fell asleep at the cemetery. It’s important to note that these two characters are the only ones who have an interaction with the Homeless woman as she pops up, and both of their first interactions with her involve them showing her some kindness. She’ll continue to show up, usually when a big decision had to be made, or when there’s a large shift in power or the status quo. (Abel’s kidnapping in Ireland, before the dogfight rescues…)

So… who is she and what does she represent? Is she even real? Some of her possible backstory is given, that she may have been killed when John Teller’s motorcycle collided with a truck. (given in the sixth season).

It’s kind of difficult to discuss exactly who she is, not knowing how the series ends, but I don’t want to wait that long to speculate about her. Knowing that she has a connection to the death of JT, which is part of the show dynamic, and when she shows up, makes her an interesting part of the show dynamic. She’s almost a sign, a signifier of things to come. When she shows up, something’s about to change. In the first season, her appearance comes right before Jax decides he’s going to challenge his mother and step-father for what they have done. She shows herself to Gemma in the second season at church, as Gemma needs healing from her rape and before Jax goes Nomad to escape the current regime. She’s in Ireland when Jax decides to let the nice couple keep Abel. She shows up just before Tara’s kidnapping which results in her hand being destroyed.

It’s very important to note that those last two incidents occur further away from the action. One is in Ireland, the other is on the road to Oregon. And in both instances, it’s only Jax that sees her. So she really does show up in moments when things really are about to change for the Motorcycle club.

It’s also possible she represents some kind of guilt. Her appearances, while coming at a time of change, usually come at a moment when something bigger has happened, something that needs to be aired either for the good of the character, or the good of the club itself. Not always big.

The show’s creator, Kurt Sutter only has glib responses when asked about the Homeless Woman, and rightfully so. She’s obviously a symbol of something larger, and to be just “told” what she represents takes away what she means.

I’m interested in finding out what she represents in the larger picture, and that can only really be told after the fact, when the show closes out. (possibly with the death of Gemma and Jax. Sorry, kids. It’s going to have to happen.) It’s possible that the last scene of the series is going to be her walking away from all the wreckage. Or maybe she’ll be seen by one of the boys who stands to inherit the Sons of Anarchy gavel from Jax in many, many, years. I’m not sure.

I’m glad that this detail was added to the show, it adds another layer of complexity to a show that can be too easily written off.
Posted by Bad Shakespeare at 3:30 AM

Email ThisBlogThis!Share to TwitterShare to FacebookShare to Pinterest
Labels: Hamlet, Sons of Anarchy