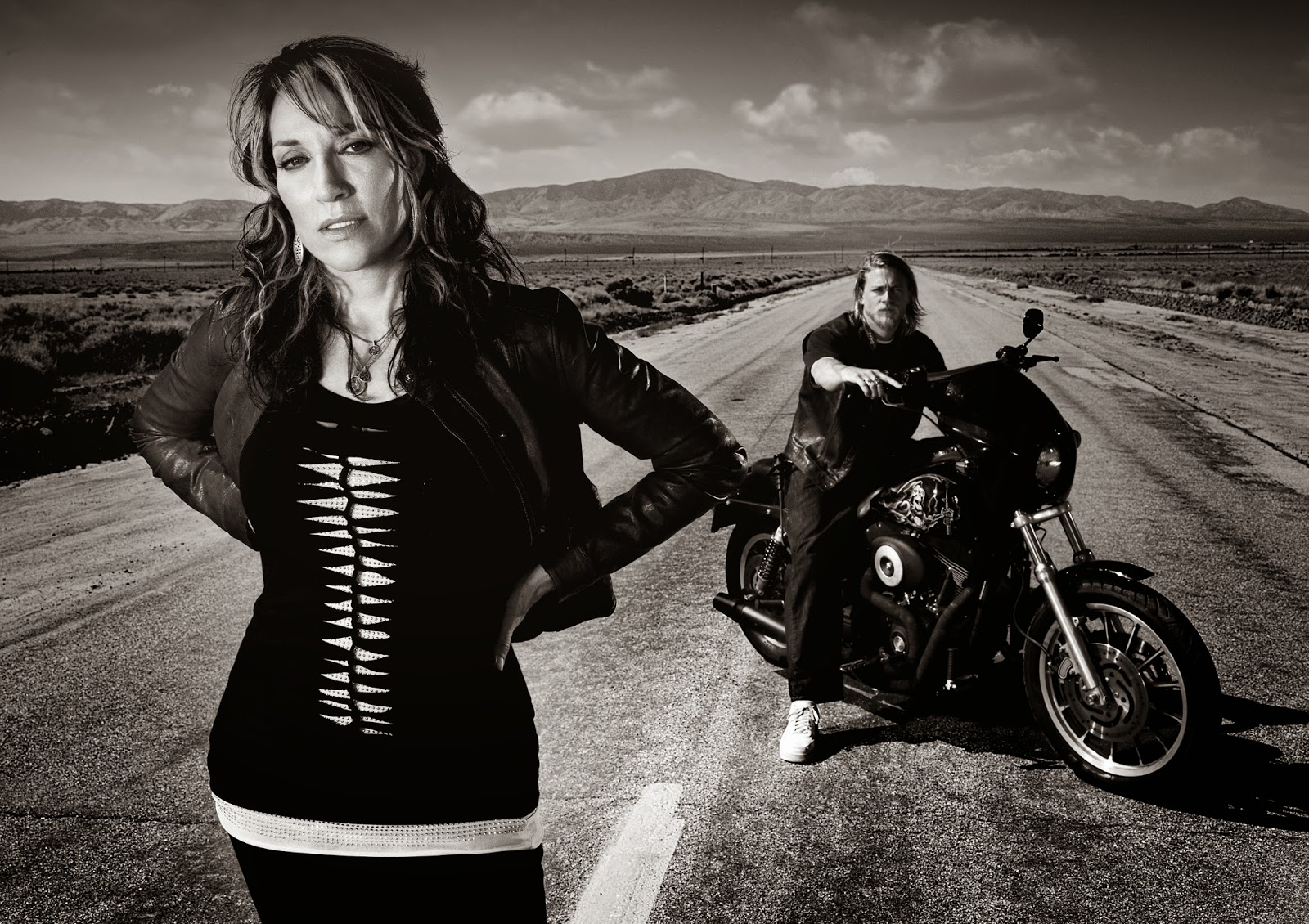 When I was first told about Sons of Anarchy and the Hamlet connection, I wondered about setting the play in motorcycle club. Mostly because Hamlet takes place in a society with a very rigid set of rules: there’s a dude in power, there’s a dude who wants power, and there’s a guy who kills the dude in power then steals his woman, and the only one batting an eye about the whole thing is Hamlet, and ultimately it’s because he may or may not have seen a ghost. I didn’t think it could be done, I was just wondering the hierarchy, or at least the world that’s been created and they’ll do the father/son, ruler/follower, mother/son dynamic. Kurt Sutter hit it out of the park by establishing all the rules in a Motorcycle Club like Sons of Anarchy, whether real or made up, and they all makes sense.

That of course, brings us to the Gemma character. One of there rules of the society is that nothing is kept from the “Old Ladies” or the women that stand behind the men. In fact, their role of keeping the club together, even if it’s with a “family dinner” is established from the beginning. The women of Sons of Anarchy are treated with respect, or else. Yes, some are treated like property, some are treated badly, but rarely does something happen to one of these women without some serious, serious payback.

Spoilers, by the way, for some of the later seasons. I’m caught up through season 5, and yes, I know what happens in season 6. With a fork, people. A major death happens with a fork.

Gemma is the matriarch of the Sons of Anarchy, father to our Hamlet Jax, formerly married to our Hamlet, Sr. John Teller, and currently (at the start of the show) married to club president, best friend to John (one might say… brother) and step-father to Jax, Clay. She definitely knows what is going on within the club, very little is kept from her for very long, and she clearly knows the scheming that Clay is doing most of the time.

This includes, of course, the fact that Clay killed John Teller before the show started, and most likely had a hand in it.  (Like I said, spoilers.)

She has her share of bloodshed as the show goes on. One of the more disturbing story lines involves her kidnap and rape to “send a message” and her refusal to speak about it until she absolutely needs to. (It brings together Jax and Clay on a key issue, when Jax was about to leave due to.)

These are all interesting choices for a “Hamlet” type show, especially as Gemma is in the Gertrude part. The play Hamlet leaves the door open for a lot of interpretation, including whether or not Hamlet saw a ghost, but also just how much Gertrude was involved with everything. In some versions (or according to some scholars) she was a co-schemer, wanting to kill her husband to get her lover, his brother Claudius to the throne. Some believe that while accidental, this is why she ended up drinking the poison first.

However, a vast majority play her off as someone who does’t know what’s going on, oblivious to Claudius, and wanting nothing more than to remain near the seat of power, so she remains with Claudius. (Some still think that he just offers her a kind ear.) It’s really up to the person interpreting Hamlet to think about Gertrude as a character. It’s telling that Hamlet, while making up his mind for 400 pages, puts most of his rage against Claudius not his mother.

Kurt Sutter, the creator of Sons of Anarchy, never shies away from the fact that Gemma knows what is going on. She covers up her involvement with JT’s death whens Tara (Jax’s “old lady”) finds the letters. She is clearly aware when Clay’s involvement ends up in the deaths of Opie’s wife, and in fact works to hide that fact. She’s just as scheming as Clay.

This is sort of a bold statement for a TV Show. Here you have a character that would be extremely easy to cast someone in the oblivious role and sort of play it off as Gertrude has been played off a million times: loyal to her man (as Gemma is) loyal to her kingdom (same thing) and loyal to her son. (Gemma.) But instead, Sutter when all out with it and said: where we go, Gemma is in on it, and she’s probably just as scheming and probably just as evil as Clay. Remember, one of the earliest lines of the show (and one of the best for me) is “let’s make sure he’s listening to the right father.”

Especially in later seasons as Clay (spoiler) loses his power and dies, she’s still scheming. It’s almost as if Sutter has positioned her to be the ultimate big bad of the show, the ultimate villain.

In this interpretation, is he trying to tell us something about Gertrude? I like to go back to the source material at times, and this is no different. I’m really enjoying thinking about this differently… While Claudius is scurrying around the castle, worried about Hamlet, and Hamlet is putting on fake plays and taking forever to decide to act, maybe she was scheming? Maybe Gertrude is the true villain, dispatched before she can release her real plan… remember, Hamlet is filled with rage when he fights Laertes, and he knows his Uncle-Father is responsible for the death of his Father. (or at least suspects it.) No matter who wins the duel, she can still remain in power, possibly with a lot less pressure. Sutter seems to have had this deep reading of Hamlet, and potentially put all of that into Gemma.

Again, this is deep reading, but I find it to be interesting. Yes, we have a danger when we take a show that’s “inspired by” and try to match up all the pieces… I don’t think SOA has a direct match for all it’s characters in the show, but perhaps this is a cool way of showing us some interesting insight not just into a character on the show, but into a character so deeply entrenched as an innocent victim of Hamlet’s cycle of revenge, it’s something worth checking out.

Bravo, Mr. Sutter… Bravo.
Posted by Bad Shakespeare at 4:00 AM