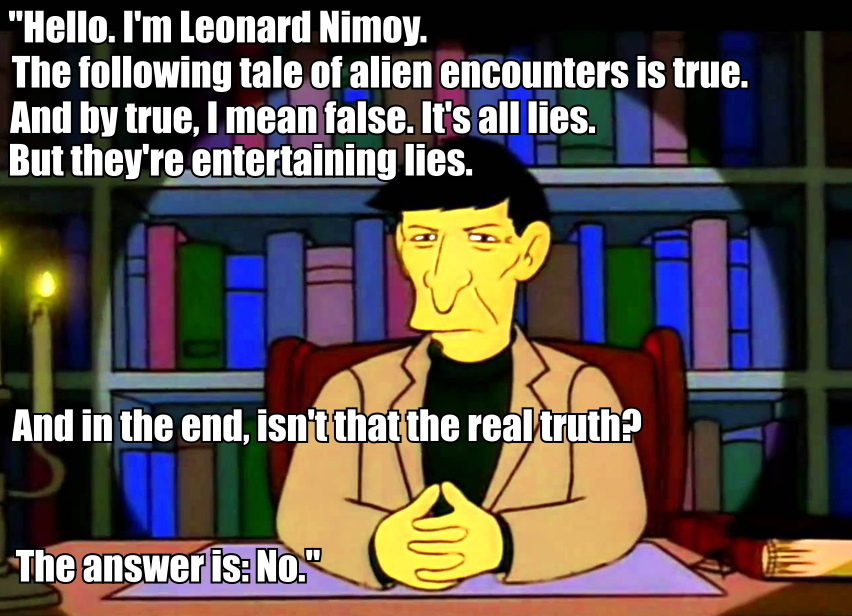 Time once again to pull the curtain back on how I work on Bad Shakespeare. I do these about a week in advance. So, I wrote all about my adventures watching George Takei... and then Leonard Nimoy passed away. Sometimes, I’ll have time to go back and  rewrite things, but the whole Grad School thing will get in the way. I debated with myself if I was going to do a Leonard Nimoy tribute. Then I thought about it and realized it was my blog, and I can pretty much do what I’d like with it. Boom Don’t like it? Start your own blog. That’s just one of the things that make me so great.

Back in the 1960’s NBC had a bit of a problem on their hands. This really cool new show was about to debut, then get cancelled, then get renewed, then get cancelled again, the spawn a television, cartoon, movie, book, and convention franchise that would span past 40 years. I don’t think they knew that last part. But there were two giant problems. This strange vision of the future featured a woman as second in command of the ship, back when the idea of women wearing pants was strange (it’s ok, they got around it with moon boots and ridiculously high mini-skirts that I guess make space-travel easier) and a strange alien on the crew that, when viewed in black and white, looked vaguely like the Devil. (Although McCoy might agree.)

But, Gene Roddenberry stuck to his guns and made sure we still got the alien on the bridge of a futuristic starship as it went on it’s star trek.

Joking aside, Star Trek was the very first science fiction show I watched. It was with my dad, and this was back when wearing a starfleet tunic to school would get you beat up rather than “hey, cool shirt? Which character is J.J. Abrams going to sneak into the next movie and unnecessarily hide from everyone?” So, I guess the first experience I had with science fiction aliens was Mr. Spock, played by Leonard Nimoy.

Mr. Spock was an important character for me growing up. I was always kind of weird. I didn’t even fit in with the theatre kids most of the time and they pretty much accepted everyone. But Mr. Spock was of two worlds... to Vulcan to be human, too human to be Vulcan. But you know what Mr. Spock did? He did what he wanted. He did what he “felt” was right. He didn’t allow himself to be bullied or swayed. He stood up for himself, and he did so unapologetically. Mr. Spock was important.

I bring this up because, in Leonard Nimoy’s passing, it is important to look back on this iconic role and realize what it meant for a generation. Yes, on the one hand it was kind of cool.... look everyone! An alien mixing it up with a Russian guy, a Japanese Guy, and a cool, suave, All-American Boy! It’s the future! There’s hope we’ll all get along one day. Maybe. We’ll all need to go into space and almost get killed by genetically engineered supermen, but we can do it.

I get that he was more than this one role... he was a talented actor who did Shakespeare... but this was more than a role. It was an iconic performance. Anyone can take a role, but it takes someone special to have an iconic performance. And one that meant so much to so many. Especially to a kid, watching reruns of a 20 year old show on Saturday afternoons with his dad.

I think that’s why we turn so much to Star Trek, even today. Yes, the older episodes have cheesy special effects... the newer ones have so many lens flares... and let’s not get started about the Benedict Cumberbatch/Kahn situation. But for all the hope in humanity and green skinned alien chicks, there was Spock. There was that outsider who did what he needed to do, not because he wanted to do it... because it was him. I don’t know that anyone other than Leonard Nimoy could have done that. We’ve seen other Vulcans pop up on the various shows... no offense to Tim Russ or Jolene Blalock, who brought their own Vulcanness to the show. But Spock... Spock was just different. He was the first.

So, it’s with this heavy heart that we have to say goodbye to Mr. Nimoy, a talented actor and friend to the fan. We have to say goodbye to the man who spent so much time on a role, playing it pretty much until he died. I mean... what can you say about a man who is the only thing to survive the complete reboot of a franchise?
Posted by Bad Shakespeare at 5:30 AM