Think of it as leaving early to avoid the rush.

So,  I was going to write a loving tribute to Terry Pratchett for today's post. It was going to talk about his work, his influence, his quotes, and ultimately, what he meant to me as a writer. I got about halfway through, before I realized, I don't think he would have wanted that. I think the greatest tribute to the man is for you to put down this blog today and pick up one of his books. There's 40 alone in the Discworld series. Go read one of them. Soak in what the man had to say. Look at how he personifies Death. He wouldn't want us dwelling, he'd want us living.

Instead of a full blog post today, I'm going to post one of my favorite quotes from him. It had nothing to do with the many quotes about life and death that have been going around. No, this is simpler, and something I'd like you all to focus on today. 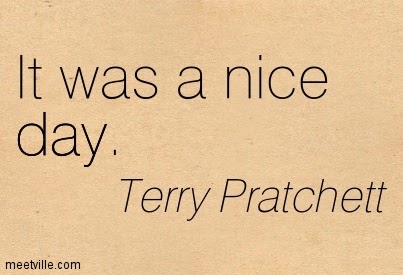