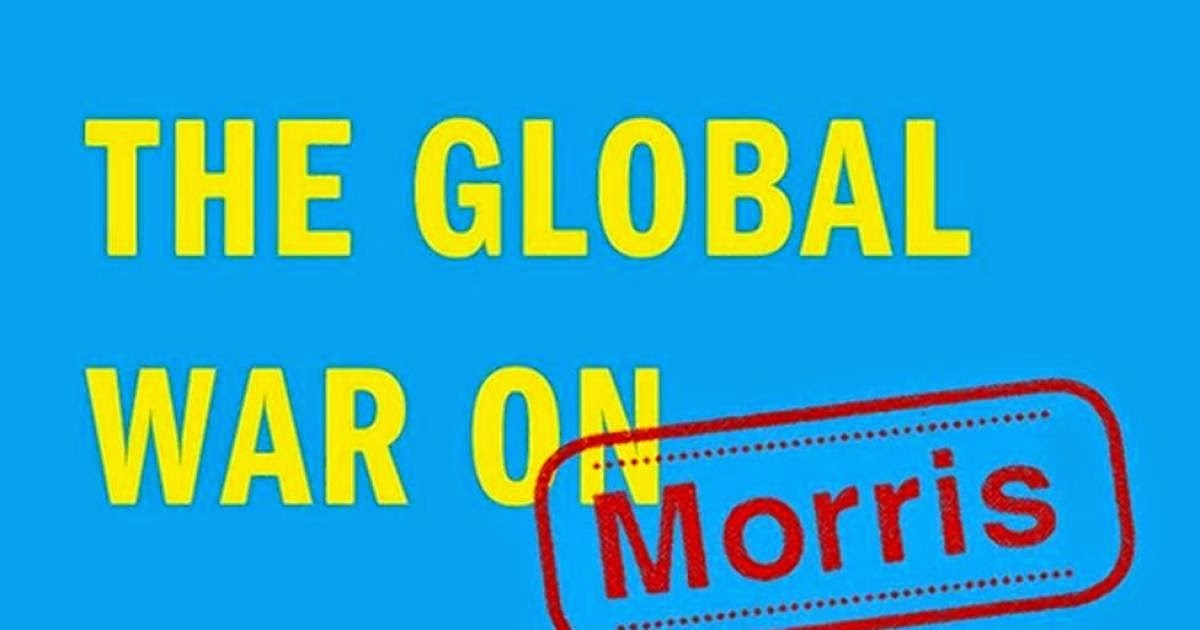 They say you should never judge a book by its cover. “They” whoever the nebulous “they” are can say that all they want, but at the end of the day you’re going to look at the cover and if it’s really appealing, you're going to go out and buy it. It’s just that simple. I’ve done it. You’ve done it. The person sitting next to you has done it. Which is why I wasn’t surprised when, on a cold day in December, I drifted over to a book called The Global War on Morris by Steve Israel. (Yes, the sitting congressman. No, I didn’t realize it at the time. No, still not really pushing my politics on anyone.)  I read the back and was immediately hooked.

The Global War on Morris is a book about… well, a global war. On Morris. If only it were that simple. The book is about a married, bored, pharmaceutical sales representative that gets wrapped up in a web of terrorism, late night hotel room visits, baseball, and a very angry computer named NICK. Morris doesn’t want a lot out of life, he wants to get home, watch baseball, order some Chinese food, and sit lifelessly on the couch with his wife. He does’t want to make waves. Ok, so occasionally he wants to flirt with the pretty receptionist at one of the offices he frequents. This flirtation eventually leads to Morris being on everyones radar, getting wrapped up in a terrorist conspiracy involving a terrorist cell in Florida, and eventually catching the eye of NICK and Vice President Cheney.

Yeah. It’s that kind of novel.

The first thing that struck me about the book is just how funny it was. Even the scenes of Morris, sitting at home trying to watch the Mets, were full of fun, little observations. And a book that includes a terrorist cell has some deft writing to do if it’s going to be really enjoyable. A nice touch points out that weary terrorist Hassan will kill the American infidels, but until then, he will keep them dry has he works from his towel shack in a fancy hotel.

The plotting in this novel also works a very interesting act as well. I’ve mentioned many times that yes, Morris is a man that doesn’t like to make waves. That would seem to keep him far away from the terror watch list… after all, what kind of man who’s life’s greatest ambition is to stay below the radar would end with him gathering the attention of one of the funniest, and sadly underused character in the novel, supercomputer NICK? The plot requires a series of connections, some of them very thin, but believable. For instance, NICK first notices Morris because of his illicit flirtings (and maybe a bit more) with cute receptionist, who had previously been on a date with a known drug smuggler. NICK puts these together, “pings” Morris, who is then pinged again when his daughter is arrested, etc. These connections are weaved very well, and it’s interesting to see how they are all pulled off.

Sadly, though, that leads to the most glaring disappointment of this novel, the ending. I’m going to keep it spoiler-free, mostly because the ending is interesting at least, but all of the comedy, deft plotting, and all around fun of the novel is quickly sucked out when Morris is finally caught up to by various agencies that are out to get him. One of the funnier recurring gags are the sheer number of agencies just not talking to each other, and the resulting chaos. But it is almost as if Israel wanted to rush through the ending, rather than taking time to wrap up these stories.

I was also saddened to see NICK, the computer, be used so little by the end of it. A great concept - chapters are written as NICK is given information, making little observations here and there, and then suddenly, NICK just goes away.

Israel also uses a large amount of his experience on the hill to take shots at Former Vice President Cheney and George W. Bush. I felt overall these scenes were a bit “meh” and about 5 years too late. There was some comedy to be mined from all of this (and some of the Cheney scenes were actually really funny) but more could have been done to preserve the comedy that had been built up until these moments brought the book to a grinding halt. Overall not terrible, just wildly out of place in 2015. (the book was published in 2014. I’m not THAT behind in my book reading. Ok, I am.)

None of this should take away from the fact that the book is genuinely funny, and difficult to put down. I read it in almost one sitting, actually laughing out loud at a lot of parts. Again, Israel throws a lot of stuff into the little details, such as agency incompetence or just the fact that we don’t know who we are dealing with at all times. Overall, it’s an interesting experience. I may have to go back and read the book again, just so I can pick up on all the little details stuffed into its pages.
Posted by Bad Shakespeare at 6:00 AM