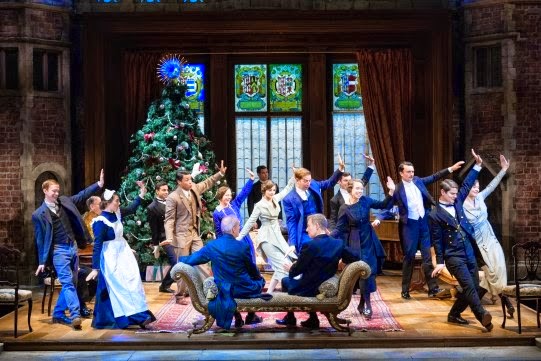 So there I was, watching the Royal Shakespeare Company in Stratford Upon Avon put on Love’s Labour’s Won, more commonly known as Much Ado About Nothing…

I struggled for a while on how I was going to start this post. Then I realized that the best way to do it was to jump right into it, because, I star Bardolator that I am, who has willingly sat through more Shakespeare productions than I can count, was now sitting in the Bard’s HOMETOWN watching the acting company DEDICATED TO HIS WORK, putting on a performance of my FAVORITE play of the Bard.

Essentially I was in William Shakespeare Nerd Heaven.

A quick bit of background that we’ll get into more detail next week (spoilers), but to help you out this week. William Shakespeare was born, grew up, and had a house in Stratford Upon Avon, but his theatre, the Globe, was located in London. Which means he was a commuter, going to London to put on performances and fall in love with Gwyneth Paltrow, but the RSC Theatre was placed in his hometown. So, this was still the closest I was going to get to William Shakespeare without a time machine, and The Doctor and the TARDIS doesn’t seem to be heading my way any time, nor does Doc Brown in his Delorean. Also, something something phone booth Excellent Adventure.

Also, the big debate: Love’s Labour’s Won vs. Much Ado About Nothing. So, William Shakespeare wrote a comedy called Love’s Labour’s Lost, which is all about several princes that take a manly vow of chastity while deciding to pursue their studies, and naturally they meet the loves of their lives because Shakespeare invented all 1980’s sitcom plots. The story ends, unlike many of his romance/comedies WITHOUT a marriage. So, for a while a lot of people thought that there was a “lost” play in which they returned, more hijinks ensued, and then marriage. Some people thought that Much Ado About Nothing was the sequel, and it got a weird name. Others don’t care, and just want Joss Whedon to do another black and white adaptation.  However, Much Ado About Nothing is sometimes called Love’s Labour’s Won. The RSC, because they’re cool like that, simply paired the two up together and set them during World War 1 because England is acknowledging the 100 year anniversary since World War 1.

As I’ve mentioned before when I reviewed Joss Whedon’s black and white version, Love’s Labour’s Won tells the story of a group of soldiers returning from War. (in this version. World War 1.)  They settle into the home of the wealthy Leonato, when the young Claudio falls in love with Hero. Don Pedro, Claudio’s… leader? General? It varies. Convinces her to fall in love, and as they pass the time they try to set up Benedict and Beatrice, two former lovers who are at a “merry war” with each other. At some point Don John, the Prince’s brother decides to intervene, but everything gets wrapped up in about half an act or so.

Quick note: I get some pushback a little bit because I throw in the idea that this is one of his lighter plays, because towards the middle, through Don John’s boredom, he tries to wreck the marriage of Hero and Claudio by tricking him. And it is a pretty rough scene. But I’d like to point out that the whole “Hero is a cheating whore” scene lasts about five minutes, long enough for the Friar to say, “yo, something’s not right.” I stand by my assertion that ultimately, this s a bunch of bored people doing things to alleviate the boredom.  No sword fights, no real stakes, other than the brief mention that Hero and Claudio may not live happily ever after, and hey.. what’s a few brief death threats against friends?

As I’ve said, this show was set in during World War 1, which I felt added some gravity to the situation. One of the issues with doing Much Ado/Love’s Won is the fact that these are very rich people doing very rich things, and essentially dealing in parties.  The characters are fun, but sometimes they’re difficult to relate, even though in the end, it’s the dumbest, poorest dude that ends up saving the day. No one’s bad behavior is punished… Hero marries Claudio and is waved off as “oops, my bad” and even Don John who’s motivations range from “cause I want to” because “Shakespeare must have been all out of motivations for the day” doesn’t get punished until, as Benedict calls it, “tomorrow.” But setting it during World War 1, these aren’t just rich people, these are soldiers that have seen enough.

This does help solve the problem I mentioned earlier, too, by making Don John more than just a one-note villain, but by giving him a limp and the indication that he was wounded while the others were spared. The actor playing him was amazing, and brought some depth to a problematic character.

Of course, no production of Much Ado/Love’s Won could be complete without mentioning Benedict and Beatrice. The love story of Claudio and Hero and their whole plot is pretty much to the side while watching, quite frankly, a very modern war of the words between the two. They nailed it. Because it was World War 1, Beatrice was played as more of a “new woman” being the only woman in the cast to wear pants. But the two actors who played the parts clearly  had clearly fallen into their roles wonderfully, and you got the impression that it was two people that had known each other. I mentioned earlier that they don’t really have sword fighting or a lot of action in this play: these are the scenes that make it up. Loved them in the roles, and I could have watched them spar for hours.

The only detriment to the entire production, sadly, was one of my favorite scenes. In the play, Don Pedro, Leonato, and Claudio decide to trick Benedict and Beatrice into falling in love. These are typically some of the most comic scenes in the play, with the actors hiding on the stage in plain view, and it being evident to the audience what is going on. In this version, they decided to have Benedict hide early, then mug for the audience while the signature song “Sigh No More” was being played. I’ve heard a ton of versions of this song… jaunty from David Tennant and Catherine Noble.  A jazzier version in Joss  Whedon’s version. I’ve heard it more traditional. I’ve heard it fast, I’ve heard it slow.  And this version when with a slower, more somber version, which is fine. But to have Benedict hide behind the curtain and make faces… that took me out of the play a little bit. Fortunately it was made up later, involving a Christmas Tree.

So, if I were you, I’d go see this version. What? It’s in Stratford Upon Avon and you CAN’T go see it? That’s where you’re incorrect, my friends. This AND Love’s Labour’s Lost are playing via the Globe Theatre on the Screen project. So, this is playing across the country in the next couple of weeks. So… here’s an early review. Go to your local multiplex and see if it’s playing! Then stick around for that new version of Cinderella. That’s not bad either.

Email ThisBlogThis!Share to TwitterShare to FacebookShare to Pinterest
Labels: Bad Shakespeare Takes England, Much Ado About Nothing, Shakespeare