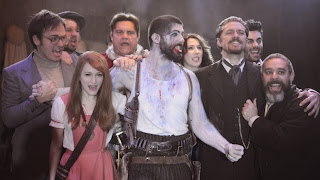 A horse walks into a bar. The bartender says, “Why the long face?” The Horse replies, “Alcoholism is killing my family.”

Once you’ve heard all of those, then you can laugh at the joke I stole from one of many places.

I tell this long story so you kind of had this idea in mind when our intrepid group of London Studiers went to go see Stephen Sondheim’s Assassins at the Menier Chocolate Factory.

Quick upfront, yes, it’s a converted Chocolate Factory that isn’t really close to any bus or tube line, so we had quite a walk. And no, it’s not a Chocolate factory anymore, so no one was sung off by Oompa Loompas after suffering an ironic fate. Although I don’t remember seeing Augustus after that part of the trip, and I was asked not to talk about him.

Anyway, I bring up the whole part about humor because this was a very unique experience: We’re watching a very “American” play set very much in America. It’s about the people who have either assassinated or attempted to assassinate the American Presidents. It starts with John Wilkes Booth and goes all the way up through Lee Harvey Oswald, interplaying the whole event through the guise of being a carnival game. It’s also a musical, so they are gleefully singing about killing various Presidents, and its an interesting look at the “other side” of the story - that is no one is arguing that these weren’t bad people, but they also weren’t cartoon characters who decided to kill someone simply to sell more action figures - They had motives. What were they?

I could do the billionth review of the play itself, but why bother? The cast was awesome, the songs were catchy, and the entire production was just wonderful. The Chocolate factory is set up so rather than a traditional “stage” and an audience gazing up, we were all seated around the stage. This added to the carnival like atmosphere of the production. I was fortunate enough to be sitting in the very front row, so I got right close up to the action, including the several times they aimed guns right at the audience.

Oh, yeah... the guns. So, because guns are controlled more heavily in London, theatres that are putting on plays need special permission to actually have them on stage. So it’s a little more shocking for a London Audience to see them. Also, since their is less chance they’re real, they get pointed in the audience a LOT more. Not even a little bit more, but like, I’ve never had a gun pointed in my face quite as much as this. Not that I’ve had many guns pointed in my face. But it’s one of those interesting cultural things I was telling you about earlier.

It’s also very interesting to view this in England, just as I mentioned with the Scotsboro Boys. There were clearly jokes that the English didn’t get, particularly one about Massachusetts. We were able to meet some of the people after the show (including Catherine Tate aka Donna Noble from Doctor Who and it was AMAZING!) and one of them Michael McShane (who’s an awesome dude), commented that “yep, I knew there were people from America as soon as that joke landed!” Or something like that. At this point it’s May, and I should have taken better notes about my time in England. But there are a lot of jokes that are based towards Americans, and there were a lot of dead spots (no pun intended) that I actually thought were pretty funny. (Ok... maybe a little pun intended.)

This was one of the final productions we saw while we were in London. I’m kind of glad that it was a bit later, this was a very “American” play. I don’t say that to categorize it in some way, just that its interesting. It’s a play that relies very heavily in American Politics. It’s sort of like if I went to see the original House of Cards and wondered why they donned all those fancy wigs before throwing reporters in front of trains. (I’d say “spoilers” but the show has been on Netflix for a billion years. If you haven’t watched it already, well, then... what are you waiting for?) I kind of wish we had spent a lot more time discussing the fact that this was a weirder experience, watching something so deeply rooted in a country I know, but the person sitting next to me may not know. (metaphorically speaking. I was right in the middle of several classmates. I don’t know how much they knew about American History, but it was presumably more than the person sitting further away that didn’t study it at all.)

Oh, and I’ll let you know if we ever find Augustus.
Posted by Bad Shakespeare at 4:13 PM